"Bored to Death" hits its stride

In its second season, Jonathan Ames' comedy gains steam as it charts the perils of the writer's life 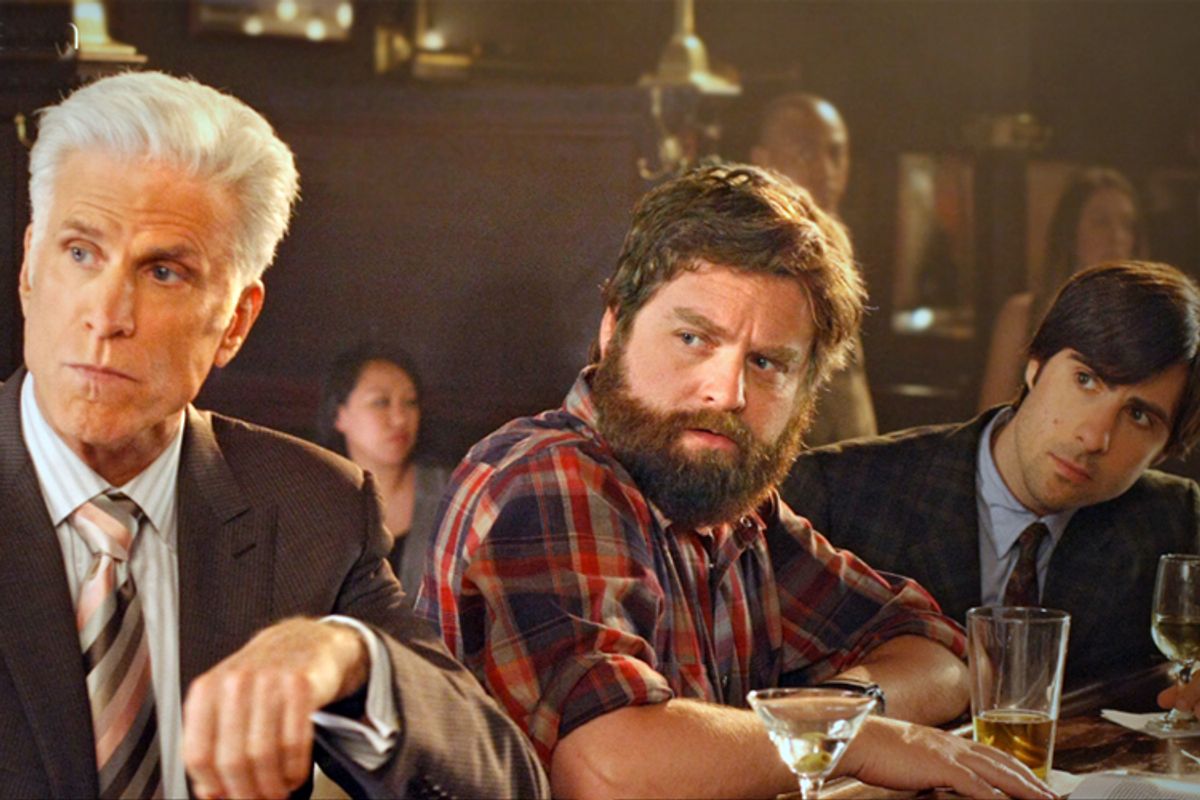 Writers need day jobs. This is the moral of HBO's "Bored to Death" (10 p.m. Sundays) and the moral to the story of every writer you'll ever meet, from paid professional to aspiring amateur to little-known dabbler. Newspapers, magazines, books, online publications are all under the gun these days, with the purse-keepers pressuring editors and writers alike to squeeze out more lively, popular content using fewer resources. The gum-shoe reporter and the thoughtful columnist alike have been forever supplanted by the tireless young blogger with a strong angle on Lady Gaga's latest bean burrito-shaped hat ("An ingenious commentary on the speed with which every consumable bit of pop product is digested and expunged from our collective cultural bowels!").

Longtime professional writers are running scared, sniffing around for new ways to pay the bills without either bleeding the stone or rehashing press releases and wire stories in pace with a mob of monkeys with typewriters But we deserve punishment, don’t we? This is what keeps us in our exquisite bind, keeps us fractured and isolated from each other: Our suspicion that writing itself is a luxury, that no matter how hard we've tried to improve at our so-called craft, ultimately we're just spoiled, soft-pawed neurotics who would better serve society by digging ditches or flipping burgers or doing almost anything else besides basking in the illusion that our silly little derivative thoughts and ideas matter to anyone other than ourselves.

One of the most pathetic (and therefore also one of the most accurate) depictions of the writer's life ever to grace the small screen, "Bored to Death" quite appropriately presents writing as the choice of the wilty, self-involved narcissist, the sort of self-pitying loser who encounters impossible deadlines, ambivalent girlfriends, disrespectful editors and oppressive corporate publishing overlords with the same flavor of whiny disbelief. To the random hardworking surgeon or lawyer or business professional on the street, such a character might appear the epitome of ineffectual hipster solipsism. To the writer (or to the aspiring artist, or to the oppressed creative drone, yearning to breathe free), though, such a character seems downright heroic.

When Jonathan Ames (Jason Schwartzman), the young novelist at the center of "Bored to Death," sets about scratching his "three rules of writing" on a chalkboard at the start of the show's second season, we know it's going to be good.

"One, it's difficult," Jonathan tells the class. "Two, there will always be more rejection than acceptance. And three, try to give more pleasure with every sentence."

"But it's easy for you to say there will always be more rejection than acceptance," says a woman in the class. "You're a published writer, you've already made it."

"Well, actually, my second novel was just rejected," Jonathan counters cheerily. "I have to pay back my advance to my publisher." He turns to the chalkboard and underlines "Rejection," mumbling to himself, "It's pretty demoralizing."

Just when we feel a pang of sympathy for Jonathan -- or for George (Ted Danson), his editor, whose decades-old column at his magazine is abruptly cut by the board (his boss tries to encourage him not to be discouraged by telling him he's "great at cocktail parties") -- we also recognize what pampered, rarefied little children they are. Take the aspiring writer in Jonathan's class, who says she wants to write about "how hard and weird it is to be alive, even if your parents are middle-class and pretty loving," or the fact that Jonathan quite clearly feels bad that his students believe that writing is a worthy ambition. "I just think it's sad that all my students have this dream of writing a book," he tells George. "Did you tell them no one's reading anymore?" George replies. "Even I'm not reading. I got a Kindle but I dropped it in the tub."

And later, when Jonathan laments, "I have no skills for the world! At this point I might have to move back in with my parents," he echoes the gut feelings of a nation full of writers who wake up each morning, feeling like Dodo birds: irrelevant, slow and aging badly.

Without this acknowledgment of the self-pitying, maladaptive nature of the writer, without the near-constant whimpering and moaning of Ray (Zach Galifianakis), who portrays himself as a well-endowed hero in his comics but who plods through real life like a lost infant, we'd never get wrapped up in this farcical tale of writers on the verge of a nervous breakdown. The big kick of "Bored to Death" is the way the show lampoons the self-delusion of the man-child and self-proclaimed artist and long-revered professional writer alike, lumping them into the same silly, leaking boat together like three sad sailors who would rather puff more bong hits than bail out their vessel.

Likewise, the spirit of camaraderie among these overgrown boys, and the fragile friendships and bonds Jonathan forges with his clients, are part of the pleasure that the real Jonathan Ames and the other writers of this show bring to every page and every scene. The cop with an S/M fetish urges Jonathan to be discreet in his mission to erase an S/M dungeon's hard drive, and Jonathan complies respectfully, always going that extra mile to honor each of his clients as a human being, first and foremost, even if that requires running through the streets of New York padlocked into a leather bondage suit. Some mix of this compassion for humanity, this boyish mutual respect between the three main characters, and an admission of the absurd preciousness of the creative life makes "Bored to Death" a pure, sweet joy ride every week.

What's even more remarkable, though, is how the show has matured in only its second season. Far from an empty barrage of one-liners and absurd scenarios, "Bored to Death" offers one or two poignant scenes per episode, dramatic interludes that nonetheless feel organic with the larger, somewhat farcical mood. "You know, I was reading Joan Didion. She describes how her husband died just like that," George tells Jonathan after being diagnosed with Stage 2 prostate cancer. "It just seems so unfair that we can be turned off like a switch, like we never lived, like we never mattered. I don't want to be turned off."

No one wants that, of course. But the writer, with his delusions of grandeur, with his unyielding sense of entitlement and predisposition for misery, finds the specter of mortality particularly unjust. This is why we laugh at writers, in all of their patheticness and obvious weakness and self-importance. And this is also why we keep reading.