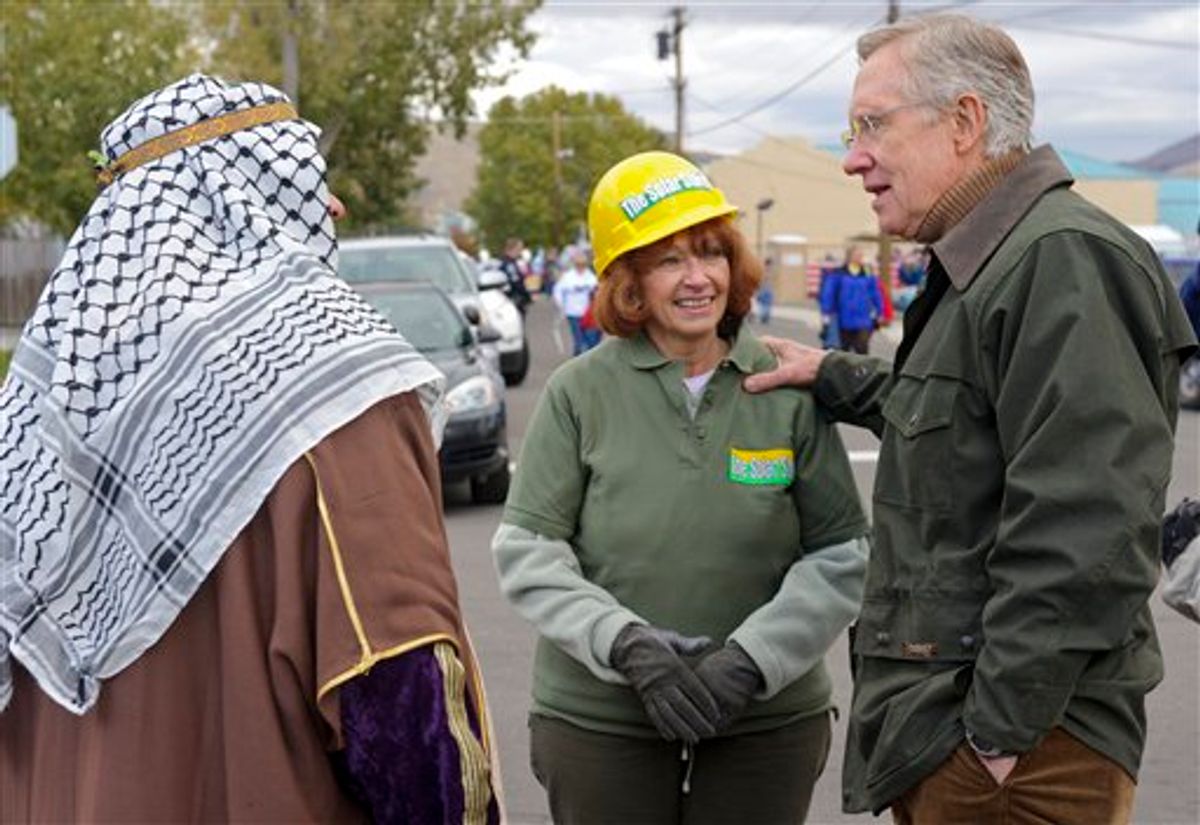 Jon Ralston, the Las Vegas Sun's chief political writer, has emerged as the national media's field-guide-in-chief for this year's Nevada Senate race. So the prediction he made on Sunday -- that Harry Reid will edge out Sharron Angle -- caused a national stir (at least among political-types).

Conceding that "the feverish animation of voters hot to oust Reid is unlike anything I have experienced in nearly 25 years of covering politics," Ralston concluded that Angle's own liabilities -- controversial past statements and inflammatory antics on the campaign trail -- would allow Reid to squeak by, 47 to 45 percent (with the rest going to minor party candidates and the "none of the above" option).

If he's right, it would pretty much guarantee that Democrats retain the Senate -- stealing Reid's Nevada seat has always been key to the GOP's takeover math -- and it would shut down the battle between Chuck Schumer and Dick Durbin to replace Reid that has become more prominent in recent days. It would also be an upset; every independent poll in the last week has put Angle ahead by four points.

Obviously, Ralston known Nevada politics a lot better than me and he's a lot closer to the ground. So maybe he sees something that's just not apparent to me. But I have a hard time buying his reasoning.

For instance, he cites Reid's narrow 1998 reelection victory, when he bested Republican John Ensign by just 428 votes, as proof that Reid is an unusual survivor. He shouldn't have won that year, but he did anyway -- so why can't he do it again in 2010?

But there are two key differences between 1998 and this year. One is that Reid fared slightly better in the final polls before the '98 election. The final Mason-Dixon poll then put him two points ahead of Ensign; but the latest Mason-Dixon numbers now have him four points behind Angle. Then there's the climate. Just like this year, a Democrat was in the White House in 1998, but the national tide, to the extent there was one, actually favored the Democrats -- the result of the GOP Congress' drive to impeach Bill Clinton. The tide this year is much stronger -- and clearly on the side of the GOP.

There's also the issue of Angle's baggage. Ralston is right that her perceived extremism and her polarizing campaign conduct have cost her; given the public's distaste for Reid, a generic Republican would be winning this race by 15-20 points. But there has been slight but clear movement in Angle's direction in the last few weeks. As negatively as most Nevadans view her, just enough of them seem to be reaching the point where they can rationalize checking her name off. I've previously likened this campaign to the 1994 Virginia contest between Charles Robb and Oliver North, a race with strikingly similar dynamics. In the final days of that campaign, North had fallen behind in most surveys; the gap was eight points in one of them -- the most North trailed by in any poll after winning the GOP nomination. In other words, the key swing voters seemed to be breaking away from him in the final days. (He ended up losing by three points.) Angle is playing the North role in Nevada, but that same decisive home-stretch movement away from her just doesn't seem to be taking place.

Ralston writes that he's stepping out on a limb with his prediction, and good for him for doing it.  I'll be the first to congratulate him if he's nailed this.