Ex-VP hopeful slams Politico for playing "immature, unprofessional, waste-of-time game" that she, too, has played 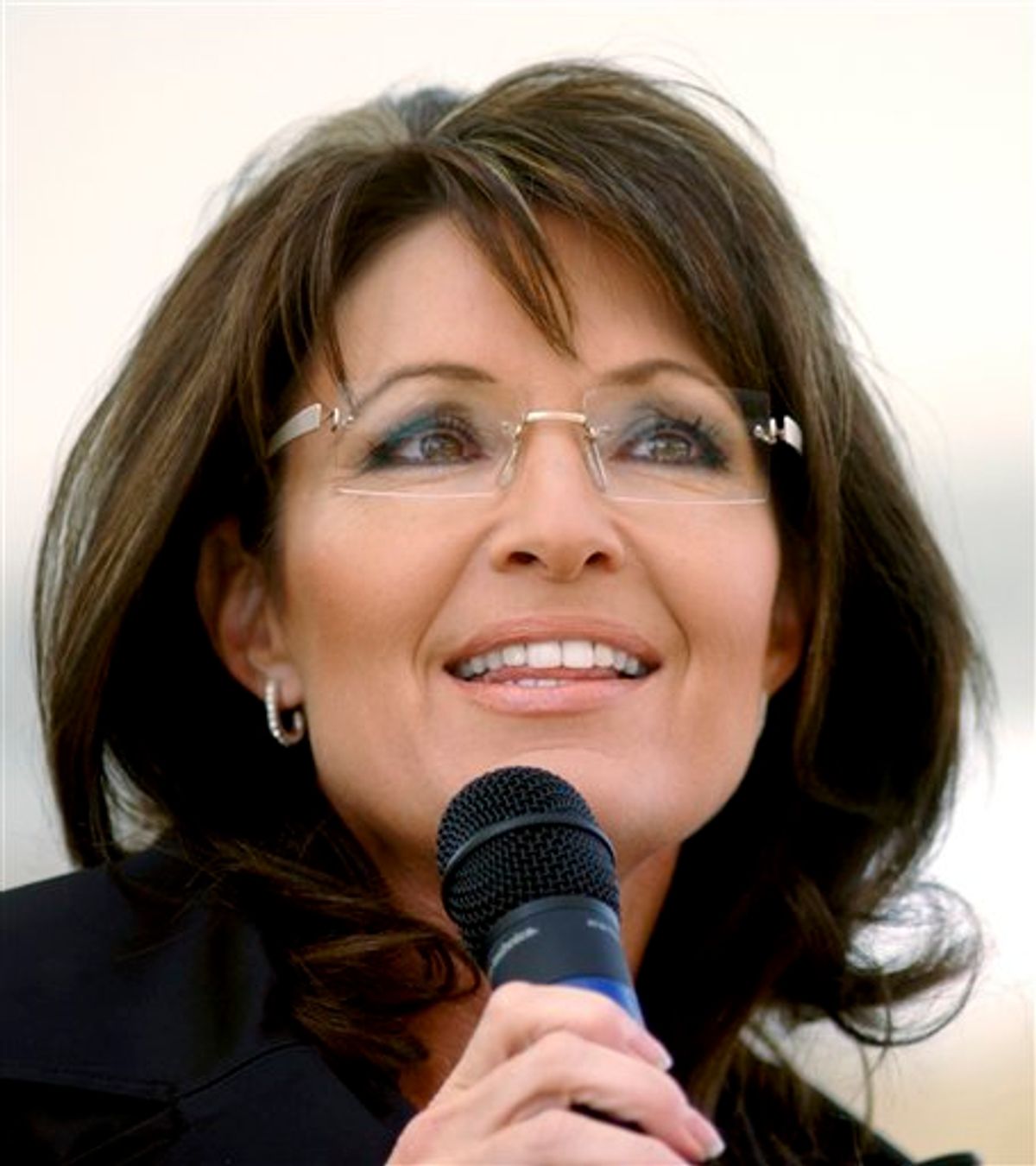 Sarah Palin today blasted Politico for a piece that cites unnamed Republican insiders who argue that Palin would be the wrong nominee for 2012:

“The ‘reporters’ who continue to cite ‘unnamed GOP-insiders’ as hard news sources are deemed impotent by the American public as we rise up and say, ‘The state of journalism today stinks. Let’s clean it up and expect some accountability’,” Palin wrote in an email to The Daily Caller.

Palin has a valid point here: Anonymously sourced attacks are often problematic, allowing sources to take shots at public figures without any of the risks associated with criticizing someone on the record, and without any disclosure of conflict of interest

The problem here, of course, is that Palin's own aides have not infrequently spoken to the press -- and, in particular, Politico -- on condition of anonymity.

Take this piece from July in which the Palin camp responded to some (also anonymous) criticism from Mitt Romney's people:

“For Washington consultants to sit around and personally disparage the governor anonymously to reporters is unfortunate and counterproductive and frankly immature,” said the [Palin] aide, who spoke on condition of anonymity.

Or this December 2008 item from National Review (via Nexis), in which an anonymous Palin aide criticizes the McCain campaign:

She was sequestered at her hotel during the convention and couldn't have gone out to buy clothes if she had wanted to. One Palin aide recalls going into her suite and seeing a seamstress clattering away on a sewing machine and people walking around with racks of clothes.

"She was under the impression she was supposed to do what the campaign told her to do," says the pro-Palin aide. "They brought in the clothes and told her, 'Money is no object.' She had serious concerns about wearing such expensive clothes. She was told, 'It's fine. It's fine.' Her mistake was she didn't stand up to the people around her."

While the people around Palin rarely talk to the press, when they do they regularly appear unnamed -- even on seemingly routine matters. From Politico in March:

Palin’s staff has twice told the RNC to remove her name from an invitation sent to donors, obtained by POLITICO on Wednesday, showing her as an “invited” speaker at the four-day fundraiser in New Orleans, timed to coincide with the SRLC event in Louisiana.

Palin, who will appear at the SRLC, “will not take part in any RNC fundraiser in New Orleans,” an aide said.

Or from Politico in May:

When asked about the composition of Palin’s targets, a Palin aide who asked not to be named said it wasn’t on purpose — it was simply a coincidence that so many women are in the crosshairs.

Or from the Los Angeles Times (via Nexis) in November 2008:

Palin's fierce defense was part of a broader push-back Friday by her loyal aides as she resumes her duties as governor and tries to repair some of the damage done in the rough-and-tumble of the campaign.

The aides -- who spoke on condition of anonymity while discussing the campaign's inner workings -- asserted that some members of Palin's traveling staff charged clothing for the nominee and her family on their personal credit cards and submitted reimbursement requests to the RNC.

Or, finally, from the Washington Times (via Nexis) in March 2010:

The bus tour that kicks off Saturday in Nevada will wind across the nation. By its end, organizers say, the tour will have drawn hundreds of thousands to its protests. Mrs. Palin, who is solidifying her ties to the group, plans to urge protesters to keep focused - and polite.

Governor Palin will again share her belief that debate must be civil and peaceful - and that the best place for Americans to express their frustration with Washington, D.C., and their commitment to our founding principles is at the ballot box this November, said a Palin aide who asked not to be named.