What issue is worth losing an election over? 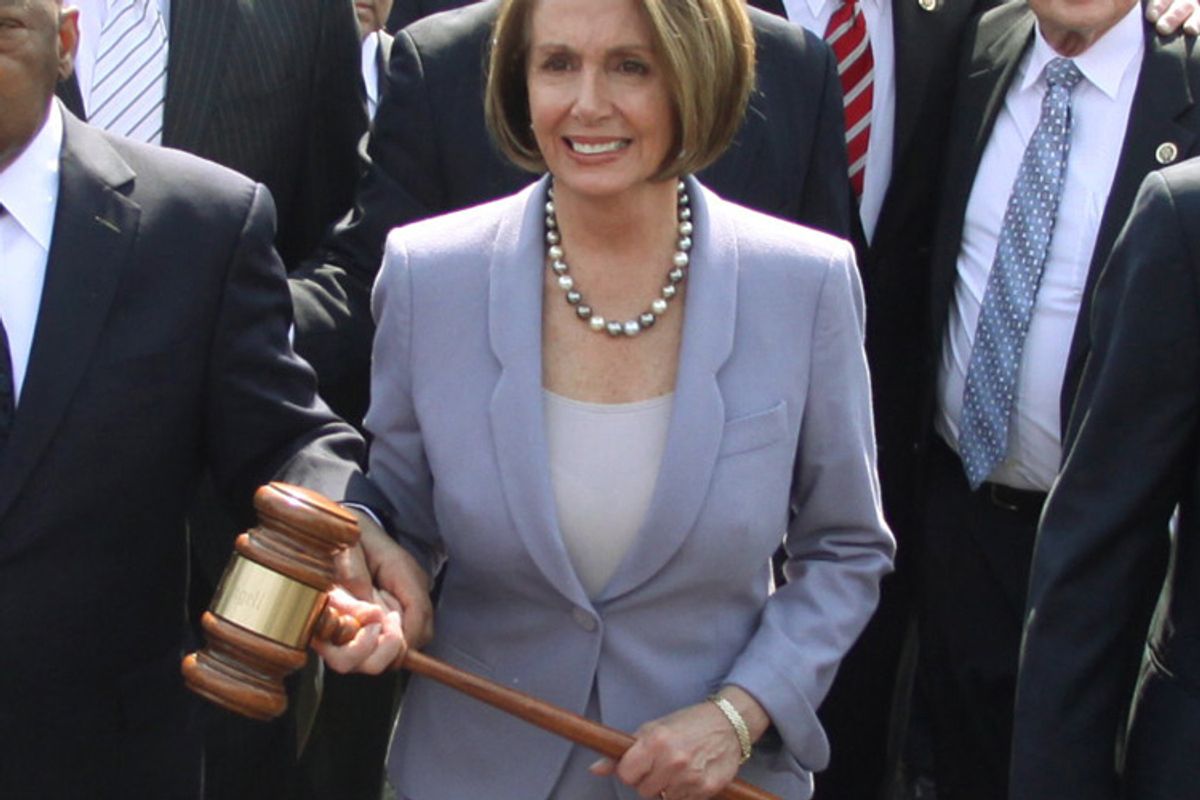 House Speaker Nancy Pelosi, D-Calif., on the way to the U.S. Capitol before Congress voted on health care reform legislation in March.
--

Here's something for election eve. We're about to put a new set of politicians in office, and we're going to hear a lot about two things: the party swing, and the oddball winners. They're both good stories, and should be covered. But we're going to hear a lot less about the overall quality of the newly elected pols, and why that even matters. So, as I join others in pointing to a new venture over at YouGov called Model Politics, in which political scientists run and then analyze interesting poll data, I'm going to talk about one piece in particular, to eventually get around to thinking about political skill.

The article I want to highlight, and then throw a bit of caution on, is from Larry Bartels, who interprets survey data on the expiring tax cuts. We've known for some time that the tax cuts for high-income taxpayers are unpopular. Bartels finds, however, that the minority who favor high-income tax cuts are far more intense than those who favor tax increases on the rich. Not only does that go a long way towards explaining why these tax cuts happen, but it also (in my view at least, and if we accept the survey results) makes them democratically justified; that is, in cases of an intense minority and an indifferent majority, there's a very strong case that the proper democratic outcome is for the minority position to be adopted.

Larry Bartels is one of the very last people I'd ever want to question, but I'm left with a lot of skepticism about the politics of this.

Some has to do with budgets and trade-offs. When it comes to the budget, there are limited moving pieces: taxes, spending, deficits. Presumably the best short-term move is always going to be to cut taxes and raise spending, on the assumption that people don't actually care about deficits, but mainstream Democrats may have good policy reasons for making responsible choices with the federal budget. Certainly, Democratic presidents since at least Carter have acted as if that's the case.

If the deficit is regarded as a fixed target, then the question is which moving piece will be less costly. Presumably, no matter how intense minority preferences may be, raising taxes on the wealthy isn't going to be worse politically than middle-class tax increases. No? And then there are spending cuts. How do the intense preferences for low taxes on the wealthy compare to preferences about slashing Social Security? Medicare? My guess, without looking at any numbers (and the YouGov poll doesn't appear to have asked about trade-offs) is that Democrats are better off antagonizing those who really hate tax increases on the rich. What about defense? That's a harder call, but there are both political (certainly) and policy (perhaps) risks in significant Pentagon cuts. So while it's nice for Dems to know the landscape, to know that intensity is with the tax cutters, it's not clear at all that Democrats should therefore believe that tax cuts are the politically safe choice, on that level.

That's where some of my skepticism comes from. The rest...well, I need to think about how this plays out.

First, I'll note that Republicans have decided that they're going to accuse incumbent Democrats of raising taxes no matter what they do, and voters who listen to GOP pols and yakkers are going to believe it. Thus the National Taxpayer's Union counted the stimulus (which, you'll recall, cut taxes), as a tax increase; thus most voters believe that Barack Obama and the Demcorats have raised taxes. So Democrats actually have a complex question. If they support and pass extension of the tax cuts, what's the size of the segment of the electorate that are even open to the possibility of Democrats being for lower taxes? How many of Bartel's intense opponents of high taxes for the rich will be affected at all by any actual policies that Democrats adopt?

To some extent, good survey evidence can help with that sort of question. But then it gets more complicated. Democratic politicians are balancing a lot of things when they make budget choices. In this case, it may include: raw majority preference (pushes one way); intensity (pushes another way); and commitments to constituency groups. That last one matters! Bartels concludes:

Of course, the president and his allies in Congress could still push to implement the proposal in a lame duck session. If they do, it will be a principled choice rather than a politically expedient one. For expedient politicians, an energized minority trumps a tepid majority every time.

Perhaps. But Obama would clearly be breaking a promise if he flipped on this one. How would his strongest supporters react? How would party elites react? Would it harm his reputation? Shake his connection with them? Even if tax cuts on the rich don't poll as something that Democrats at the mass level care a lot about (now), it's certainly possible that flipping on it would provoke strong reactions from Democratic opinion leaders, which then would spark the intensity of opinion missing now.

More layers: presumably, on at least some issues, politicians take the positions they do because they're convinced that the policies they choose to support will actually work. If that's the case, then they may have a reasonable belief that immediate public opinion, even if measured and understood correctly, may prove ephemeral. After all, if a group of citizens wants tax cuts for the wealthy because they believe it will produce economic growth (and not just because they like low taxes for rich folks), and elected Democrats believe that in fact such tax cuts will not produce economic growth, then they might think the correct political play is to take the public opinion hit now, on the assumption it will pay off in the medium or long run.

That's just taxes, but it's going on with every issue, all the time. It informs the debate that continues to go on about the effects of passing health care reform on the 2010 election cycle. We will, eventually, get good estimates after the fact of the effects of support for ACA on House vote, to update the early estimates from Seth Masket. But those are always going to be static effects that assume one context, and we can imagine many other contexts (such as Jonathan Cohn's parallel universe).

What I mean to emphasize in all of this is just how complex are the choices faced by politicians, especially presidents, even if all they care about is re-election, and even if they get good polling. They are the ones who must choose: how important are my commitments on this issue? What is the likely effect of breaking those commitments? How will policy implementation change the political universe? How will retreat change the political universe? How confident am I in the policy forecasts? What kinds of uncertainty are in all of these equations, and how should one deal with that uncertainty (what kinds of downsides are absolutely crucial to avoid risking)?

Think about health care reform again. As I've argued in the past, it's very possible that ACA when fully implemented will rapidly become an untouchable sacred cow -- and still not help Democrats at all (among other things, the more successful it is the more it removes health care as a high-salience issue that plays well for Democrats). At least, I think that's the logic of it... the problem for pols is that they need to get a sense from one sense of specialists how the legislation will work, and also have a sense of how it will be attacked and what future votes might have to be taken, and also have a sense of how all of this will play with swing voters, with strong supporters, with relevant interest groups.

And then there's the point that Matt Yglesias makes, that "the point of winning elections is to pass laws." Good point, but that leaves (as he implicitly points out) the question of which laws are worth losing. I'd agree with those who argue that (sort of) universal health care, a primary goal for the Democratic Party for half a century, is worth losing an election over... but even there, one has to be careful, since losing an election could wind up getting things repealed or undermined, and then you're back at square one, or even worse. And that's an easy call! What about the upper-income tax cuts? Is that worth losing an election over? What about financial regulation? Does the answer to that change if you think the bill that was available was only 20% of what was needed? 40%? 10%?

The people with the skills needed to answer these questions are professional politicians. If they're good -- the Bill Clintons, the Ronald Reagans, the Nancy Pelosis, the Bob Doles -- they'll learn when to trust their policy experts, and when not to. They know which coalition bonds are strong, which are weak; which commitments must be honored, and which can be ignored, and how to keep relationships strong when a commitment can't (or won't) be respected. They know when to listen to their pollsters, but they also remember the time that the Iowa Caucus was a few months away and the pollsters could find no hope, but they strung together the coalition that was just barely enough to go on to the next round, and they'll know that even the best polling only shows what people think right now. Without, of course, falling into the trap of assuming that they always know more than the pollsters, the policy people, and their political advisors.

They'll know how to balance "win to pass laws" with knowing when to live to fight another day. They'll see the opposition arguments coming, and have a sense of when to move to counter those arguments, and when it's best to just bull ahead because those arguments are coming whatever happens. They'll have a sense of timing. They'll know, or at least be aware of, the differences between what plays in Washington and what plays back home, and they'll realize that both are important.

And this is where Jim Manzi really gets it wrong when he writes about expertise, politicians, and the Progressives. He's right that the Progressives wanted experts to run things. But that didn't mean politicians, to them; it meant neutral expertise, the kind that one can test for in civil service examinations. That's what Manzi is against, too, I think, but he conflates those sort of experts with politicians. Pols are not Buckley's much-maligned Harvard faculty, but they're not the first 2000 names in the Boston phone directory, either.

They are experts, but not in public policy -- or, if the latter, only incidentally. Their expertise, if they have it, is in representation. That requires a politician to deal with the sorts of questions and have the sorts of skills I described above: not what a particular piece of legislation will do, but how to reconcile what the experts say it will do with what her constituents and constituencies want, or say they want, or will want in the future, or how they want her to behave in office. Who she's promised to be.

And for that, neither the policy experts Manzi doesn't like nor the markets he does like -- and certainly no poll, no matter how sophisticated -- can give safely correct answers. For that, we need those who are skilled in the art of politics and the tending of representational relationships. We need politicians.