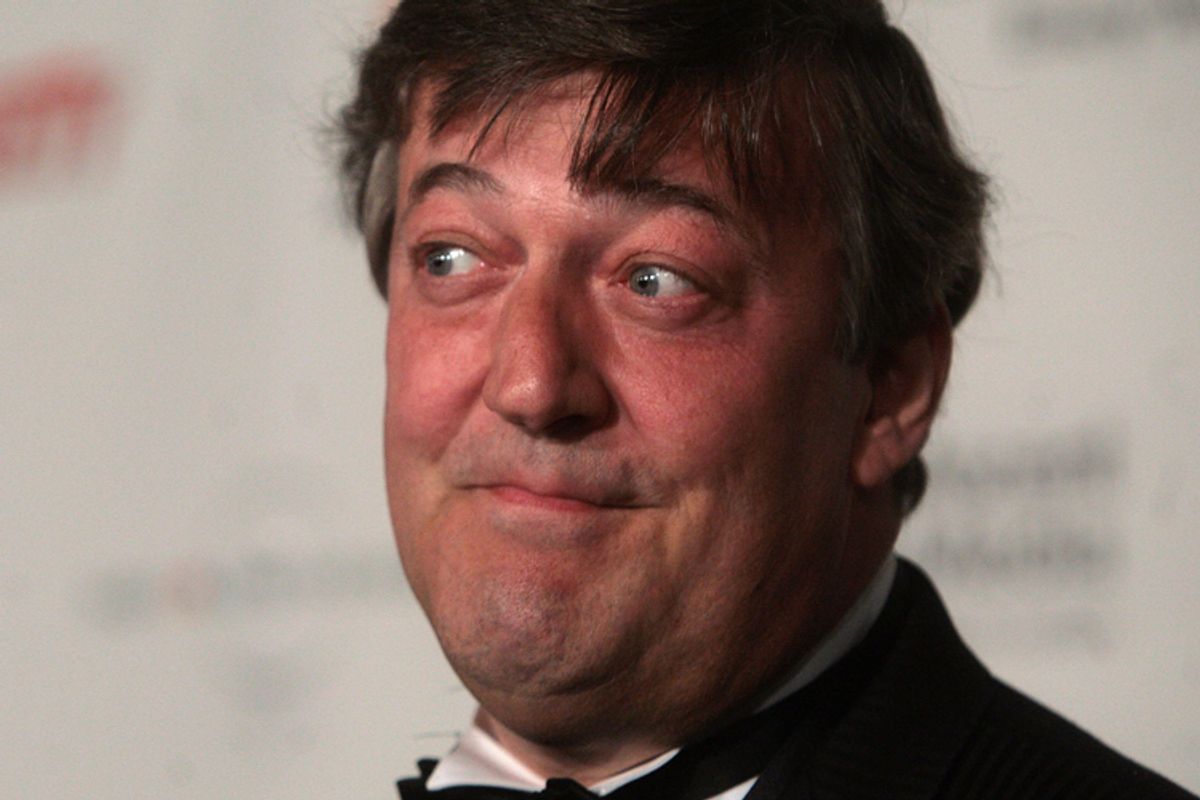 Women don't like sex as much as men. So declared Stephen Fry in a recent interview with Attitude magazine, thus inciting a backlash of epic proportions. The Observer got word of the British actor's explosive comments and reported on the interview, giving it a wider audience. Then the U.K.'s famous feminists, like Germaine Greer, came out to publicly denounce him. Now, Fry, an openly gay man, is claiming that it's one big misunderstanding: "So some fucking paper misquotes a humorous interview I gave, which itself misquoted me, and now I'm the antichrist. I give up," he tweeted yesterday. He followed up with a more succinct message: "Bye Bye." Both the Observer and Attitude (the magazine, not Fry) stand by the comments, which read:

If women liked sex as much as men, there would be straight cruising areas in the way there are gay cruising areas. Women would go and hang around in churchyards thinking: 'God, I've got to get my fucking rocks off', or they'd go to Hampstead Heath and meet strangers to shag behind a bush. It doesn't happen. Why? Because the only women you can have sex with like that wish to be paid for it.

He went on to say:

I feel sorry for straight men. The only reason women will have sex with them is that sex is the price they are willing to pay for a relationship with a man, which is what they want. Of course, a lot of women will deny this and say, 'Oh no, but I love sex, I love it!' But do they go around having it the way that gay men do?

Maybe Fry, a comedian, was just joking around. Maybe he was misquoted. Maybe it was some combination of the two. Regardless, these comments are worthy of debate, because they reflect a familiar cultural attitude: That men like sex more than women, and that women use sex to get what they want.

I could defensively argue that, wait, some women do like casual sex as much as men! That is certainly true, but it misses the point entirely. The real problem with Fry's comments is that he appears to qualify a person's interest in sex in terms of their interest in shtupping strangers. Per the usual, sex is defined in men's (supposed) terms: Real sex, sexy sex, is sex of the uncommitted wham-bam variety. Sex within committed relationships is written off. Truly liking sex means liking it with strangers, because emotion and intimacy dilute sexual pleasure -- or something.

Using this logic, you might as well say that most straight men don't really like sex because they don't go to gay cruising areas for no-strings hookups. If they really liked sex they would get off any way they could, right? He doesn't argue that, though, because disliking certain kinds of sex is different from disliking sex. We all have sexual preferences, as I'm sure Fry will readily admit. What he seems less inclined to acknowledge is that women's carnal proclivities are also valid. That is sadly ironic coming from a gay man, given how often homosexuality is pathologized.