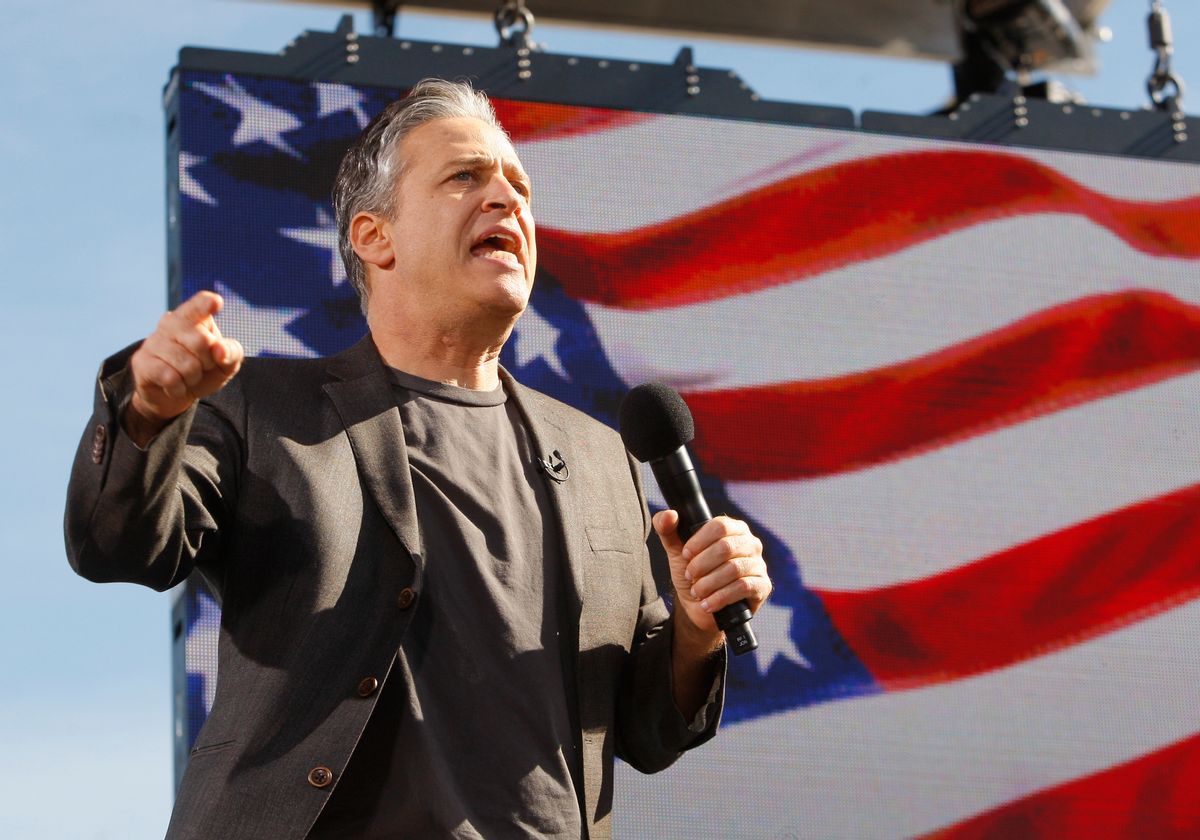 Comedian Jon Stewart addresses the crowd during the "Rally to Restore Sanity and/or Fear" in Washington, October 30, 2010. The rally is a counterpoint to recent partisan political rallies on both ends of the U.S. political spectrum held in anticipation of the November 2nd Congressional midterm elections. REUTERS/Jim Bourg (UNITED STATES - Tags: POLITICS ENTERTAINMENT) (Reuters)
--

Was Jon Stewart's media critique at this weekend's "Rally to Restore Sanity" a searing indictment of a broken institution? Did his desire to be "fair" make his sermon into an inaccurate "pox on both houses" attack on both shameless propagandists and passionate liberals? Does the media actually not matter that much? Judging by the reaction of media people, the answer to all of those questions is "yes."

It's worth noting, first of all, that the soul-deadening cynicism of your average political reporter makes them appreciate Jon Stewart's comedy but find his earnestness alien and stupid. That's your explanation for half the media response right there. But Stewart annoyed some sincere partisans as much as the hacks.

While the rally was still happening, MSNBC's Keith Olbermann was criticizing the message on Twitter. Olbermann took Stewart to be arguing that liberals (the ones who watch Stewart) should calm down and stop shouting, which would be a preemptive surrender to still-shouting Republicans.

The New York Times' David Carr said that the badness of the media is largely irrelevant (an amusingly counterintuitive -- or maybe just realist -- take from a Timesman).

But here’s the problem: Most Americans don’t watch or pay attention to cable television. In even a good news night, about five million people take a seat on the cable wars, which is less than 2 percent of all Americans. People are scared of what they see in their pay envelopes and neighborhoods, not because of what Keith Olbermann said last night or how Bill O’Reilly came back at him.

"If we amplify everything, we hear nothing," Mr. Stewart said, and then went on to say, "not being able to distinguish between real racists and Tea Partiers or real bigots and Juan Williams and Rick Sanchez is an insult, not only to those people but to the racists themselves who have put in the exhausting effort it takes to hate," he said.

All due respect to Mr. Williams and Mr. Sanchez, not many people know or care who they are.

All of this is fair enough -- the number of people who care about the latest outrage du jour from the left or the right is actually absurdly small -- but it also lets the media off the hook for their occasional acts of egregious malfeasance. As Hamilton Nolan notes, the media's problem is less "disagreement" than bubble-ensconced groupthink. I mean, "no one" watches the Sunday shows, but the Sunday shows got us into Iraq. (Civilly and politely, for the most part.)

And how do Americans "learn" that Kenyan-born Barack Obama has already raised all of our taxes? They half-hear something on the news about it, or a friend -- who heard it on the radio -- tells them, or whatever. The media is how people learn about the nation, even if it's passively and without paying much attention, so a media that doesn't police lying and misinformation -- and a media that constantly fear-mongers or that presents every single issue as an intractable argument between two immovable forces -- certainly does hurt us all.

Talk radio and bad cable news can also have a radicalizing effect on their audiences, turning regular Republicans into raging ultra-conservatives in a way that Fox's liberal analogues (that means the New York Times and NPR, not really MSNBC) do not. And anyone who watches Fox all day and takes it seriously is being fed a steady stream of bonkers conspiracy theories and outright misinformation. (Except when Shep is on.)

So Jon Stewart's stated goals -- civility and niceness! -- did sorta force him to let the real offenders off the hook. His critique of propaganda got wrapped up in a different attack on a nonpartisan press that "reports" on media-created stories and rewards horrible behavior with attention. And the producers of the rally went really heavy on MSNBC's liberal programming in their montages of media misbehavior -- probably in part because they're more sympathetic to the politics, and so they find the occasional lapses into hysteria more grating.

(Though some of it was just because they needed to find examples of "both sides" doing it. Bringing a gun to a right-wing political rally is obviously much, much nuttier than calling that person a gun nut -- as our Joan Walsh was shown doing in a rally montage cameo.)

But anyone attempting to attract a partisan audience -- Fox or Rush or MSNBC or liberal blogs or Paul Krugman -- scaremongers. They do it for the same reason local news teases something in your medicine cabinet that could kill your child: It gets people watching and keeps them from turning the channel. (And, to be fair, scaremongers often think they're just responsibly warning people about a very real threat, whether that threat is Islamic terror, trans fats or Sharron Angle.)

So yeah, Stewart's speech wasn't a fair reflection of the media landscape. Jon Stewart's job involves watching cable news all day, every day. Anyone who does that comes away with a pretty bent view of the national mood.