The unbearable stupidity of American voters

Obama lowered taxes, and the economy is (slowly) growing. But that's not what the people believe. Why? 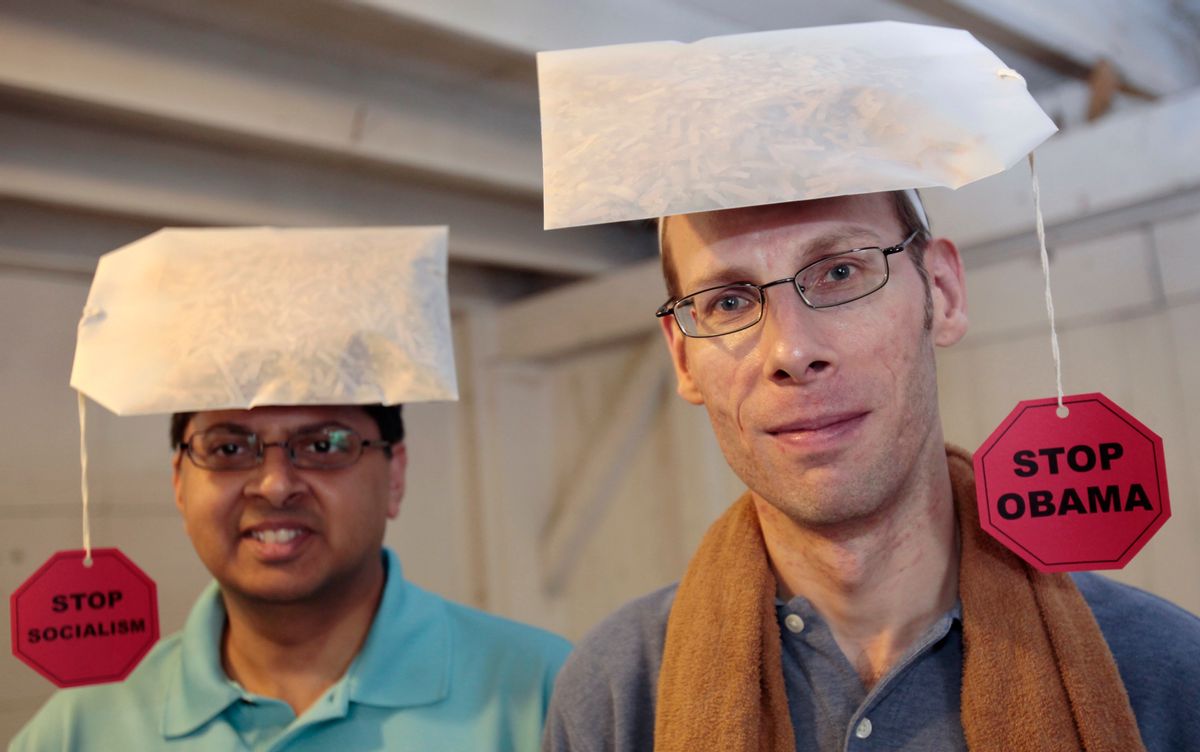 Gary (R) and Samuel (L) wear 'Stop Obama, Stop Socialism' tea bag hats they are selling at a Tea Party Political Fair in Charlotte, Michigan July 24, 2010. The midterms are still two months away, but already a lot of Tea Partiers are looking beyond the elections and working out where to go from here. Picture taken Photo taken July 24, 2010. To match SPECIAL REPORT USA-ELECTIONS/TEAPARTY REUTERS/Rebecca Cook (UNITED STATES - Tags: POLITICS) (Reuters)
--

For those of us in the media business, which, supposedly, at least some of the time, implies a mission of informing readers about what's actually happening in the world, the results of a a poll conducted by Bloomberg last week are incredibly depressing.

By 52 percent to 19 percent, likely voters say federal income taxes have gone up for the middle class in the past two years.

Except, that's just not true.

The Obama administration has cut taxes -- largely for the middle class -- by $240 billion since taking office on Jan. 20, 2009. A program aimed at families earning less than $150,000 that was contained in the stimulus package lowered the burden for 95 percent of working Americans by $116 billion, or about $400 per year for individuals and $800 for married couples. Other measures include breaks for college education, moderate- income families and the unemployed and incentives to promote renewable energy.

Even a plurality of Democrats believe Obama has raised taxes. Poll respondents also think the U.S. economy is continuing to shrink, when in fact it has grown for the last five quarters.

The incumbent majority political party usually is fighting an uphill battle in a midterm election, but when you throw in headwinds of ignorance on this scale, it's easy to despair. It's one thing to argue that Obama probably shouldn't have included a big tax break as part of the stimulus, instead of pouring more money directly at infrastructure spending and aid to states. But when he cuts taxes and everyone assumes that their tax burden rose, the strategy is doubly undercut.

There are two takeaways:

No one cares about statistics indicating that gross domestic product rose at 2 or 3 or 4 percent in a quarter. The unemployment rate is by far the most important economic indicator. If you've lost your job, can't find a job, or are in fear of losing your job, you are unlikely to believe that the economy is growing. The Obama administration made a bet that a $787 billion stimulus bill would bring the unemployment rate down to a politically reasonable point by the midterm election. It did not, and Democrats will be punished for it.

2) Republicans have won the messaging game for the last two years.

It seems remarkable that a party that governed so badly while it was in power, preaching smaller government while engaging in total fiscal irresponsibility, would be trusted by anyone on anything. But GOP talking points, fueled by Tea Party mobilization, appear to have taken hold almost immediately after Obama's election. Even as Obama was lowering taxes, he was labeled with the hoariest of Republican attack-mantras: tax-and-spend. He was immediately blamed for a budget deficit that was largely constructed by Republicans and the result of recession-induced shortfalls in tax revenue. He is now saddled with responsibility for an unemployment rate that is the consequence of a crisis that occurred before he took power, and that would undoubtedly be higher if not for the stimulus.

But that's all for naught. Whether the Obama administration could have dented the misinformation by more aggressively making the case for its own actions is something we'll never know. High unemployment is a very difficult jam to talk your way out of. We knew that. What we didn't know is that high unemployment can actually twist perceptions of objective reality into an alternative universe. Obama lowered your taxes. It might not have been the smartest thing to do, but it's what actually happened!