The unbelievable intelligence of American voters

Here's the explanation for why people think their taxes are rising. Because in the long run, they must go up 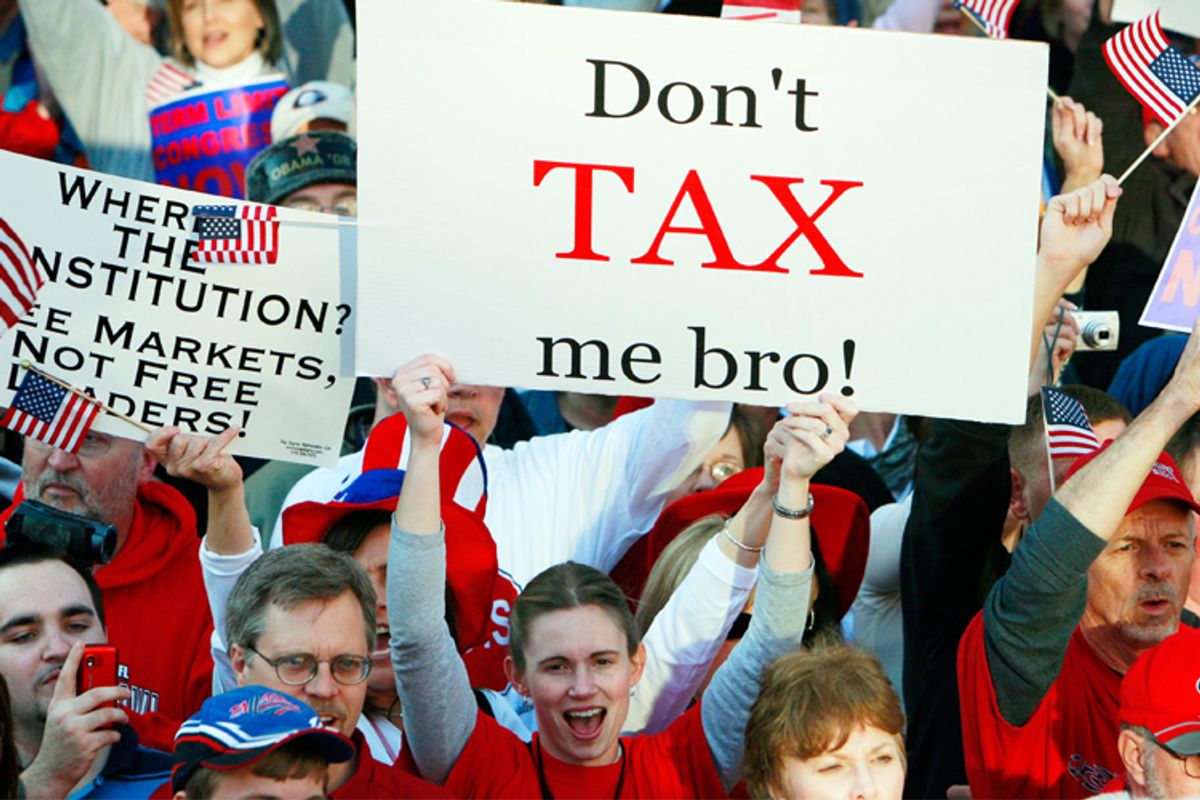 My post on stupid American voters kicked up quite a fuss today, a happy combination of readers delighted to have their worst suspicions confirmed and readers outraged and disgusted by my elitist condemnation of the hoi polloi. A colleague of mine even suggested the headline was likely to get a mention oby Rush Limbaugh today. Whether that would be a badge of honor or mark of shame, I do not know.

What does interest me however, is a theory brought up by readers in both the comments and in personal e-mails that declares that what's really happening here is that since Americans know that their taxes ultimately must rise in the future, given the vast, unhappy disparity between government revenues and outlays, they feel as if their taxes have already risen, even if they haven't.

I don't disagree with the presumption that taxes will rise in the future. The percentage of income that Americans currently pay as federal income tax is lower than at any point since the 1950s -- it has declined steadily, through Republican and Democratic administrations, since the early 1980s. The inability of either Republicans or Democrats to significantly cut government spending implies that taxes must rise, or, eventually, the United States will have a hard time borrowing enough money to pay the rent.

But if this prudent foresight explains why Americans currently think their taxes are rising, then, why, I wonder, didn't they have the same epiphany during the Bush administration? When you cut taxes, start wars, and increase health care spending (the Medicare Part D prescription plan) without accompanying those actions with corresponding spending cuts, you guarantee future tax hikes. We've been headed down this road for years, but only now, when the federal tax burden has hit a historically low point, are Americans convinced that their taxes are rising.

The quick answer to that is that the budget deficit numbers are much scarier now than they were a few years ago. But as Justin Fox recently pointed out, almost half of the current budget deficit can be blamed on the huge shortfall of government revenue due to the recession. If Obama's first action as president had been confined to simply tax cuts -- the deficit would still have rocketed up. And if he had attempted to significantly cut the size of government to match those cuts, unemployment would likely be much worse now than it already is, as hundreds of thousands of government workers would have joined the layoff rolls, and, not uncoincidentally, further put pressure on government finances by seeking unemployment benefits.

It is not dumb to worry about the future, that's for sure. But it would have been smarter to start down that road a decade ago.