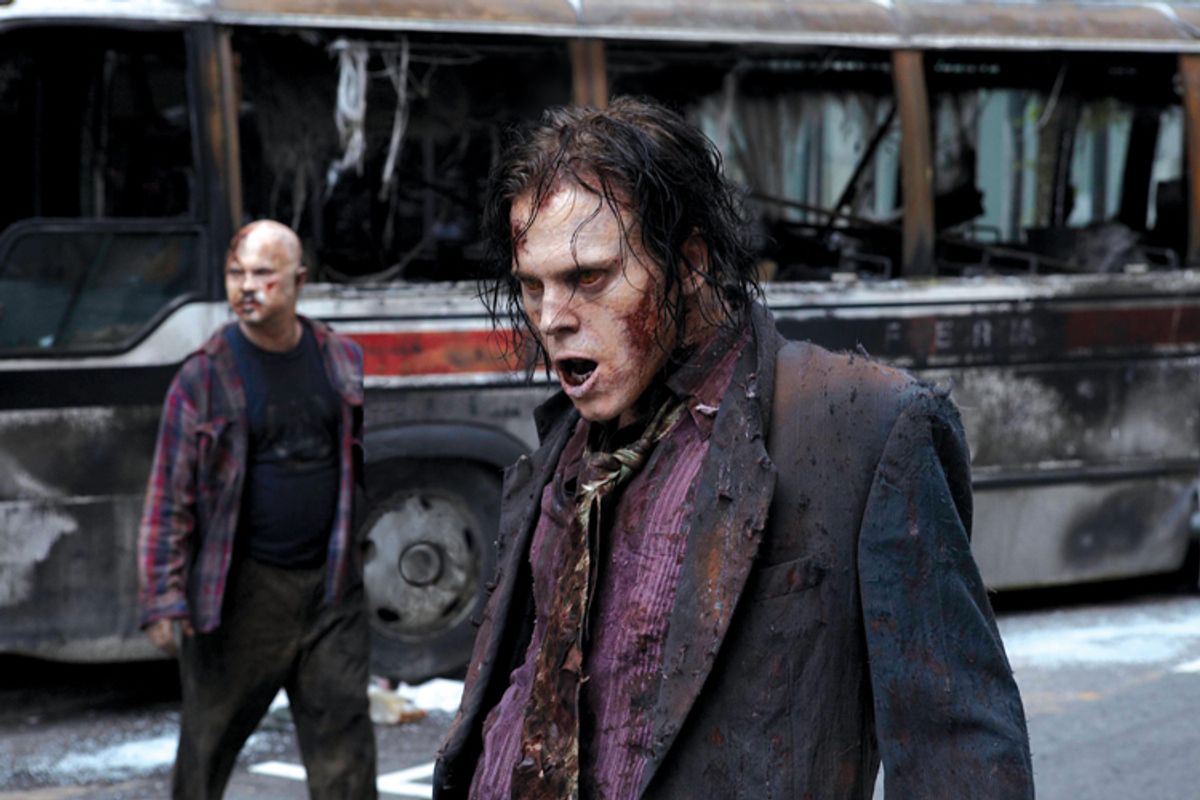 A still from "The Walking Dead"
--

Zombie films are never really about zombies; they're disaster films about how people behave when society is collapsing and there's no government looking over their shoulders. As an aficionado of the genre -- which I've written about in a Salon slide show and summed up in a video essay -- I was intrigued to find out if AMC, filmmaker Frank Darabont ("The Shawshank Redemption") and producer Gale Anne Hurd ("Terminator") could add anything new to the blood, guts and ethical quandaries formula while adapting Robert Kirkman and illustrator Tony Moore's comic book series "The Walking Dead" (which debuted last night). Ghoul-crazy storylines are by nature mythic (albeit in a goofy way), and as such, they tend to be fun, at times sensationally effective, in concentrated, feature-length bursts. Beyond that, you run into the problem of repetition. When the energy level is cranked up into the red zone (no pun intended), the way most recent zombie films like it, over time the shocks are almost guaranteed to become less shocking, the dark comedy less amusing, the emotions less affecting. The too-muchness hard-wired into the genre might become too much.

Can "The Walking Dead" beat the odds? Based on last night's pilot and next week's episode (which AMC provided in advance for critics), I'd answer with a qualified yes, thanks mainly to the naturalistic way the series foregrounds the notion that the zombie film is a popcorn Gothic variation on the "End of the World as We Know It" story. From "Earthquake" and "Deep Impact" to "War of the Worlds" and Cormac McCarthy's apocalyptic parable "The Road" (the film version of which appears to have influenced Darabont), these stories all ask similar questions: When most of what you knew and loved is gone, is there any advantage in being kind -- or any difference between rational self-interest and flat-out selfishness? In a post-catastrophe landscape, utilitarianism becomes the go-to philosophical framework for every debate. "If my survival caused another to perish, then death would be sweeter and more beloved," wrote Khalil Gibran, a noble sentiment if you're not angling for the last seat on the last plane out of Zombieville.

This is certainly the best of times for zombie films generally, and for this series in particular. With the economy still mired in a four-year slump, social services deteriorating, and the country locked in what amounts to a seemingly permanent and thus far largely bloodless civil war, ever-larger numbers of Americans are grappling with basic questions of survival, making priority lists of which creditors to pay and which to string along, encouraging unemployed friends and sick relatives to find someplace else to crash, and thinking of skirting or breaking laws they would have honored in less dire times. The moral dilemmas presented in zombie movies are more outrageously colorful, and much more exciting, but similar in spirit. The slow pace and meticulous dramatics of "The Walking Dead" infuse the mundane into the fantastic, and connect what happens on-screen with what's happening in post-employment America. It's a kitchen-sink drama; the sink is full of bloody bats, hammers and hacksaws.

The ethics-debating-to-flesh-ripping ratio is probably higher here than in any zombie film that inspired "The Walking Dead," including the granddaddy of the modern zombie picture, George Romero's "Night of the Living Dead" (1968). Anybody that tuned in expecting kinetic action along the lines of "28 Days Later" or the 2004 remake of Romero's "Dawn of the Dead" -- wherein the monsters sprinted like Olympic track-and-field stars -- was likely disappointed. By my stopwatch, at least two-thirds of the extended pilot, titled "Days Gone By," was zombie-free, concentrating on the plight of former small-town Kentucky cop Rick Grimes (Andrew Lincoln). This Gary Cooper-esque, strong-silent hero (like so many cable TV actors, a Brit doing a generic "regional" accent) was rendered comatose after a high-speed chase and shootout -- one that provided the premiere's only wholly gratuitous burst of mayhem. He woke up, rather like the hero of "28 Days," in a hospital after the pandemic had begun, released himself on his own recognizance, surveyed the extent of the disaster, then swore to locate his wife, Lori (Sarah Wayne Callies), and his son Carl (Chandler Riggs), who had apparently fled their house in a hurry (and in one piece).

And that's when the premiere of "The Walking Dead" started to hit its preferred stride: a laid-back shamble not unlike that of Romero's black-and-white founding fiends. The opening episode took Rick out of the countryside and into the suburbs and then onto a major city (Atlanta, although the series seems inclined to go for an Anytown, USA sense of place) letting scenes play out as long as the filmmakers thought necessary. In Darabont's case, that can be quite a while; luckily the pacing here struck me as nearly always just about right, with the exception of the ghastly zombie-girl prologue (a glorified tease that also made Rick's post-awakening incredulity a bit weird; what, he didn't remember shooting the rotting-faced girl? What was that sequence supposed to be, anyway, seeing as how it doesn't quite fit with the rest of the episode's chronology?) and the aforementioned "Dukes of Hazzard"-with-blood-squibs sequence. Both could have been trimmed or deleted without damaging the episode.

Elsewhere, Darabont and company were on surprisingly solid ground. The peak for me was the long section in the middle in which Rick takes refuge with a surviving father and son, Morgan (Lenny Moore) and Duane (Adrian Kali Turner). They hole up in their house while zombies shuffle around on the street outside, occasionally driven into a pathetic flurry of motion by gunshots or car alarms. The mortals draw the blinds to prevent the undead from detecting movement and talk softly, their voices always teetering on the edge of fright. "I never should have fired that gun today," Morgan tells Rick, referring to the shot he fired earlier that knocked out a flesh-eater and saved the former cop's life. "The sound draws 'em. Now they're all over the street." Duane knows how to shoot, just like Mel Gibson's boys in "The Patriot." When the streets are overrun with rotting monstrosities -- including a corpse that was once Morgan's wife and Duane's mama -- the kumbaya thing doesn't cut it.

"She died in the other room on that bed," Morgan says of his formerly warm-blooded wife. "I should have put her down. I just didn't have it in me. She's the mother of my child." The scene of Morgan staring through his rifle scope, trying to muster the gumption to pull the trigger and perform a mercy killing, brought the episode to a peak of emotion that the remainder couldn't match. After that, the lone cowboy vs. zombie injuns action in the city couldn't help but feel routine (even though Darabont's elegantly clean sense of screen space made it a grim pleasure to watch). Ditto the intimations of "But I thought you were dead!" partner-switching on the part of Lori, who's hiding out in the countryside with Rick's former partner, Shane (John Bernthal); that business felt too daytime soap on first glance.

Luckily episode two, which I'll avoid discussing in detail here, fills the picture in with more nuance than you might expect -- particularly in its delineation of Shane's "every man for himself" philosophy, a far cry from Rick's matter-of-fact decency. (I'm skeptical of this, too, though; making Shane less likable than Rick is too easy, and sets Shane up to be eaten with a clear conscience.) Next Sunday's installment also clears up a mystery created by a clumsy bit of climactic offscreen dialogue near the end -- I'm not spoiling anything by telling you that the voice that crackles over the radio of the tank that Rick has crawled into does not belong to a zombie, and that where there's a downtown, there are retail stores, and where there are retail stores and zombies, there are allusions to "Dawn of the Dead," complete with bloody hands paddling plate glass. (Here endeth the not-quite-spoilers.)

The premiere's second most engrossing thread -- for me, at least -- was Rick's interaction with that mangled, paraplegic, crawling zombie woman. His decision to seek her out and put her out of her misery (at least that seemed to be his thinking, based on what we've seen of Rick) was noble, to be sure -- a mercy killing. (In addition to the "Lord of the Flies" aspect, zombie films are also coded arguments in favor of euthanasia, treating death as a gift bestowed on those who are alive but no longer truly living.) But it also hinted at tendencies that Rick will have to suppress, perhaps lose altogether, if he's going to survive long-term. On the plus side, he did for that wretched former mortal what he probably wishes somebody would do for him in the same circumstance. But on the minus side, he wasted a perfectly good bullet that might have come in handy later. In the end, which scenario is preferable? Keep your pulse but lose your soul, or vice versa? There doesn't seem to be much middle ground.

"DON'T OPEN," read a sign on a barricaded double-door back at the hospital. "DEAD INSIDE." That statement does double-duty as a truth-in-advertising proclamation and as an allusion to the series' real agenda. As the pandemic goes on, things will only get worse, and people will only act worse, and eventually it'll get to the point where there won't be any discernible difference between zombies and non-zombies other than the temperature of their bodies and their preference in nourishment (and maybe not even that). "DEAD INSIDE" is what Rick and his family and any other survivors will be, and "DON'T OPEN" will be the watchword for protecting what's left of your feelings, the imperative to look out for No. 1 and not get too attached to anything or anybody for fear of being exploited, manipulated, robbed or killed. "Walking Dead," indeed.