The American people "are starving for explanations," he tells Salon during one final five-state push 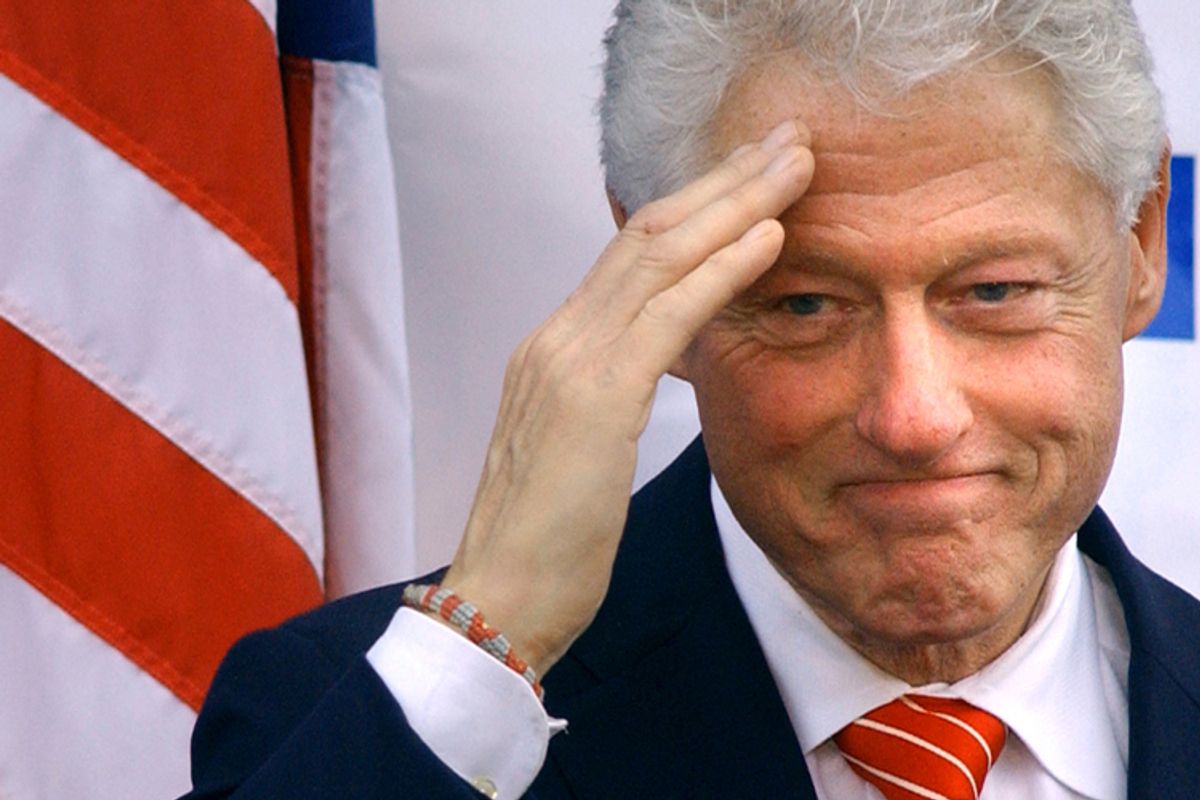 Bill Clinton returns a salute to the crowd as he stumps for Governor Joe Manchin in Beckley, W.Va., on Monday. Manchin is running against John Raese for the vacant seat of the late Sen. Robert Byrd.
--

As Bill Clinton began the last day of the midterm campaign on a chilly morning in Saratoga Springs, not far from New York's border with Canada, he confided jokingly that he had originally expected only "to do a few events this year to honor the people who had supported us," noting that his wife, as secretary of state, is prohibited by law and custom from partisan politicking.

"This is my 127th event," he recalled as the crowd of 1500 upstate Democrats laughed appreciatively. "And I’ve kept going because I am so concerned that in the fact-free environment of this election, people are going to choose exactly what they don’t want." That concern spurred him on a grueling, 18-hour series of jet hops from two stops in the northern reaches of his adopted state on to McKeesport, Pennsylvania, then Beckley, West Virginia, Louisville, Kentucky, and finally Orlando, Florida for a late-night rally.

The former president always draws enthusiastic crowds, and they listened raptly to his latest political pitch, which included point by point explanations of the student loan reform, healthcare reform and the banking bill to his argument that he and his fellow Democrats -- not the Republicans -- deserve the affections of the Tea Party.

Repeatedly, he complained about the "cowardice" of the "Anonymously financed advertising" that has targeted Democratic candidates, courtesy of Karl Rove and the Supreme Court -- and the real reasons why the funders of those ads want to remain unknown. "When I was growing up, my mother always told me that if I had a problem with someone, I should go straight up to them, put my shoulders back, make sure they knew my name, and say whatever I had to say -- and not sneak around behind somebody’s back," he said as he stood beside West Virginia Governor Joe Manchin, the embattled Democratic candidate for U.S. Senate. "The reason they don’t want you to know who’s paying for those ads against Joe is because if you knew who they were, it would make you more likely to vote for him."

Like most Clinton speeches, the final version of his midterm pitch included pithy riffs on broad variety of policy issues -- because, as he said later on the plane, the American people "are starving for explanations. They want someone to tell them what the hell is going on. And in the present media environment it is imperative to repeat the same message again and again for anyone to hear it."

The reason that Democrats face such dire prospects in this campaign, he continued, is that the party’s elected leaders have spent the past year enduring a crescendo of attacks from Republican politicians and right-wing media -- without answering them. He seemed mystified that the Democratic leaders had done so little to justify and promote their legislative achievements, which he has been touting at every stop. Conceding that "we made mistakes" that led to his party’s loss of 54 House seats in the 1994 midterm, he added that "now we know a midterm election can be nationalized and should act accordingly."

That is why he tried to frame the election as a set of choices between destructive Republican policies that favor "people like me, who make more than a million dollars a year" and the great majority of Americans who don’t. In full populist mode, he concluded nearly every stop with a riff on fiscal responsibility, recent presidential history, and the false consciousness of the Tea Party.

"Last weekend, I read a touching story article about two ladies who started the Tea Party movement," he said, referring to a profile in the Wall Street Journal. "They were outraged by the bailout. And who wasn’t? President Bush told me that signing the bailout made him sick."

Yet the bank reform bill pushed through by the White House and the Democrats, against Republican opposition, will "outlaw" future bailouts and make financial executives and shareholders pay if they recklessly squander their assets. "So why would the Tea Party support the Republicans, who have promised to repeal that bill because their friends on Wall Street don’t like it?" he wondered.

But beyond that, he said, the Tea Party ought to look more closely at the past 28 years of American history before they reject the Democrats and embrace the Republicans. "During the 12 years before I took office, the Republicans quadrupled the national debt," he said. "I balanced the budget after four years and left a surplus that would have erased the national debt by 2015 if they had left my budget in place." Instead, the second Bush administration doubled the national debt again, bequeathed the nation a series of future deficits -- and failed to create one-tenth as many jobs as Clinton did, while shrinking the size of government as a portion of the national economy.

And, he noted, it was President Obama and the Democrats in Congress who have actually cut taxes for most Americans in the stimulus bill -- not the Republicans. If the Tea Party movement wants more jobs, balanced budgets, lower taxes and smaller government, he insisted, they should be supporting Democrats.

"Where is the love?" he cried. "I ought to be the Tea Party's poster child."

The crowds roared every time.