Why I didn't boo Bush at the World Series

Baseball is about respecting the other team and avoiding cheap shots. But I didn't applaud, either 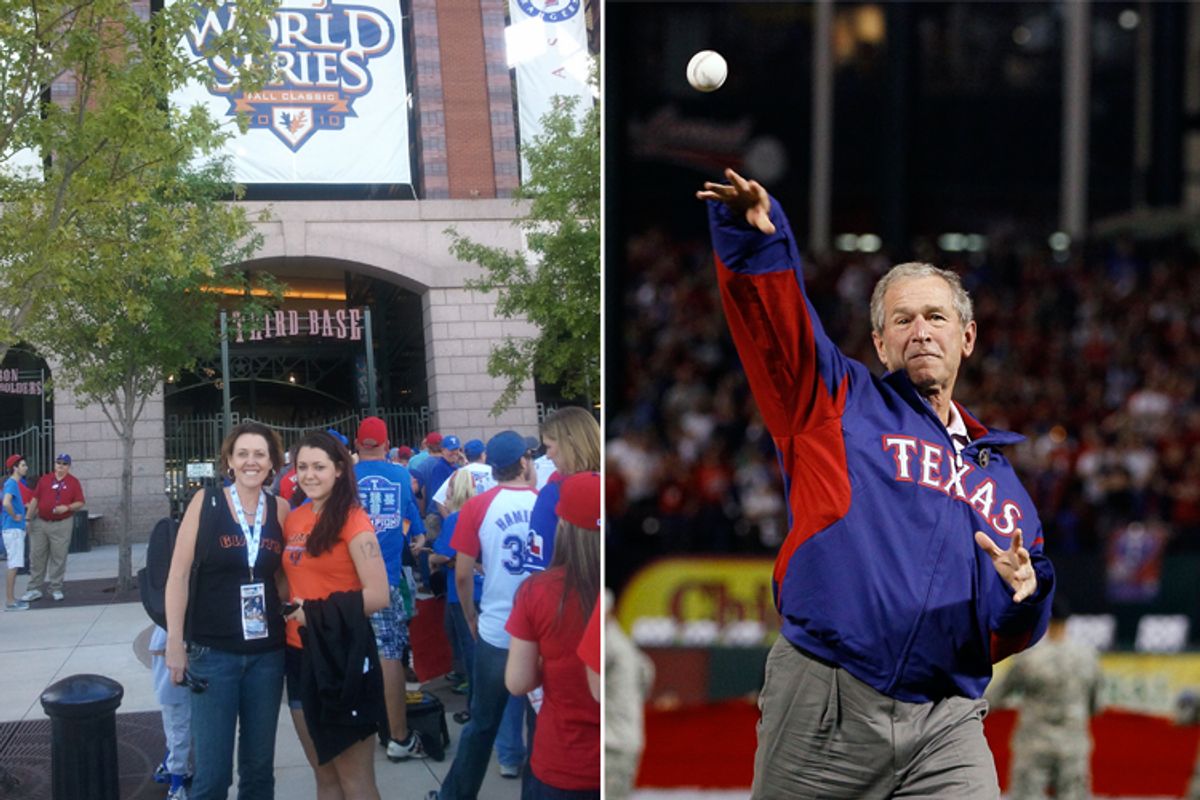 My most vivid early baseball memory is sitting high in the grandstands at Shea Stadium in New York, on Roberto Clemente Night, where it seemed like we were about the only white people around (but I'm probably misremembering). There were a lot of Latin men, for sure, and very few women, but there we were, my little brother and I, with our mother and grandmother, passionate fans of the Mets (and bereft Brooklyn Dodgers lovers). Clemente played for the visiting Pittsburgh Pirates, but my mother was worldly enough about life and baseball to know that the Puerto Rican outfielder was a hero to Latin New Yorkers; as a Jackie Robinson fan, she knew the way baseball could heal the world a little bit, game by game, team by team. So within a few innings we Mets fans were chanting, "Viva Roberto Clemente!" Mom was breaking out her high school Spanish, and the men were courtly and warm and protective, sharing their peanuts and making sure my grandmother could get down the long, steep aisle from the top of Shea. Looking back, it was my first experience of being "the other," a minority in someone else's culture, and it was great. I was respectful, I was treated warmly, I felt little strangeness, no fear.

I thought about my mom and Roberto Clemente sitting high in the grandstands in Arlington, Texas, for Game 4 of the World Series Sunday night, my San Francisco Giants facing the Texas Rangers. I was there with my daughter, and two friends who happen to be Latino, and a whole lot of white Texans. We were decked out in our Giants regalia -- my friend's jersey read "Gigantes" -- and I admit I felt a little discomfort. I had no idea how people would treat us walking into George W. Bush's house, being from the tribe of Nancy Pelosi, Barbara Boxer and Gavin Newsom, home of gay marriage and "Let Timmy Smoke" T-shirts. Complicating everything, Bush himself was throwing out the first pitch, and all day I was watching a virtual debate on Twitter and in e-mail between people saying anti-Bush baseball fans had a responsibility to boo the former president, for costing thousands of Iraqis and Americans their lives in a senseless war, and those insisting booing Bush was wrong. I wasn't entirely sure what I'd do until I did it.

My fears were silly; the Texas fans were warm and friendly. The ballpark at Arlington is one of those old fashioned complexes surrounded by … nothing. (I'm spoiled by our downtown stadium.) We arrived early, the gates were closed, it was hot, and you couldn't even purchase water (no street vendors in buttoned-down Arlington, either). When I asked an usher outside if there was anyplace nearby to buy water, she said no, apologetically -- and then quickly ran to get me a huge cup of it. Rangers fans volunteered to take my daughter's and my pictures, told us nice stories about visiting San Francisco, helped us navigate their ballpark. Sure, we heard jokes about gays, the Castro and all the pot smoke at AT&T Park – two straight male friends were greeted as "domestic partners"; my daughter was directed to the (nonexistent) pot-smoking section, but mostly we enjoyed people's genuine curiosity about our city, and our team. Given that the Giants were already up 2-1 over the Rangers (let alone the Texas-San Francisco divide), you couldn't take that goodwill for granted. Certainly we wouldn't have in Dodgers Stadium, despite our blue-state politics.

Maybe that's why, when President Bush drove onto the field, I didn't join the small but vocal ranks of people booing (most of them, it seemed, Giants fans scattered in nearby sections). We didn't boo, but we didn't clap either; I couldn't fake a respect I don't feel, but I could muster respect for the people around me, who were kind to guests in their baseball home. I noticed the friendly guy next to me, who was lustily cheering for Bush, turn and notice that I wasn't cheering. I smiled and nodded and kept my hands at my sides. We survived. They made a few more jokes about the Castro, where I live; they let my friend remind them that they stole their state from Mexico. ("Wait, wasn't it part of the Louisiana Purchase?" one said, but I think he was kidding.) They endured us chanting "Let's go Giants," even after we took the lead (for good, but you can read game commentary elsewhere). We all sang "Deep in the Heart of Texas" with gusto, and shook hands warmly when we parted, though my team won, 4-0, to put the Rangers on the verge of elimination. I'm not pretending we healed the red-state, blue-state divide, but since I was raised to believe baseball can create small openings that make a big difference, it all made me very happy.

So it was funny that, during my lovely baseball kumbaya weekend, I showed up in the "fear-mongering" montage at the Stewart-Colbert "Rally for Sanity." I should have thicker skin; it smarted a little. I love Jon Stewart and Stephen Colbert as much as anyone in the media/political/entertainment complex where we all toil today. But I think their insisting on left-right "equivalence" in the demonization game is a bit dishonest. Supposedly I was shown calling people "gun nuts" (I can't find the actual montage anywhere; share it if you have it!). But I wasn't referring to all gun owners as gun nuts; as far as I can tell, I've used the term in two cases. Once was referring to William Kostric, the Tea Partier who carried a gun to an Obama rally in Manchester, N.H., in August 2009, who expressed support for birthers, secessionists and shooting cops who arrest drug dealers in their homes.

And once on "Morning Joe," I defended Eugene Robinson's using the term "gun nuts" by pointing to the anti-Obama activists who staged a gun-toting rally in a national park near Washington, D.C., to protest the president's alleged plans to take away their guns -- when in fact it was Obama who signed the law legalizing their carrying guns in a national park.

As Keith Olbermann noted in real-time on Twitter, the Stewart/Colbert critique of liberals who fight back on cable news amounts to unilateral disarmament, because "The America before today's cable wasn't reasonable discussion. It was the 1-sided lockstep of Fox and people afraid of Fox. That got us Iraq." (Read Will Bunch for one of the best critiques of the "Restore Sanity" approach.)

But back to baseball. I guess turning up in the fear-monger montage particularly smarted because I also, partly, agree with Stewart and Colbert: Someone's got to turn down the heat out there, and I actually think of myself as someone who's tried to do that. Certainly I do in small ways, and I tried Sunday night. I was raised to love baseball at least partly because of its story of (belated) social inclusion. The sport got better when it made room for more people; the teams that resisted integration, like the Boston Red Sox, lagged behind. We have so few things that make us pull together as a team in this country, so few models of what we get from our diversity, I treasure the places we can celebrate being a team. I loved seeing those white Texas fans cheering mightily for Rangers manager Ron Washington, if not quite as loud as for Bush.

The Giants are on the verge of winning their first World Series in my lifetime in Arlington tonight; I'm back home in San Francisco. [Update: They won it.] Who knows if Texas fans will be as magnanimous if San Francisco wins the championship in their own home. [Update: Looks like they were, but we'll know details Tuesday] (Who knows if I'd have smiled through the gay jokes and pot jabs if my team had been down 2-1?) Still, my weekend in Arlington helped me remember to look for ways to get along with people, not to fight with them. If someone hates San Franciscans a little less because I was friendly, and opted not to boo George W. Bush, maybe I did my part to restore sanity yesterday.