What to look for in the days ahead: Will Pelosi resign? Will Lieberman switch parties again? What will Obama say? 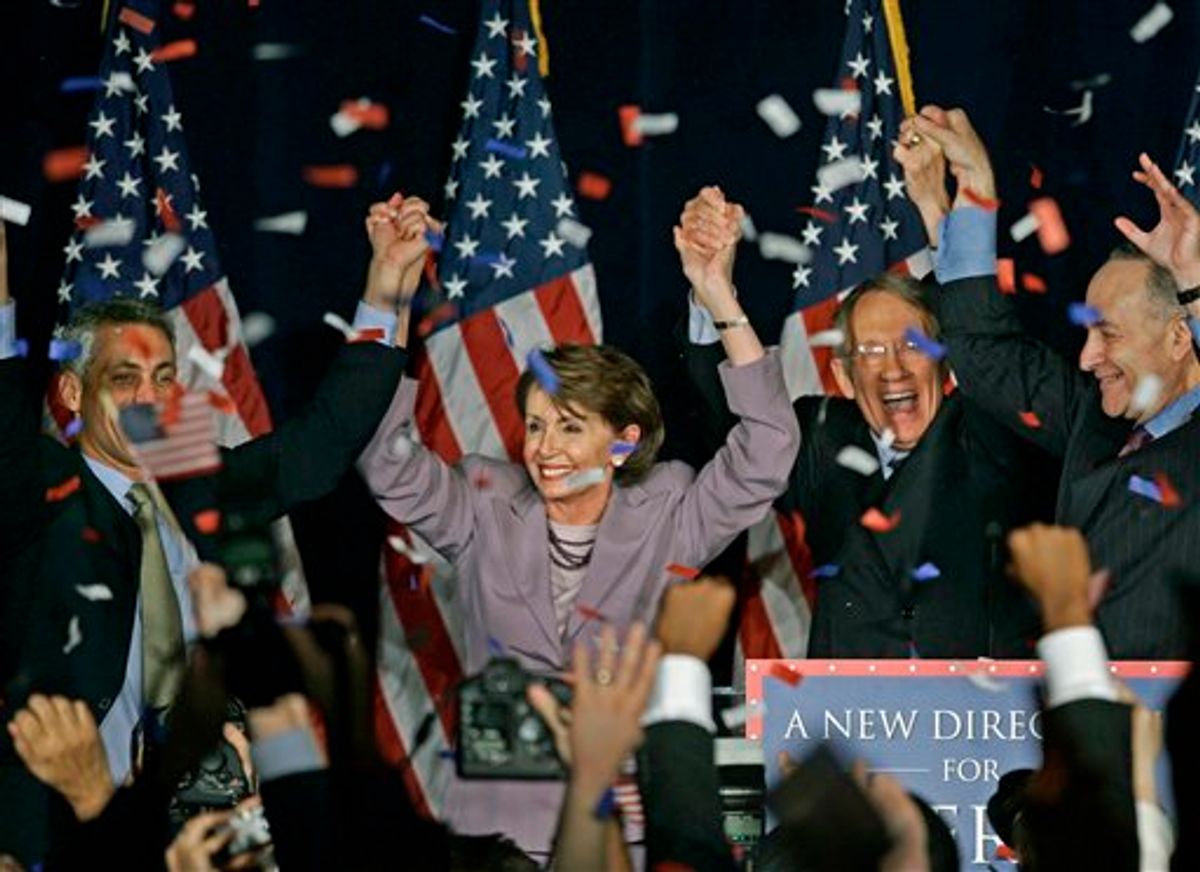 Barring a complete and total shock, we've known for a long time how tonight will turn out: A Republican takeover of the House, and significant GOP gains in Senate, gubernatorial and state legislative contests -- the best election for Republicans since their 1994 "revolution." In that sense, the only suspense tonight involves how bad things will be for Democrats. As Mark Blumenthal put it this morning, "At this hour, however, the most likely range of that error lies somewhere between a Democratic defeat comparable to 1994 and something much more severe."

In this sense, the real suspense won't begin until after the results are known, when just about every major player in politics will finally have to take action in response to a verdict that has seemingly been inevitable all year. Here's what to watch for in the hours, days and weeks after the votes are tallied tonight:

* Nancy Pelosi's future: Assuming Democrats do lose the House, it's a foregone conclusion that she'll step down as the party's leader -- and probably resign her House seat, too. Will she make the announcement on Wednesday? Or will she wait a few days? And will she endorse anyone to replace her as House Democratic leader -- publicly or privately -- on her way out the door?

(Of course, if Democrats somehow hang on to the House, Pelosi will probably -- but not definitely -- survive as speaker; under this scenario, the heat would suddenly be on John Boehner, who might face a leadership challenge from the ambitious Eric Cantor, who could point to the GOP's worse-than-expected showing and argue to House Republicans that they'd have fared better with stronger leadership, improved messaging, or ... whatever.)

* Pelosi's successor: Steny Hoyer, the 71-year-old majority leader, is the morning-line favorite to take over from Pelosi. But his ascension is more complicated than you might think because of long-standing tensions with Pelosi, who bested him in a leadership race nearly a decade ago -- and who hasn't stopped trying to punish him since. In 2006, Pelosi used her muscle to thwart a leadership bid by a Hoyer ally, New York's Joe Crowley, and later that year -- just days after the Democrats won back the majority -- she threw her weight behind John Murtha's effort to supplant Hoyer as the No. 2 House Democrat. If Pelosi has anything to say about her successor as leader, it won't be Hoyer. Watch to see if Connecticut's John Larson, the current No. 4 House Democrat and the man Pelosi used to defeat Crowley in '06, makes a move and gains traction. Also, pay close attention to what California’s George Miller, who will be Pelosi’s top ally left in the House, does.

* The Schumer-Durbin race: If Harry Reid loses in Nevada -- and it's looking suspiciously like he will -- then the fight to succeed him as the Senate's top Democrat is on. We've known for a long time who the combatants will be: Chuck Schumer and Richard Durbin. Conventional wisdom has it that Schumer, who has aggressively positioned himself for the race (and who, as the DSCC chairman in 2006 and 2008, developed close relationships with the senators elected those years), will win. If history is a guide, Senate Democrats will react to a midterm drubbing with a desire to distance themselves from the White House; after the 1994 debacle, both Tom Daschle and Chris Dodd, who ran to replace George Mitchell, campaigned on this theme. Given Durbin's close ties to Barack Obama, Schumer would seem to have an advantage in this department. But internal Senate elections are notoriously tough to call. Four years ago, Lamar Alexander thought he had the race for the No. 2 GOP leadership slot locked up -- only to be bested on the secret ballot by Trent Lott. It remains to be seen whether Schumer will be undercut by concerns that he’s too much of a self-promoter and not sufficiently a team player. Senators like their autonomy, and they may feel that Durbin is a better bet to give it to them.

* What Obama will say: The president will have to react publicly to the results on Wednesday. Presumably, he'll handle it pretty much as Bill Clinton handled the 1994 GOP revolution. "I think I have some responsibility for it," Clinton said the day after that election. "I am the president." He also pledged that "We are ready to work together to serve all Americans in a non-partisan manner," but added: "To those who would use this election to turn us back, let me say this: I will do all in my power to keep anyone from jeopardizing this economic recovery by taking us back to the policies that failed us before."

* The Joe Lieberman factor: Let's say Republicans pick up seats in North Dakota, Indiana, Arkansas, Pennsylvania, Illinois, Colorado, Nevada, West Virginia and Washington -- and hang on to every seat they currently hold (Alaska is the only one that really seems at risk). That would leave the Senate in a 50-50 tie -- which should favor the Democrats, with Vice President Joe Biden breaking the tie. But what if Republicans then convince Joe Lieberman, who remains anathema to the Democratic base and who will be up for reelection in 2012, to switch parties and hand them the chamber? The day after the ’94 midterms, Republicans convinced Alabama's Richard Shelby, who had been elected as a Democrat in 1986 but who had been voting with them frequently, to switch over -- and a few months later, they added Colorado’s Ben Nighthorse Campbell.

* McConnell-DeMint friction: As noted above, it's unlikely, but not impossible, that Republicans will end up with a Senate majority. But either way, Mitch McConnell is safe as their leader -- officially. But how emboldened will Jim DeMint, the South Carolina Tea Party hero, be if Marco Rubio, Rand Paul, Sharron Angle, Ken Buck and Jim Miller all win? The real news after the election might be what DeMint, and not McConnell, says.

* Hysterical overreaction -- from both sides: Who will be the first major voice on the left to call for Obama to face a primary challenge in 2012? Who will try to revive the ridiculous Hillary/Obama rematch rumors? And will any Democratic politicians play along? In the weeks after the 1994 midterms, some of the names advanced as potential primary challengers to Clinton for 1996 included: Bob Kerrey, Jesse Jackson, Bill Bradley, Paul Tsongas and Robert Casey. On the right, we'll hear -- and, in fact, we're already hearing -- over-the-top claims of a massive, lasting ideological shift on the part of voters, away from liberalism and to conservatism, even though a big Republican win can be easily and credibly explained by structural factors. The exact same claims were made in 1994 -- George Will called that year's result Ronald Reagan's "third national victory" and used his post-election column to sniff at claims that there was any way for Clinton to get back in the game for 1996. We all remember how that turned out.

* The '12 race takes shape: It was less than a month after the 2006 midterms that a Democrat declared his candidacy for president in 2008 -- Tom Vilsack, the outgoing Iowa governor. (Well, technically, the first Democrat to enter the race was Mike Gravel earlier that spring, for what that's worth.) Vilsack didn't make it to the finish line (he endorsed Hillary Clinton, hoping to impress his way onto the ticket with her by delivering Iowa -- only to watch her finish third in the state's lead-off caucuses), but we'll probably see at least one long-shot Republican make a similar early move after this election. Who will be the first? Rick Santorum? Mike Pence? Tim Pawlenty? The heavier weights, like Mitt Romney, Sarah Palin and Mike Huckabee, will presumably wait until early next year to make it official.