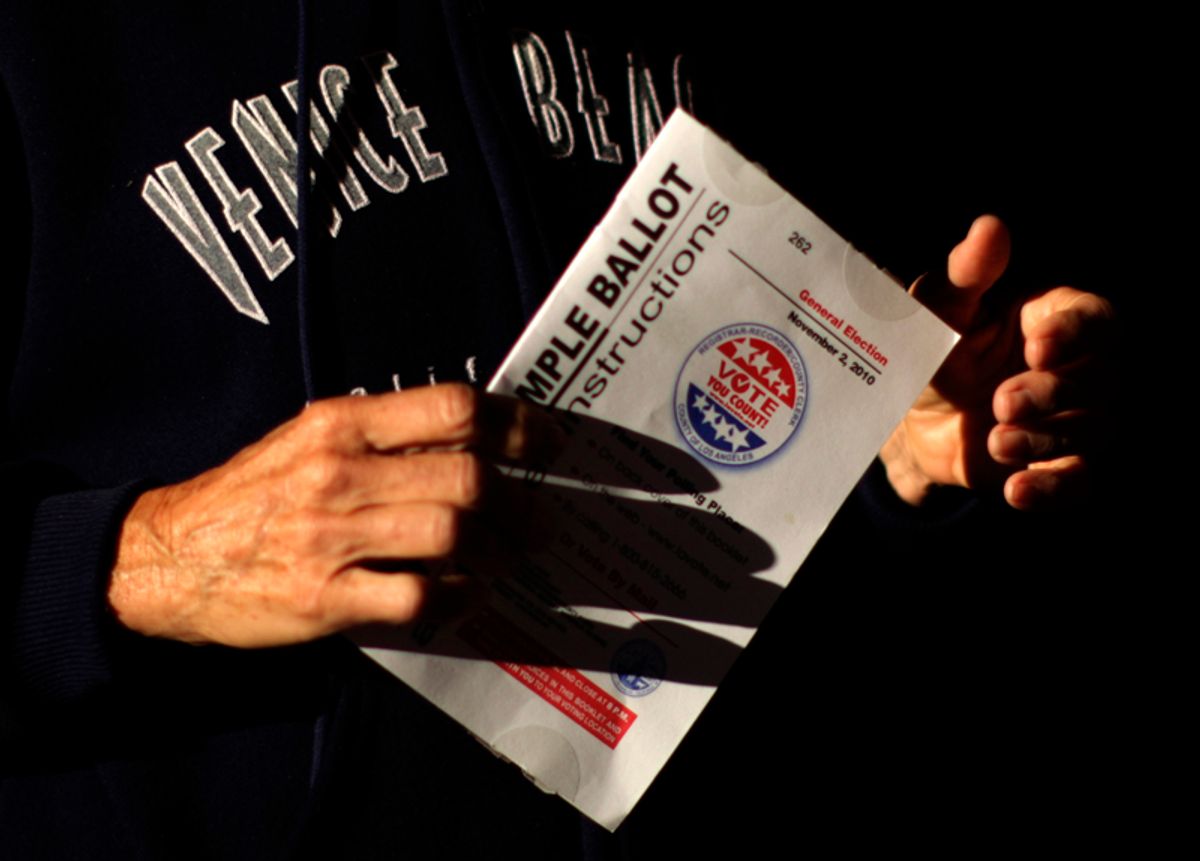 A woman arrives to vote at a polling place on Venice Beach in Los Angeles, California, November 2, 2010. After a long and bitter campaign, Americans cast their votes on Tuesday in elections that could sweep Democrats from power in Congress and slam the brakes on President Barack Obama's legislative agenda. REUTERS/Lucy Nicholson (UNITED STATES - Tags: POLITICS ELECTIONS) (Â© Lucy Nicholson / Reuters)
--

UPDATED: As always, we're seeing sundry allegations of voter intimidation and voter fraud crop up around the country. Here's a quick survey at what's being reported out there so far.

Early this morning, self-identified tea party activists showed up at a polling station near Benedict College in Columbia, "basically harassing students—telling people not to vote and generally making voters feel uncomfortable," says Keiana Page, press secretary for the state Democratic Party, who said that the party's legal team is currently investigating the reported incident at the historically black college.

The Delaware Democratic Party tweeted this afternoon about unspecified "reports" of voter intimidation in Dover.

Meanwhile, a member of the New Black Panther Party has reportedly shown up at the same Philadelphia polling place where New Black Panthers were standing in 2008, an episode which was quickly seized on by conservatives as evidence that the Obama Administration refused to protect white voters. A Fox affiliate reports today (click through for the photo) that the Black Panthers member is "wearing a pin that indicated his party affiliation, along with a black hat, sunglasses and leather coat."

TPM reports that the Kansas Attorney General is looking into reports that some voters were called and told "the election has been moved to Wednesday, that they need to bring their voter registration cards to the polls and that they need proof of homeownership to vote."

As far as voter fraud, there's not much being reported yet beyond this allegation in Crow Wing County, Minnesota:

Monty Jensen, 29, of Crow Wing Township provided the Brainerd Dispatch with a copy of the complaint he filed Monday requesting the investigation. In that document he said he witnessed on Friday what appeared to be staff members from a facility for people with mental health problems who filled out a client's ballot and who verbally instructed a client who to vote for during absentee balloting.

We'll update this post if anything major develops, so stay tuned.

UPDATE: Ben Smith reports on a flier that's allegedly going around in Houston from the "Black Democratic Trust of Texas." The confusing flier tells voters that machines will count straight Democratic ballots for the Republicans, so they should select only the Democratic gubernatorial candidate and not vote in the downballot races.