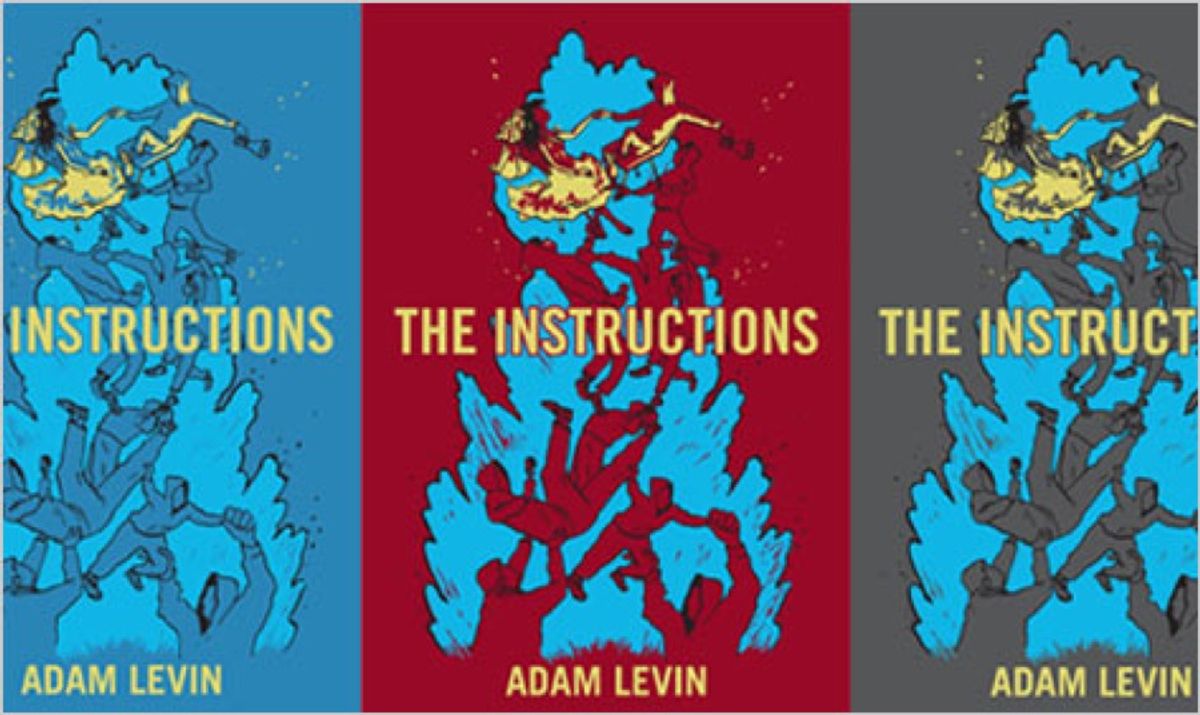 Adam Levin's dark, funny, and deeply provocative first novel, "The Instructions," comprises the scriptures of one Gurion ben-Judah Maccabee, an impossibly articulate ten-year old who might or might not be the messiah. When I say "impossibly," I do mean impossibly, but Gurion is no cutesy child hero. He shares with Oskar Schell -- the young, tambourine-playing pacifist vegan of Jonathan Safran Foer's "Extremely Loud and Incredibly Close" -- a fixation on the horrors of the past, and like Schell's his story is propelled by a series of unlikely, seemingly symbolic coincidences. Here, though, there is no redemption, only confusion and violence -- an indictment of tribe mentality, and of the concept of being "chosen."

Gurion's scholarly erudition is so staggering, so monumentally over-the-top, that the accusation of its implausibility is embedded in the book itself. A footnote excerpts a letter from Philip Roth (his fictional counterpart, anyway), who misreads fan mail from Gurion as an adult's "terrifically cruel and on point" mimicry of "recent so-called Jewish wunderkind authors." Roth urges him to stop "writing from the unconvincing POV of a boy-genius whose name suggests a messianic fate" and instead to adopt the more realistic perspective of a man remembering his childhood "as a time when he, like so many of us, suspected that he was the messiah."

Even at five years old, we are told, the boy asked scriptural questions so complex that his mentor, a rabbinical scholar, was moved to transcribe their conversations. No doubt the allegorical touchstone is different for Jewish readers, but for this fundamentalist-raised gentile the obvious echo is of Jesus' three-day debate, at age twelve, that left Jerusalem's temple elders astonished. (Luke 2:46-47) At times, like the fictional Roth, I struggled with Gurion's voice -- with the high diction, and the essaylets and other postmodern flourishes -- but Levin has an uncanny facility for blending sympathy and satire, for making us care about his charming but dubious hero and for infusing life into this alternate, slightly fantastical reality that's very much like our own. "The Instructions" recalls both the real Philip Roth's "The Plot Against America," in which aviation hero and Nazi sympathizer Charles Lindberg defeats FDR on an isolationist platform and winds up in the White House, and Kurt Vonnegut's "Slapstick," in which members of the Church of Jesus Christ, Kidnapped are required to "spend every waking hour" trying to find their savior, who was "kidnapped by the Forces of Evil" at the second coming. And, like Roth's and Vonnegut's, Levin's flights of fancy are placed in service of a deadly serious project. Not only is he, as he recently told The Chicago Tribune, having "a conversation with Jewish literature," he's illustrating, in a wholly original way, exactly what sort of catastrophe results when fervent religious conviction meets brute force.

Gurion may be a scholar, but he's also a thug, at least according to his record. He's been kicked out of three schools, for starters. The first, the ultra-orthodox Schechter, booted him for throwing a stapler at a rabbi who said "the all-time snakiest thing anyone had ever said to me": that Gurion could not be the messiah, because "‘The messiah will be a Jew.'" "I was half lost-tribe," Gurion explains. "You couldn't see it in my skin unless you were trying, but my mother's parents were from Ethiopia and a few Ashkenazis still thought that meant I wasn't an Israelite." Northside Hebrew Day expelled him for distributing a pamphlet to teach fellow students how to make a pennygun -- a sort of sling shot -- from a balloon, a penny, and the sawed-off top of a soda bottle. The instructions, inspired by an attack Gurion witnessed on a synagogue, required recipients to pass them along, in secret, to other Israelites (Gurion rejects the word "Jews"), so that they would never again "cower amidst the masses of the Roman and Canaanite children." Next Gurion was assigned to the lock-down program at Martin Luther King Middle School, where he lasted four days before he was accused, wrongly, of beating a boy with a cinder block.

Now enrolled at Aptakisic Junior High, Gurion has been placed under all-day surveillance with the school's other most dangerous kids, in "The Cage." Cut off from his fellow Israelite scholars, Gurion is drawn to kids who are, as he puts it, damaged. Meeting Eliyahu of Brooklyn, a Hasidic new arrival at AptakisicI – who is both damaged and an Israelite -- causes Gurion to reflect that "Everyone I liked who wasn't damaged was a scholar. Rather, everyone I liked who wasn't a scholar was damaged. Or maybe the first way. The stress kept shifting." His scriptures are primarily for "all the Israelites," but also for "anyone who's on the side of damage." In his heart of hearts, Gurion knows he can't lead both the chosen and the damaged, but as a member of both groups he refuses to choose.

The pressure that refusal comes under is made more explicit by the fact that those who shape Gurion's messianic project most are not in fact Israelites. He learns how to write scripture from the novelist, motel owner, and ex-lawyer Flowers, who forbids Gurion "to portray him as a wise old black man who gave life-lessons to an Israelite boy."'I think you best not harp on about being the messiah,'" Flowers tells him. "'[L]eak it in slowly while you're hooking everyone, and then Blast!'"

When Gurion falls in love with a troubled but talented red-haired girl, he's convinced she's Jewish even after his mother pronounces her name -- Eliza June Watermark -- "the single most goyishe" she's ever heard. "Hashem would never fall me in love with someone who wasn't an Israelite," he explains. When June reveals the next day that she's a Unitarian, Gurion is distraught and rageful, but decides, partly on the strength of their matching birthmarks that are "an abbreviation of Adonai's best written name," to convert her; since Adonai neither yells "No" nor paralyzes him during the impromptu ceremony, Gurion pronounces June an Israelite.

And then there's Gurion's best friend, Benji. Although he isn't an Israelite either, Gurion includes him in the dissemination of the contraband pennygun-making documents. But Benji is instructed to destroy the pamphlet rather than join in its viral spread. "‘Mine says if I don't burn it we're enemies,'" Benji says, when he encounters the original. "'Theirs say, strangers, please spread this to other strangers.'" "You want me to apologize?" Gurion says. "Cause you're not an Israelite? Because I am?"

Gurion's dilemma -- the impossibility of protecting the downtrodden while leading God's chosen people -- is tied up in the words of the Israelite prophets, in specifically Jewish tropes of identity. And it is the specificity of his tangled doctrinal illogic that makes him so sympathetic and compelling. But in our fanaticism-addled world, the implications of his story's tragic arc resonate much further. To carve out any group for salvation is to condemn everyone outside it to damnation of one kind or another.

Inevitably, given this debut novel's range, energy, and sprawl, pre-publication quotes compare Adam Levin to David Foster Wallace. And in its footnotes and asides, its thoroughgoing but wholly approachable intellectualism, and its relentless self-awareness, "The Instructions" really does recall "Infinite Jest." Other forebears -- Roth, Salinger, Cervantes, and "The Book of Jonah" ("the most deadpan comedy ever written") -- are explicitly evoked by Gurion himself.

But the ability to engender true sympathy in a reader for the schemes of a narcissist is a very particular and rare sort of talent. There is, of course, Humbert Humbert, whose criminal seduction of Lolita Nabokov somehow enlists his reader in rooting for. And the antihero of Iris Murdoch's "The Sea, the Sea" fascinates as much as he repels when he takes his first love hostage. As I mull over "The Instructions," though, my mind keeps returning – again I reveal my goyishe frame of reference -- to John Milton's Satan, the most compelling figure of "Paradise Lost." And I think of the words of an aging country squire (quoted by Philip Pullman in an introduction to the poem), who wrote, transfixed by the fallen archangel's saga, "I know not what the outcome may be, but this Lucifer is a damned fine fellow, and I hope he may win!"