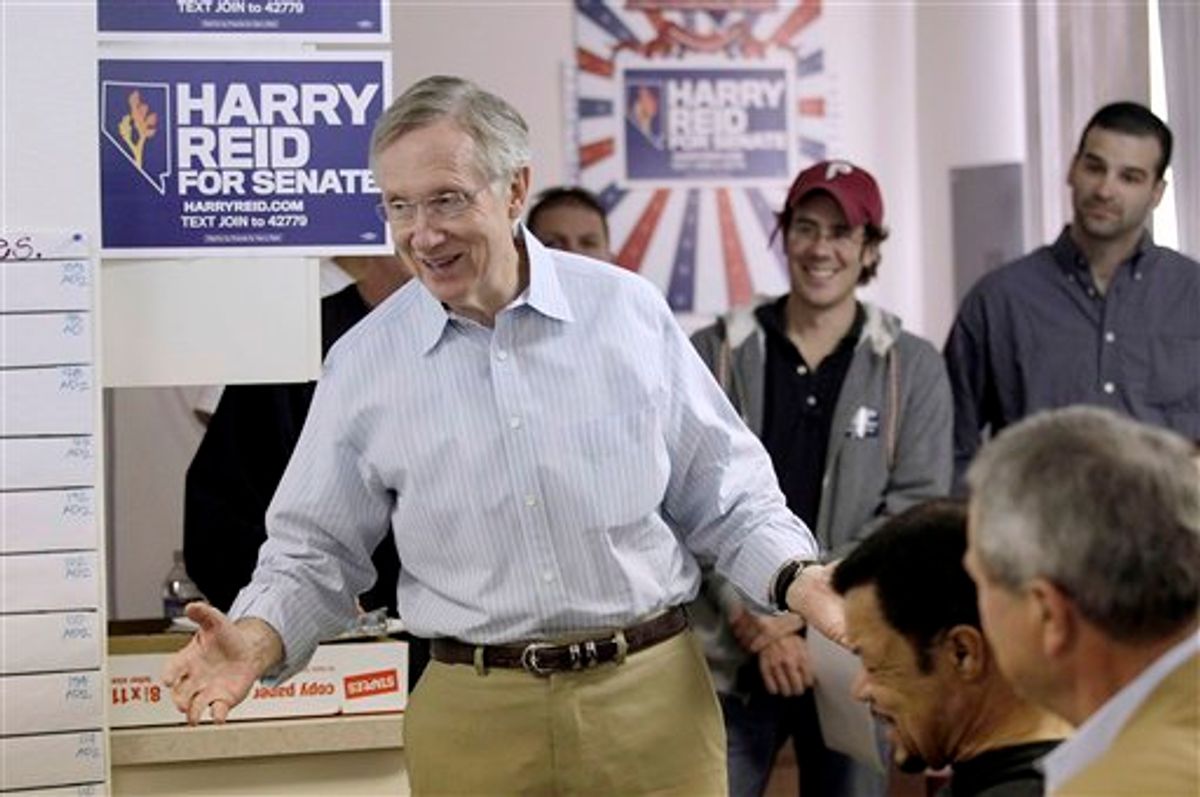 Over the summer, I likened Harry Reid's battle for survival to the Oliver North-Charles Robb Senate race of 1994.

The parallels were striking. In '94, Robb was a deeply unpopular Democratic senator seeking reelection in a Republican-friendly state -- with the national climate poisoned against his party. Virtually any Republican in the state would have had no trouble beating him -- except the man the GOP nominated, North, whose Iran-Contra baggage was so severe that voters decided to reelect Robb. The setup was the same as in Nevada this year, with Reid's popularity ebbing to all-time-low levels  and with the political environment as hostile to his party as it has been since 1994. But the result, we can now say, was also the same: Thanks to the GOP's decision to nominate Sharron Angle, a polarizing Tea Party candidate, Reid has held on.

Here, some crow-eating is in order. On the eve of the election, I cast doubt on predictions that Reid would survive, and I panned his debate performance two weeks ago, believing that he had squandered a precious opportunity to wound Angle. Shows what I know. Still, it doesn't take a PhD to realize that Reid's victory had everything to do with the liabilities of Angle. A more conventional Republican opponent would have had little trouble defeating Reid in this climate. In this sense, the Tea Party can be directly blamed for the reelection of the Senate majority leader; it was, after all, the GOP's Tea Party base that insisted on Angle's nomination.

Reid's victory also means there will be no leadership fight in the Senate. Chuck Schumer and Richard Durbin had both been preparing to fight over the right to replace him, but now they'll have no choice but to welcome him back and put their ambitions on hold -- maybe for good. How long Reid will stick around as majority leader is hard to say. Democrats will have to defend a ton of seats in 2012, a function of their strong years in the 2000 and 2006 elections, and their majority has been reduced to 53 seats -- maybe even less. Even if Barack Obama wins reelection in 2012, Democrats could lose their majority, which could easily lead to Reid being pressured to step down as leader. Or maybe, at 73 years old and after eight years on the job, he'll simply have had enough. (Or maybe not!)

That's a topic for another day, and it's surely one that's not on Reid's mind now as he celebrates a victory that few believed he could achieve.