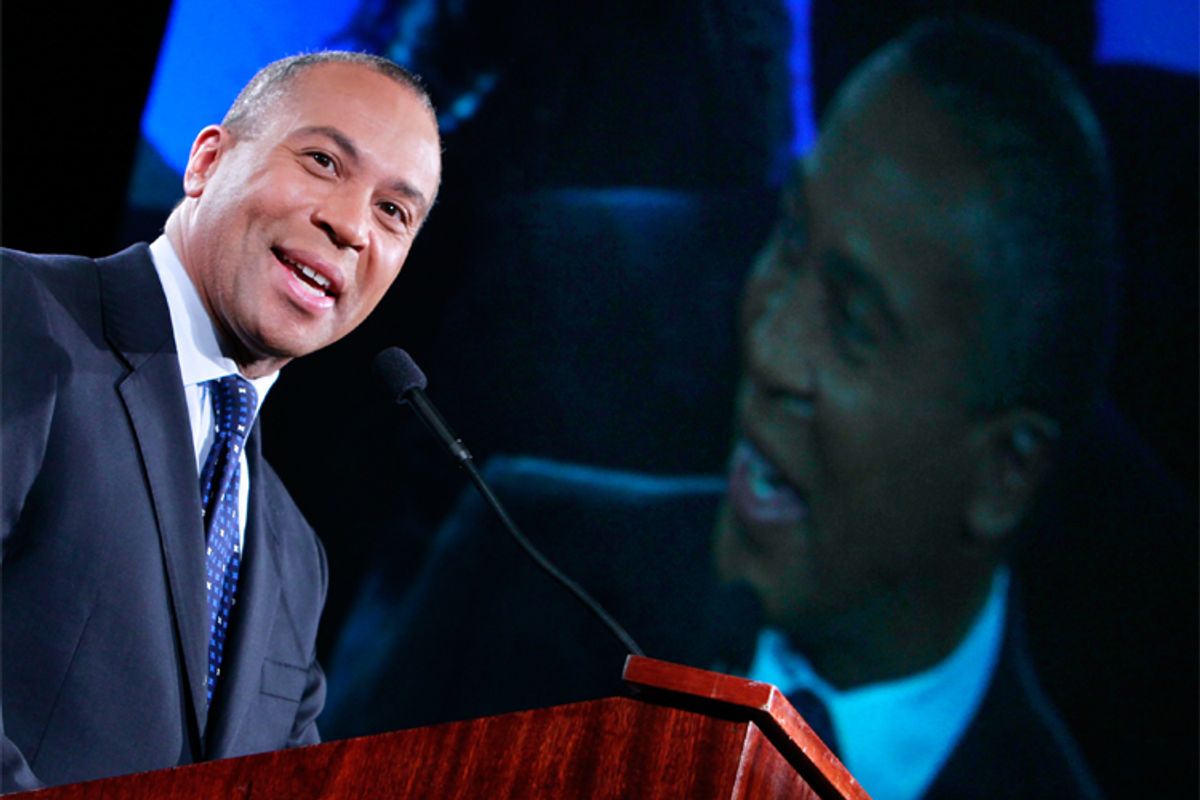 Remember how this all started -- back in January, when we all looked up, shocked to discover a Republican on the verge of winning the Senate seat Ted Kennedy had previously held for more than 46 years?

Scott Brown’s triumph in Massachusetts' Jan. 19 special election, the first Republican victory in a Bay State Senate race since 1972, was the first clear, indisputable evidence how toxic the combination of soaring joblessness and total Democratic control of Washington could be for the party this year. That combination resulted in the GOP’s takeover of the House on Tuesday night, with the party gobbling up around 60 Democratic-held seats, and its significant gains in the Senate -- a pickup of six seats, it appears. Republicans also gained numerous governorships and state legislative chambers.

But, curiously enough, there’s one place where they didn’t do much winning on Tuesday night: Massachusetts.

Take Deval Patrick, the state’s embattled first-term Democratic governor. When Brown won in January, Patrick rocketed to the top of the endangered list, especially with Republicans fielding Charlie Baker, a former William Weld lieutenant who shared his old boss’ appealing mix of economic conservatism and social liberalism. As his running mate, Baker chose an openly gay state legislator. Brown’s victory had demonstrated that swing voters in the Bay State, for the first time since before the Gingrich/Bush era, were willing to vote for Republicans, and Patrick’s approval numbers were anemic. The setup, in other words, was perfect for a GOP takeover of the State House.

And yet, Patrick won on Tuesday night -- with remarkable ease. When the final votes were tallied, he’d beaten back Baker’s challenge by a comfortable 7-point margin. The outcome came after a campaign in which Patrick mounted a vigorous, good-spirited defense of his record. His happy warrior act reminded voters of the man the optimistic outsider they’d elected in a landslide four years earlier -- and contrasted favorably against the cool public demeanor of Baker. It’s true that an independent candidate, state treasurer Tim Cahill complicated the race, but he didn’t win it for Patrick, who still received 49 percent of the vote; campaign polls showed Cahill’s supporters split about evenly when they were forced to choose between the top two candidates.

Nor was Patrick’s success an aberration. Republicans launched a concerted push for two down-ballot statewide offices, auditor and state treasurer, but fell short in both contests. (The winner in the treasurer’s race might be a familiar name: Steve Grossman, who served as chairman of the Democratic National Committee under Bill Clinton.) All six of Massachusetts’ constitutional offices will still be controlled by Democrats going forward. Even Martha Coakley, who was last seen melting down in her race against Brown, had no trouble retaining her post as attorney general, beating back a weak Republican effort (the GOP candidate only made the ballot after launching a write-in campaign in the primary).

Plus, Democrats thwarted the GOP’s best chance in years to win one of the state’s ten congressional seats. Republicans had high hopes that state Rep. Jeff Perry would win the open seat from the Cape Cod/South Shore-based 10th district, which gave Brown 60 percent of its vote in January. National observers had rated the contest a toss-up. But in town after town, Perry finished with a substantially lower vote share than Brown received, allowing Democrat Bill Keating to claim the seat. In the three other districts where the GOP mounted a credible fight, against Barney Frank in the 4th, Niki Tsongas in the 5th, and John Tierney in the 6th, Democrats also survived by double-digits. As a result, the state’s House delegation will remain all-Democratic -- the largest single party delegation in the country. It has now been 16 years since Republicans won a House race in Massachusetts.

Democrats also managed to gain a seat in the state Senate – which they had already controlled by a 35-5 margin – while voters rejected a ballot initiative that would have slashed the state’s sales tax to three percent. Republicans did manage to make some gains in the state House of Representatives, but they increased their ranks from 15 to 30 -- out of a total of 160 seats.

There are a few ways to look at liberalism’s apparent triumph in Massachusetts last night. That Patrick ran a strong campaign -- and that Baker mounted a comparatively weak effort that disappointed many Republicans – was certainly a factor. And his success clearly had down-ballot ramifications. It also may be that Massachusetts voters, having expressed their frustrations in January, weren’t quite as ready to blindly reject Democrats as voters were nationally.

But the results also seem to validate point that was debated intensely last January: that Democrats did not have to lose the Kennedy seat, and that a candidate other than Coakley would have been able to hold off the Brown tide. Even in defeat last night, Republicans performed better than they usually do in Massachusetts; they still lost most races, but they came reasonably close to victory in a number of them. That’s what the climate of 2010 meant in a blue state like Massachusetts -- that Democrats would have to sweat out races they’d take for granted in other years. But the difference between Patrick’s win last night and Coakley’s loss in January was that Patrick waged a strong campaign, one that challenged voters’ doubts about him, instead of reinforcing them. And as a result, Massachusetts -- the only state to vote for McGovern over Nixon -- has once again defied a national conservative tide.