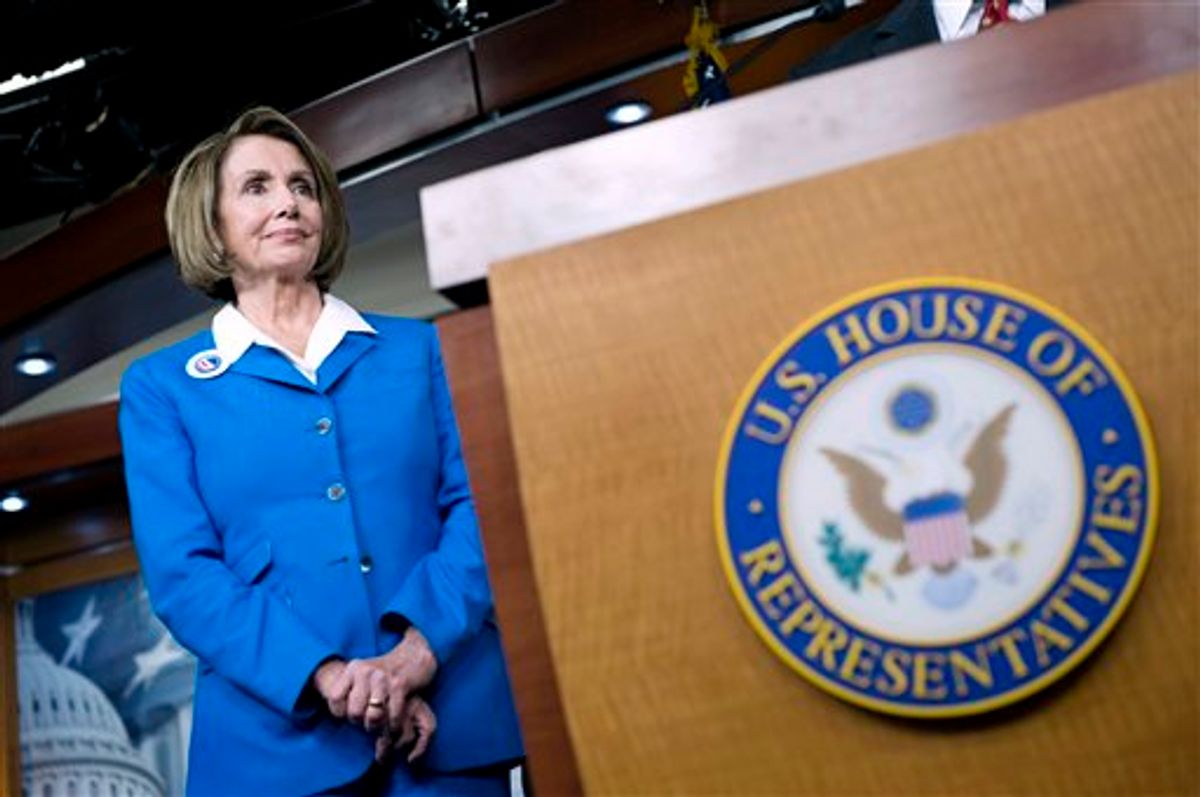 FILE - In this Sept. 30, 2010 file photo, House Speaker Nancy Pelosi of Calif., listens to a reporters question during a news conference on Capitol Hill in Washington. In these angry political times, Democrats and Republicans agree on next to nothing. China is one exception. Democrats and Republicans alike are accusing each other of cozying up to Beijing and backing policies that send U.S. jobs and IOUs to the world's second largest economy. (AP Photo/Cliff Owen, File) (AP)
--

As public faces of America's most chronically maligned institution, congressional leaders are never really that popular. Even Tip O'Neill, whose Irish charm and gruff, grandfatherly demeanor won him his share of fans, was a useful tool for Republican ad makers in the early 1980s. So when it comes to mass opinion, the best advice for a speaker of the House is probably this: Keep quiet and let your lieutenants do the talking -- then maybe your image will be as benign as Denny Hastert's.

But Nancy Pelosi wasn't interested in blending in. She was 66 years old when she finally claimed the top job in the House in 2007 and 68 when a president from her party came to power. Democrats in Washington had been playing defense since the Gingrich revolution, but finally, with Barack Obama's inauguration, they had the numbers to make things happen, and she was determined to lead the way.

Asked shortly after Obama's 2008 victory (in an election in which the Democrats' majority in the House expanded to 255 seats) what she wanted to achieve in the next two years, Pelosi identified "growing the economy, expanding healthcare, ending dependence on foreign oil and ending the war in Iraq" as her priorities. And she largely delivered.

The story of the first half of Obama's first term, let's not forget, is one of partial legislative triumph. On issue after issue, Pelosi's House produced for the president. The stimulus was larger before the Senate watered it down. Cap-and-trade made it through the House, before dying in the Senate. A stronger healthcare reform package -- one with a public insurance option -- was pushed through the House, only to be stripped down by the Senate. Ditto for Wall Street reform. And let's not forget the lower-profile legislation, on fair pay, student loan reform, cash-for-clunkers, and credit card reform, that made it through both chambers. The 111th Congress will be remembered for the way it ended, with a seismic Democratic defeat, but that doesn't change the fact that it was one of the most productive -- ever.

Pelosi deserves enormous credit for this. She was disciplined and organized and asserted unusual control over the chamber. She could also be ruthless, in an effective way. Spying an opportunity after the 2008 election to adopt major climate change legislation, she engineered the ouster of Rep. John Dingell, the longest-serving member of the House and an icon of Rust Belt Democratic politics, from the chairmanship of the Energy and Commerce Committee. Dingell, with his loyalty to Detroit, she concluded, would be an obstacle to stringent emissions standards. In his place, she installed her ally, Henry Waxman, a stanch environmentalist from Southern California.

I don't know if Pelosi expected that the accomplishments of the 111th Congress would make her popular, but they didn't. There's really no surprise in this, since the 111th Congress has coincided with a sustained period of near-double-digit joblessness and economic anxiety that we haven't seen in three decades. As a general rule, people don't like Congress. But when the economy is bad, that feeling takes on an unusual intensity and urgency. You can tell the voters that the stimulus you pushed through actually cut their taxes or that healthcare reform will lower the deficit in the long run, but it will fall on deaf ears. People have already decided that they're angry at Congress; no matter what you tell them, they will find a way to validate that feeling. Thus, Pelosi found herself with an approval rating of 29 percent this fall. And thus, she found her party losing around 55 seats on Tuesday night.

In a way, Pelosi's party lost its majority for the same reason it won it. Voters in 2006 and 2008 were motivated primarily by their exasperation with George W. Bush and the Republicans who had been running Washington. They felt uneasy, apprehensive and anxious, and they indiscriminately took it out on the party that was running the show. They did the same thing this year.

Pelosi will now step down as the Democrats' House leader, and she'll presumably depart Congress as well. At 70 years old, her political career is likely over. Congress is a funny, insular place.  Mastering it the way Pelosi did is an art that is much more a liability than an asset with voters. Her outspokenness, her unapologetic liberalism, and -- yes -- her gender, made her a rich target for Republicans, especially when the economy collapsed. But she refused to back down.

Her climb to the top of the House remains an amazing feat. Elected in 1987, she outlasted Steny Hoyer in a years-long test of wills and finally claimed the party's top leadership post in 2002. But even then, no one thought she'd ever be speaker, especially after the 2004 election, when Republicans gained seats and the idea of a "permanent Republican majority" became conventional wisdom. She seemed to understand, when she finally claimed the gavel, that her chance to make a lasting impact might be limited. She certainly made the most of it, even if the polls never showed it.