Is there any silver lining for Dems? 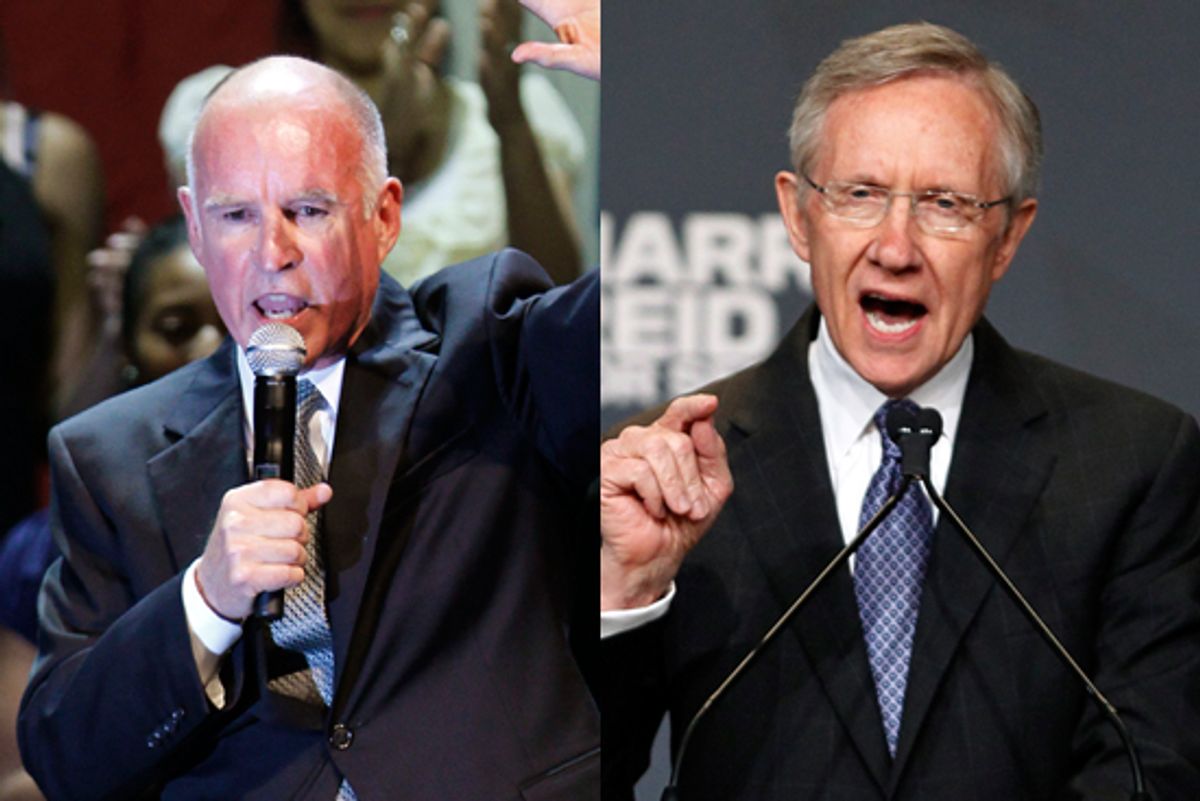 Democrats are cleaning up after a storm Tuesday night and trying to find silver linings in the clouds. Democrats lost the House by the biggest margin since Truman was president and made gains in the Senate. Exit polls showed up to 90 percent of voters said the scary economy drove their vote.

It's clear the party was doomed by coming to power in the worst economy since the Great Depression. Some Democrats are going to continue pointing back to the fact that President Obama and the 2009 Congress inherited that mess. But I think that's a losing argument: They've had the levers of power for two years, and I don't think it's irrelevant that in so many polls people complained that Obama bailed out the banks and passed a stimulus that didn't work. Strangely, I watched Democrats including MSNBC's Lawrence O'Donnell try to blame the blowout on whiny progressives. O'Donnell asked Rachel Maddow why Wisconsin stalwart Sen. Russ Feingold lost, if the diagnosis of many lefties was that less wimpy Democrats might have done better in this sad midterm, given that he was arguably the least wimpy Democrat in this cycle.

My answer would have been: Russ Feingold and other progressives who lost weren't really tested fairly. They weren't able to run on the results of their own political priorities, like a robust stimulus that might have created more jobs, or more aggressive healthcare reform that might have solved more people's real-life problems and reined in insurance company abuses before 2014. We never saw the practical or policy promise of the Democratic class of 2008, and the party will suffer for its inability to make a palpable difference for its constituencies despite the margins it had in the House and Seante.

Also on MSNBC, Chris Matthews asked outgoing Pennsylvania Gov. Ed Rendell why Democrats hadn't pushed for more effective job creation programs to bring back the economy. "The problem is, Chris, we're afraid," said Rendell, and he summed up the whole night – and the last two years -- for Democrats. With the possible exception of Nancy Pelosi (and assuming she loses her leadership post because of her loyalty to the Obama agenda, she might prove that no good deed goes unpunished), almost no Democratic leaders stepped up and grabbed the crisis they were handed and made a clear case for a more robust government response to the bank collapse, the foreclosure crisis, the unemployment disaster, the BP scandal or any of the other failures of our decades-old, dysfunctional winner-take-all political and economic system. And Pelosi alone couldn't make bills law; we'll never know whether the actual agenda she pushed through Congress might have improved the country and helped voters see why it's worth voting for Democrats.

As it often is, my state of California is an outlier. Listening to the sports radio station that broadcast my World Championship San Francisco Giants games all summer (you knew I'd get that in on this sobering night) I got an earful of the GOP strategy for the 2010 elections. Meg Whitman had her harshest anti-welfare ads on KNBR; just today, ran an ad absolutely lying about Brown's (disappointing to me) position on Prop. 13. Only yesterday, I heard an ad attacking Jerry McNerney for supporting "the Wall Street bailout" and "the failed trillion dollar stimulus."

So even though I live in a blue-state, I got the gist of the GOP message that won nationwide -- but was defeated in California. We live in a blue bubble: Whitman lost to Jerry Brown, Barbara Boxer defeated failed Hewlett-Packard CEO Carly Fiorina, Gavin Newsom is our new lieutenant governor, and even McNerney seemed on the verge of pulling it out early Wednesday morning.

The McNerney ad was a window on the message that worked for Republicans nationwide. They attacked Democrats for Obama programs, and pledged to look backwards – and still they won. Still, 25 vulnerable conservative Blue Dog Democrats lost too. It was that kind of year.

California will have turned out to be the party's thick blue line, especially in the Senate, where Boxer's victory almost assured the Dems would hold that body. I'd like to say that's our superior judgment and better candidates, but I'm not sure. Fiorina and Whitman defeated themselves; they were two wealthy ex-CEOs who thought they could buy their way into office, and who overlooked state voters' hunger for a government they can trust.

There were other bright lights in the darkness: Harry Reid defeating Sharron Angle; Tea Party candidates losing 54 of 89 contests, John Boehner strangely losing his composure even as he became the likely speaker, Christine O'Donnell going up in flames. But the results were bad news for Democrats, and we'll be diving into the details of the results for weeks to come.