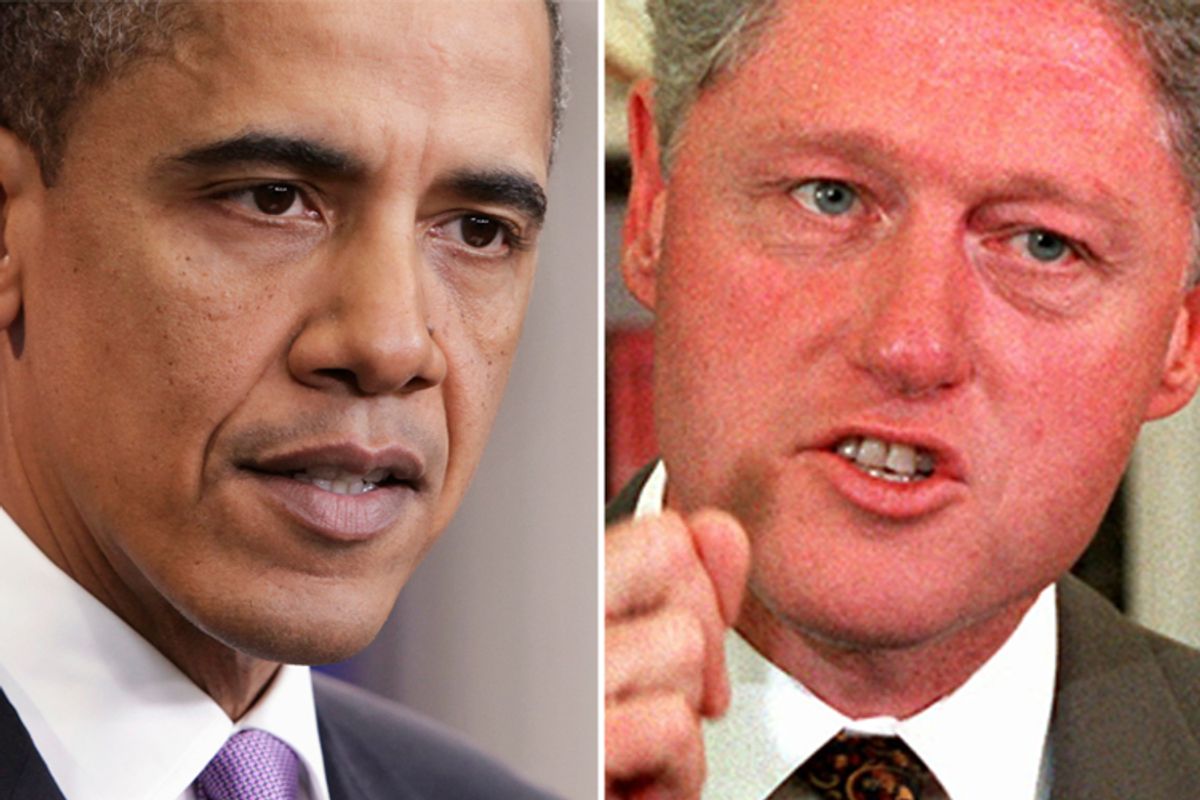 Long before the dismal results of Tuesday’s election were complete, one especially dog-eared bit of guidance for President Obama was getting wide circulation in the mainstream: He must now emulate Bill Clinton, who "shifted to the center" after the electoral debacle of November 1994, "triangulated" his way to compromise with the Republicans, and won a second term.

Among the reasons why such advice is outdated and useless, the most obvious may be that Obama’s position today is stronger than Clinton’s after 1994. Today, unlike then, the Democrats can look forward to retaining control of the Senate. But there are two other overriding reasons why Obama shouldn’t seek to imitate Clinton by immediately seeking compromises with the Republicans.

The first is that he has tried vainly from the beginning of his presidency to engage the Republicans in negotiation over vital reforms, only to learn again and again that they aren’t really interested in anything but sabotage. The second is that compromising with the Republicans isn’t exactly what Clinton did -- or not at first, anyway. Before he could do anything else, he had to push back.

Yes, Clinton made a rhetorical gesture toward the Gingrich "revolution" when he said that "the era of big government is over." As things turned out, however, that remark was studded with asterisks, footnotes, and exceptions that gave "big government" a meaning entirely different from the standard conservative interpretation. Yes, he eventually signed a welfare reform bill -- ending the family support entitlement "as we know it" -- which he had promised to do in his 1992 campaign (although he later emended many of that bill’s worst features). And yes, he sought to balance the federal budget at a time when that seemed a heresy to the Democratic base.

Yet the most important political events in the first year following the ’94 midterm were not compromises over policy, but confrontations that swiftly became disruptive, angry, polarizing -- and that Clinton won. When the Gingrich Republicans twice shut down the government at the end of 1995 in order to win their way on the budget, the president faced them down and portrayed them as right-wing extremists whose ideology portended chaos. He kept that message alive not only as he confronted the Republicans in Washington, but in a series of stealthy political commercials heralding his reelection bid that started airing in the summer of 1995, nearly a year and a half before the 1996 election.

Therein lies the pointed lesson that Obama might learn from his Democratic predecessor, and use to navigate the political and economic landscape after the midterm. What worked so well for Clinton was to recognize public concern over the leviathan of spending -- and to defend popular social, health, and environmental programs at the same time.

Similarly, Obama can acknowledge the importance of long-term deficit reduction, while challenging the Republicans to show how balance can be achieved without taxing the wealthy whose pockets they invariably protect. The answer is that it can be done only with big tax increases on everyone else and programmatic cutbacks that would raise howls of protest from many Republican constituencies -- starting with the elderly and rural voters that gave them their latest victory.

While the president need not endorse every recommendation of his bipartisan fiscal advisory commission -- dubbed the "Catfood Commission" for its expected endorsement of cuts in Social Security -- he can use their findings to insist that the House Republicans no longer attempt to "repeal arithmetic," as Clinton himself often put it during this campaign.

Against that background, Obama should insist that Rep. Paul Ryan (R-Wisc.), the incoming House Budget committee chair, name the specific programs that he thinks should be cut to finance continuing the Bush tax cuts for the wealthiest one percent.

He should make sure Ryan explains that his plan would not simply cut Medicare costs -- a feature of the health reform bill that Republicans have loudly opposed all year – but would actually abolish Medicare, Medicaid and the Children’s Health Insurance Program altogether and replace those programs with inadequate private vouchers. He should tweak Ryan over the remarkable "bailout" provision in his Social Security proposal, which would leave taxpayers responsible for ensuring that privatized accounts be guaranteed against stock market declines, a vast potential liability that represents a gigantic gift to those same Wall Street houses supposedly hated by the Tea Party.

Perhaps most important, the president should ask Ryan to outline his plan for a 23 percent value-added tax -- the equivalent of a national sales tax -- while cutting taxes to historic lows for the very top brackets. He should question how the Ryan plan will reduce the deficit, when experts say it will actually make matters much worse. And he can point out that his own tax cuts, which were part of the stimulus package, were far more broad-based and fair.

By emphasizing those issues in the context of a budget-balancing debate, Obama can underline contradictions between the Tea Party radicals and the Republican establishment. By doing so, he may even tempt the Tea Party to overreach for another government shutdown, even though John Boehner (R-Ohio) , the incoming House Speaker, has vowed not to step into that trap again.

Perhaps he won’t -- and perhaps he won’t be pushed by the Tea Party. But Obama should nevertheless seek to draw contrasts at every step, using his rhetorical gifts to outline the extremist Republican policies that an overwrought and furious electorate never meant to endorse. If he can competently expose what is behind the false promises of his Congressional opponents -- who remain considerably less popular than he is -- then the fickle independents will start to turn away from them, the enthusiasm gap will shrink, and he will have taken the first step toward reelection.