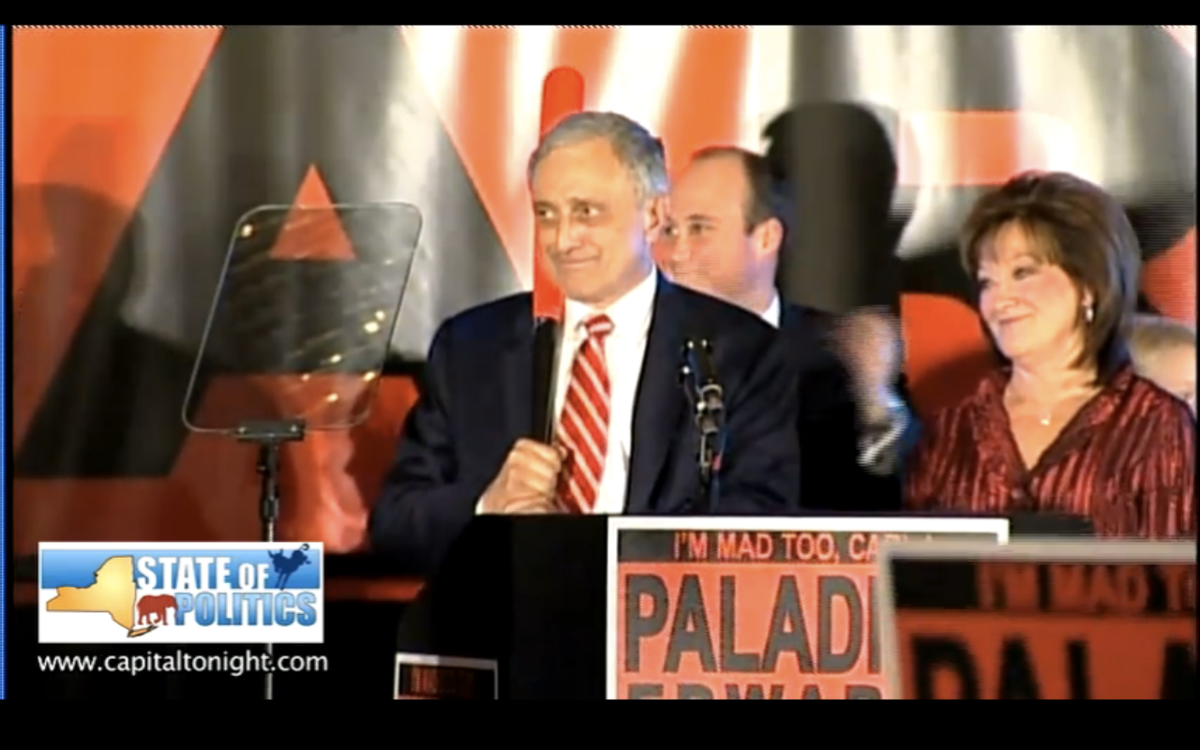 Most election night speeches from winning and losing candidates follow a simple, bland formula. But occasionally, for reasons good or bad, there's a surprise. Tuesday night produced a few of them, which we recall here.

Yarmuth took his surprising win -- as an incumbent Dem from a GOP-friendly Kentucky district, he was widely considered a goner -- as an opportunity to deliver one of the most passionate and generous speeches of the evening. In a campaign that saw many House Democrats sell out Nancy Pelosi (with her blessing!) in an attempt to appeal to right-leaning voters, Yarmuth was happy to stand by the speaker (granted, it was after the polls closed):

"I almost wish there were another podium here tonight, because I feel like Nancy Pelosi has been in this campaign the whole time. And Nancy ought to take a victory lap with me. And maybe President Obama as well. The disservice and disrespect that has been leveled on them has been so outrageous and so unjustified that it makes me really fear for this country. When you have two people who work every day to make life better for every American and they put up with the nonsense … [I]t’s not only unjustified, it’s un-American."

McMahon, the WWE executive who spent over $40 million on her own campaign, suffered a solid defeat. The general tone of her aggressive campaign attacks on Richard Blumenthal might have led viewers to expect a bitter concession; however, her performance was surprisingly classy. On a night when platitudes about "Pennsylvanians," "Nevadans" and "the people of Delaware" largely came across as tinned, her profession of "love" for the people of her state sounded genuine. And perhaps most significant, in a year of rabid partisanship, she was one of the only losing candidates to insist that her followers transfer their support to a victorious rival, projecting her voice over a booing crowd to say: "Each of us, because we [carry] a love for this state and for our country, in our hearts, we are all going to be supportive of our newly elected officials. Because we want them all to succeed; because if they succeed, we succeed."

With his three-term run in the Senate coming to an involuntary end, Feingold's concession speech was short and sweet. "Being your senator has been the greatest honor of my life," he told a disappointed crowd, before offering a quote from Bob Dylan's "Mississippi": "But my heart is not weary, it's light and it's free/I've got nothing but affection for those who've sailed with me."

Strictly speaking, Fiorina's speech to supporters last night was not a "concession," since she didn't actually concede. Though every network had already called the race in favor of Barbara Boxer by the time Fiorina took the stage, the Republican still told an audience in Irvine that she and Boxer were in a "dead heat tie." In a performance entirely consistent with the snarky tone of Fiorina's television ads (not to mention the "sooo yesterday" jab at Boxer's hairstyle that an open microphone picked up earlier this year), she said of those who had called the race for Boxer: "Maybe that was probably not a smart thing to do." Words she's probably regretting right about now.

No one with any knowledge of the Paladino campaign could have been surprised by the eccentric nature of his concession speech. Brandishing an orange baseball bat, "Crazy Carl" issued his victorious opponent, Andrew Cuomo, a bizarre threat:

"I have a message for Andrew Cuomo, the next governor of New York. I've always said my baseball bat is a metaphor for the people, who want to take their government back. But this isn't my bat, after all. As our next governor, you can grab this handle, and bring the people with you to Albany. Or you can leave it untouched, and run the risk of having it wielded against you. Because make no mistake, you have not heard the last of Carl Paladino."

One of the earliest concessions of the night, O'Donnell's speech began on a decidedly positive note. "We have won," she announced, "because the Delaware political system will never be the same." (This apparently confused O'Donnell's brother, who could be heard remarking, "We won, did I miss something?") Soon, though, O'Donnell was lecturing the candidate who defeated her (by 16 points), Chris Coons, about his responsibilities in the years ahead. Among other things, O'Donnell said she had already asked Coons to watch a 30-minute infomercial produced by her campaign. "We can only hope and pray that he chooses to go against his party leadership and do what's right for the people of Delaware," she said.