Is the Twitter "#ihadanabortion" trend effective empowerment or needless provocation? 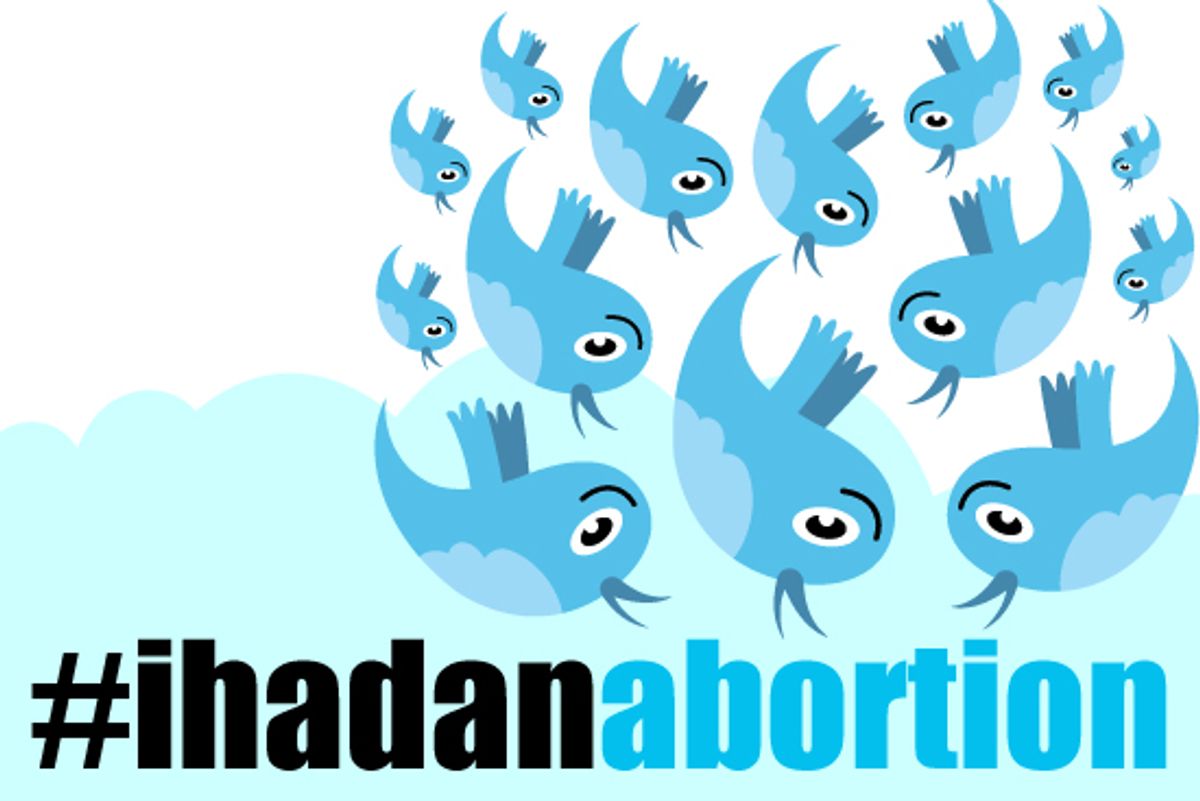 Women are taking to Twitter with a blunt statement of fact: "I had an abortion." In fact, so many are tweeting about their experience that the hashtag "#ihadanabortion" began trending on the site yesterday. It all started with a tweet from @IAmDrTiller: "Time for us to come out. Who's had an abortion? Show antis we're not intimidated by scare tactics. Use: #ihadanabortion." The responses came streaming in:

I've had an abortion. It was not an easy decision, but it was the best one for me. #ihadanabortion

Almost half my life ago, #ihadanabortion. I'm not sorry. I've never been sorry. I will never be sorry. Just very, very grateful.

Yep, #IHADANABORTION.. more than one, now that I am ready I am now 7 months pregnant w/ my 2nd child...my body, my decision!

Those who are ANTI-choice shd B glad #ihadanabortion. I went on to finish college, support myself, marry ... have 2 honor students. Nice, huh?

#IHadAnAbortion @ 17 ... no one helped much; every1 tried to protect the dude's reputation. Yuk. Grateful I had the option. I vote #prochoice.

Others tweeted their support or said things along the lines of "I haven't had an abortion, but I would if I got pregnant." There are surprisingly few anti-choice tweets and, for the most part, the thread feels like a small, intimate conversation -- so much so that I feel trepidation writing about it. That's the whole point, though -- to take this private conversation public, to scrub the "a-word" of stigma and shame. This is part of a long tradition of feminist consciousness-raising, it's just that the medium has changed.

In the documentary "I Had an Abortion," third-wave feminist Jennifer Baumgardner interviewed 20 women, including Gloria Steinem, about their decision to terminate their pregnancies. She also made t-shirts bearing the film's title and, as I wrote about with mixed feelings a few years back, she later started selling "I was raped" tees. Just as always, not all feminists or pro-choicers agree with the concept. "Not sure what the #ihadanabortion hashtag is meant to accomplish," one woman tweeted. "Pro-choice is one thing but this just seems needlessly provocative." In response, someone wrote: "Why is saying #ihadanabortion 'provocative?' I had my wisdom teeth out. Is that needlessly provocative? Or 'i had a baby at 15?'No?"

It seems silly to argue over whether tweeting about your abortion is provocative; of course it is, and the point is to make it less so. The real question is whether or not the #ihadanabortion thread is an effective step in that direction. There is part of me that bristles at the idea of abortion or rape being reduced to an edgy t-shirt slogan or a trending Twitter hashtag -- because the complexity of women's varying experiences is lost. But, you know what? Political slogans are not about nuance, and after Tuesday's election we're especially in need of some bold rhetoric.