Tuesday's election wasn't a revolution. It was a reversion 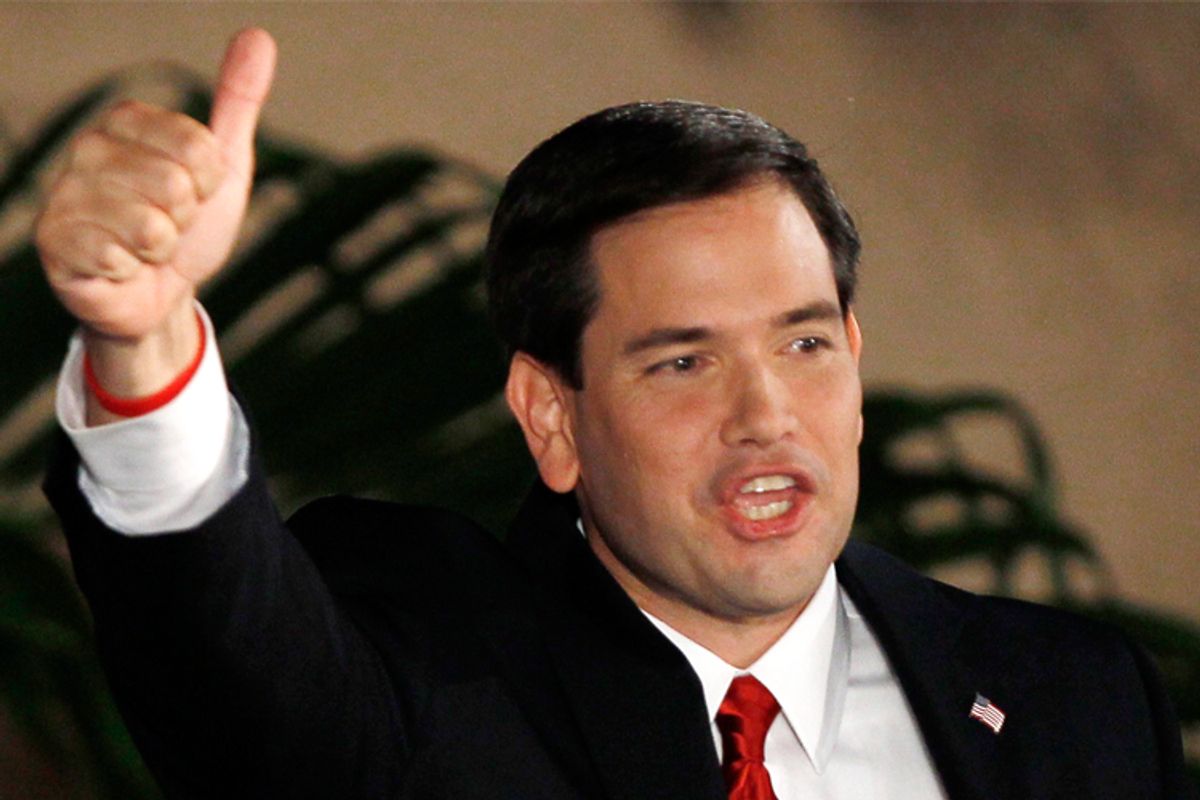 So, this endless, messy, nasty, over-analyzed, and overly expensive election season is finally finished. And, after all the hoopla, and despite all of the big promises of incoming Speaker John Boehner, we’re heading not for decisive GOP governance but for stalemate -- again. One house Republican, the other Democrat, with a president left unable to pursue his more grandiose domestic agenda but perfectly able to marshal his forces to prevent the Republicans from enacting theirs.

There's a lot of talk of the "revolutionary" nature of the Republican victory in the House, and only a fool would deny that the GOP did very, very well in this election. Nearly one-quarter of all Democratic members of Congress lost their seats, while the GOP picked up Senate seats and won a number of important governors’ races, too.

But if you dig deeper and look at where the GOP won and by what numbers, it’s actually rather similar to what the House looked like 10 years ago; the coasts are still blue, most of the heartland is red, the big cities are blue, the suburbs and rural counties overwhelmingly red. In Iowa, judges who supported gay marriage in judicial rulings were hammered at the polls -- but that’s not new. The wedge issues of the culture wars have impacted elections for decades at this point.

This isn’t a revolution; in many ways it’s a reversion -- to the political landscape of the late 1990s and the early 2000s. It’s an amnesiac election, an expression of rage at the ongoing economic crisis rather than a national endorsement of specific GOP policies. In some ways, it’s a continuation of trends in the 2008 election, in which large numbers of independents took a chance on Obama, not because they’d suddenly become liberal but because they wanted "anyone not from the White House's party" in charge. Those independents are still rooting around for newness.

And when one looks at participation rates, the energized right that turned out to vote is quite similar numerically to the energized right from 1994 to 2000. Then, of course, this energized right was termed "social conservative," "evangelical" or "born again." Today, they’re termed "Tea Party supporters." My sense is there’s a large, though not complete, overlap between the two groups, especially in states like Florida and Colorado, with strong, and well-organized, evangelical communities.

In a lousy economy, with mounting voter frustration at the inadequacies of the country’s political institutions to meet the towering challenges of the moment, Pelosi’s new guard, especially the Blue Dogs who made inroads into the South and rural Midwest in the 2004, 2006 and 2008 cycles were almost entirely swept away. But most of the older guard remains -- which, paradoxically, means that the Democratic Party in the House is more cohesive (albeit older) than it was while in the majority. Yes, they won’t be able to initiate legislation, but they’ll be in at least as strong a position to block, or to amend, legislation as the GOP has been over the last few years. And, add to that the fact that the Senate, and thus control of the Senate committees, remains Democratic, and there’s an awful lot of room for the Democrats to push an increasingly extreme GOP back into the political center. The alternative is for governmental stalemate, which, as the GOP leadership knows all too well, didn’t do them any good in the mid-1990s, when they were attempting to take down President Clinton.

In the Senate races, despite the sweep toward the GOP around much of the country, the Republicans failed where they needed most to succeed. They eked out narrow victories in Pennsylvania and Illinois, which embarrass the Democrats but don’t do much beyond that. But they didn’t pick up West Virginia. And they fell short in their attempts to turn Democratic Senate seats in the West red, largely because, with their increasingly xenophobic, and sometimes racially offensive, rhetoric around immigration and the border, they failed to attract large numbers of Hispanics to their cause. And, since Hispanics are the biggest growth group in the West, that, in the long-run, could be a big problem for the party. In California, billionaire GOP candidates, who poured vast amounts of their individual wealth into the campaigns, were trounced in both the governor’s race and the Senate race -- a contest in which Carly Fiorina went out of her way to align herself with the Tea Party.

In some ways, one of the election’s unsung losers is actually South Carolina Sen. Jim DeMint, who had essentially positioned himself as a kingmaker pushing conservative GOP senate candidates against his own party’s preferred nominees. Sure, he might be able to expand his conservative caucus in the Senate by five or six members (garnering the new GOP senator from Utah, for example); but he won’t be able to work behind the scenes to determine committee chairs and distribute true power on Capitol Hill.

In fact, for all the bloviating, and for all the ink spilled about a Tea Party surge, most of the Tea Party favorites running for state office underperformed. The exceptions were South Carolina, where practically anyone with the Republican Party’s backing would have won, Pennsylvania, Florida and Kentucky -- and in Rand Paul’s case, in particular, while he enthusiastically embraces the Tea Party label, he’s actually a libertarian intellectual of a far different, far more complex, stripe than the Christine O’Donnells and Sharron Angles of the world. But O’Donnell herself was trounced. Angle somehow managed to lose to the lethargic, uninspiring Harry Reid, who is as good an example of a bland Washington insider as one could imagine. In Alaska, the Tea Party seems to have been undone by the write-in candidacy of Sen. Lisa Murkowski, whom they thought they’d seen off in the primaries. And in Colorado, Tom Tancredo, a Tea Party darling, lost the gubernatorial race to John Hickenlooper, who spent years establishing truly progressive bona fides while mayor of Denver. And Democrat Michael Bennet, the state's appointed Democratic incumbent, managed to withstand a fierce challenge from Ken Buck.

In fact, the deeper lesson in these races might well be that while the Tea Party and the GOP succeeded brilliantly in forming a marriage of convenience at a local level, winning small congressional districts, they were far less successful when they attempted to forge bigger alliances over larger terrain. At a state level, where candidates have to appeal to urban voters as well as suburban and rural voters, those hybrid conservative insurgents-cum-GOPers didn’t do so well, costing the GOP their chance to take the Senate.

And that’s where Obama and his campaign team -- who proved in 2008 both to be strong counter-punchers and also sophisticated long-term strategists -- have an opportunity. In the Senate, in particular, there’s a GOP civil war waiting to be stoked here, one that makes their appeal in larger-scale elections far less potent than their local appeal. When turnouts increase, as they always do for the presidential elections compared with midterms, Obama has a chance to again appeal to moderate and progressive voters who sat out the vote in 2010 but won’t look kindly on a Republican-Tea Party alliance during presidential season.

Tied in with this is the resurgence of Yankee Republicans, in states such as New Hampshire and New York, and of GOPers-turned-independent candidates such as Lincoln Chaffee, who won election as governor of Rhode Island as an independent. For the Democratic president, this isn’t actually a bad thing. It reinjects a moderate element into the GOP at a national level that’s been sorely lacking in recent years. And it provides an opening to President Obama to look for allies on that moderate Republican wing who might be uncomfortable with the more conservative tilt of their Republican colleagues and might be willing to help the president advance at least some of his social and economic policy priorities. For a man who ran for president on a platform of consensus-building, that presents something of an opportunity amid his party’s wreckage.

Of course, an awful lot of progressive priorities will be shelved in the coming months. And, despite Obama’s temperamental aversion to "going small-bore," in some ways he’s going to have little choice but to emulate Clinton’s move to the center following the 1994 elections. But it’s too early to write obituaries on the Obama presidency.

Whenever Obama has suffered a serious defeat at the polls -- be it his 2000 thumping during the primary season when he challenged Rep. Bobby Rush or the setbacks he faced during the 2008 presidential primaries -- he has emerged stronger from the experience. He learns well, both from his own mistakes and from watching his political opponents in action. On the ropes, Obama’s actually a better fighter than he is in the center of the ring. He’s always performed better when the chips are down. And, confident in his own judgment, he’s always exhibited more serenity under pressure than do most politicians and most of his own political advisors.

He’ll need all of these skills, and more, in the months and years to come. He’s suffered a beating. Now he has to show that he can learn, that he can listen, and, also, that he can fight to preserve as much of his agenda as possible.