I thought I was a culinary hotshot when I took a job cooking for a large church. Then I got my own dose of reality 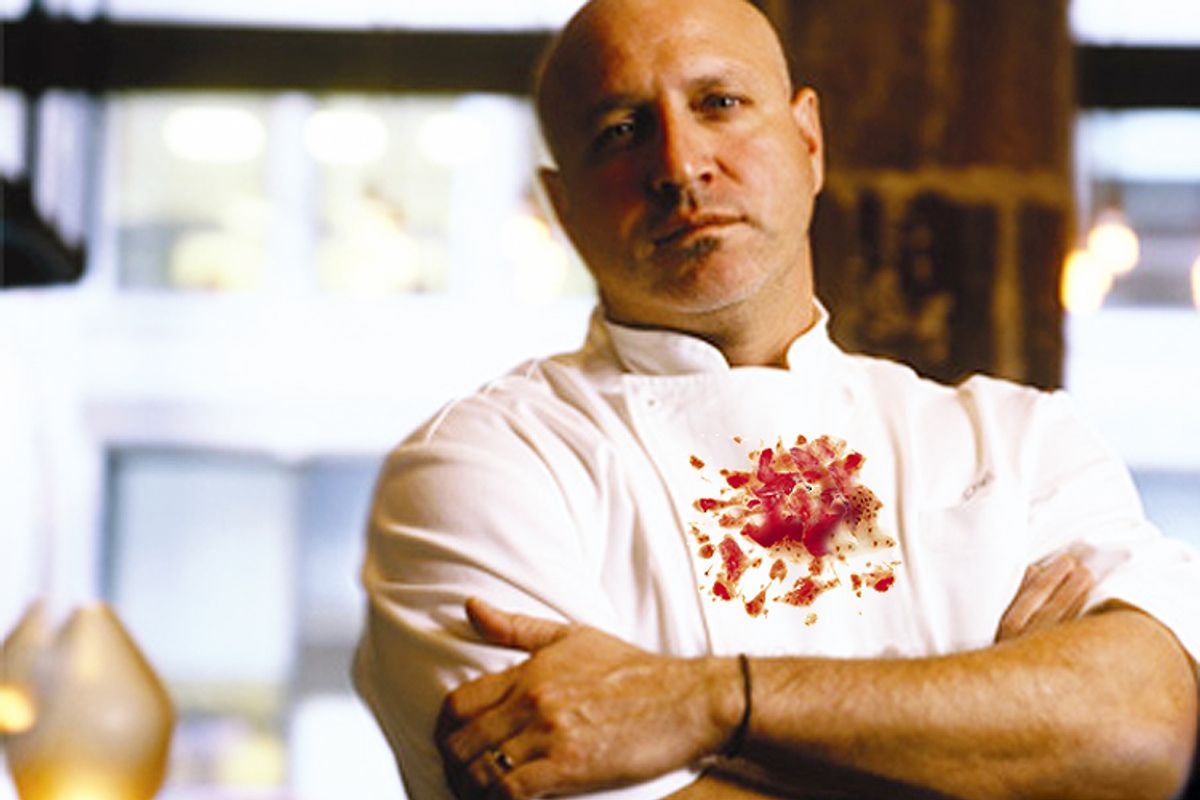 As of today, I have had my job cooking at a large Protestant church for five months. I had imagined it as a kind of "Top Chef: Church." In reality it tends to be more like a combination of "Upstairs, Downstairs" and some kind of circus in which animals are replaced with small children and the high-wire is represented by gigantic pots of boiling soup. I still love it, I still look forward to going in, but there is very little preparation of truffle-scented foam.

When I took this job, I was at a point in my life as a home cook that allowed me to watch "Top Chef," "Hell's Kitchen" and "Iron Chef" with a certain smug and informed confidence. It was, for me, like watching a sport that I could actually play.

"He's going to go for a sous vide!" I would announce to my spectacularly uninterested family.

"Those scallops are overcooked -- I can tell from here!"

I knew the secrets of roux that didn't taste raw and flour-y, how to poach tender and flavorful chicken, and -- my equivalent of the Hail Mary pass -- how to make croissants, doughnuts and bagels from scratch. I could party with a spice rack like nobody's business and present a finished product that spoke of Mumbai, Phuket or Puglia. In the same way that I had lived my childhood years as Dorothy Gale, Jo March and Anne Shirley, I was hitting middle age as Fantasy Chef, in the mold of Anthony Bourdain. Not French and effete, my secret self had tattoos, a pierced nose, Batali-bright cooking shoes, a foul mouth and a favorite late-night watering hole that served marrow and tripe soup.

As it turns out, I have not lulled so much as a single snail to eternal rest in a bath of garlic butter. There is no sous vide machine in the church basement, nor is there much call for truffle oil, Hawaiian sea salt, lemongrass or chutney. I cook for families, and not the kind of families that live in Manhattan and take their precocious children out for dim sum on Sundays. I am cooking for children who eat nothing "mixed" or otherwise arcane, for elderly folk who can't tolerate spice like they used to, and everyone in the middle. I have a tight budget. I am, despite my fantasies, completely untrained, and I sometimes make awful mistakes based on a combination of optimism and ignorance. To wit: The scalloped potatoes that failed to "gel" and turned into potato soup, the grilled cheese for 100 people on the griddle that ranged from "torched" to "touchable" in the space of a square inch, and the broccoli cheddar soup that doomed four pots to spend eternity wearing an immobile scrim of vulcanized dairy products.

I am learning, all the time, but it is clear that the work I do is not like that of a restaurant chef working on a line and searing pan after pan of perfect quail breasts; it is far closer to catering or cooking for a school, hospital or all-you-can-eat establishment. Quantities are big, food has to be able to endure the steam table, and the lack of individual choice for diners means hitting the "happy medium" every time. I am not Anthony Bourdain; I am Chris Farley in a hairnet. I work with volunteers who are concerned that I will trigger the apocalypse by putting salad dressing on the table in its original containers, and I cook for funerals, cake auctions, parenting classes and women's club teas. I know who likes Earl Grey, and which kids don't eat any vegetables.

Last week there was a line-dancing class for senior citizens, which required me to hear "Boot Scootin' Boogie" approximately 62 times, and a tornado warning that brought a parade of sleep-pinked babies from the second floor preschool into my basement to ride out the storm. Yesterday, my kitchen was the hub of a voting precinct and I spent the day dodging volunteers who wandered in to get a snack, or to chat with me despite those white cords hanging out of  my ears, and the fact that I was juggling 350-degree pans the size of Rhode Island. It is a circus of humanity, leaving me with a head full of dancing, white-haired ladies in matching sweat suits and ironically detached poll challengers wiping Frito dust on their tweed jackets.

There is no swearing (well, not much), no tattoo, no piercings and no after-hours drinking in this cooking life. There are spectacular failures, retorts bitten back, and the odd, impotent rage when things don't go according to plan. I'm thinking that's all stuff that every working person deals with at one time or another. On the other hand, the time-worn, broad and generous hand of fate, I get to put on a show at least once a week, create something from nothing, get a round of applause, and come home rich with stories, experiences and satisfaction. If I were really on "Top Chef," I would have been instructed to "pack my knives and go" the first time the scalloped potatoes left the kitchen in soup bowls. In my kitchen, the glass may be full of Church Lady Punch instead of Malbec, but it is always, always half-full.