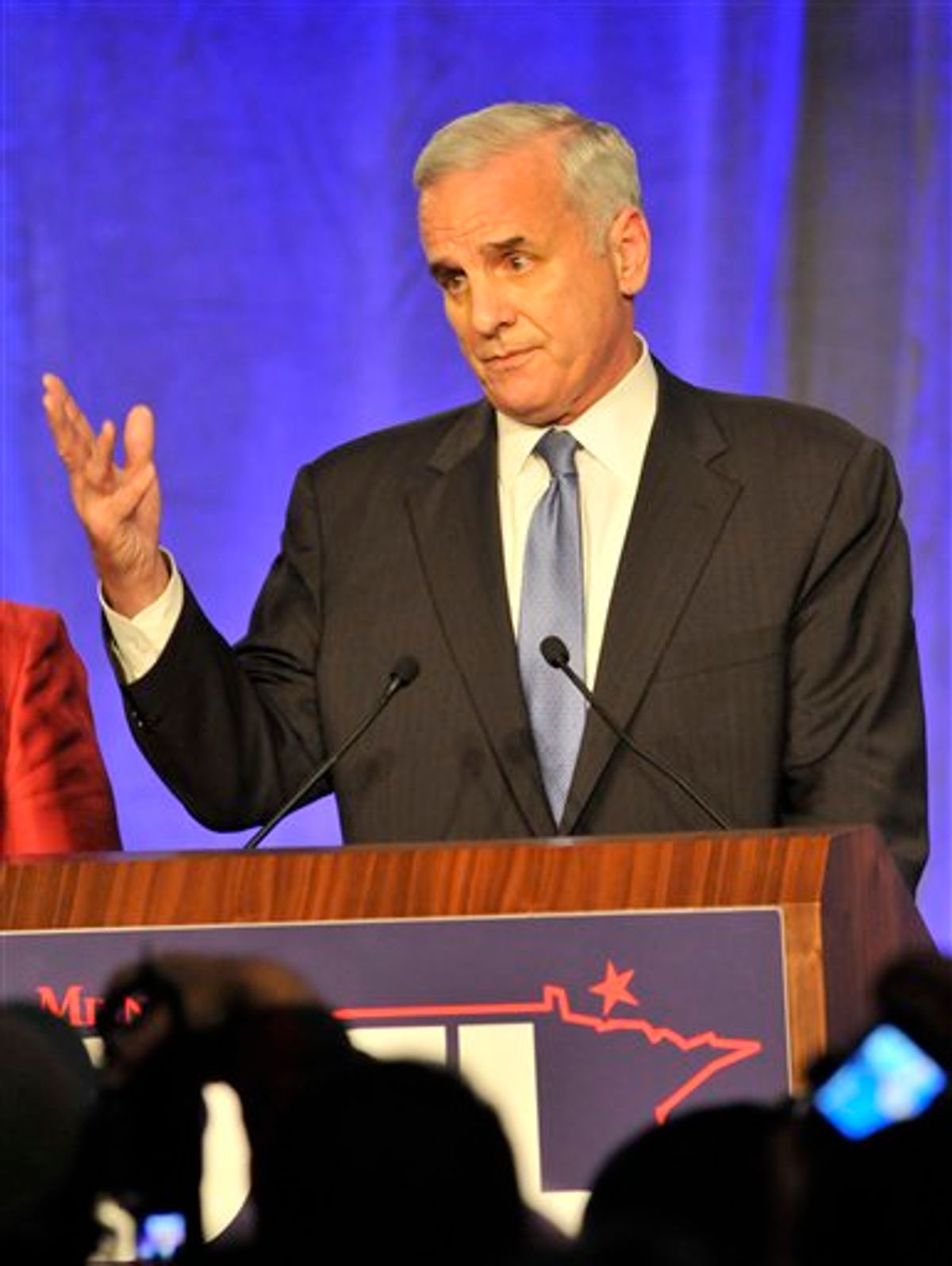 Here's how bad it is for Minnesota Democrats: They could wind up losing, even in a race they might have won.

A potential recount in Minnesota's race for governor might eventually crown Democrat Mark Dayton the winner but drag on so long that the Legislature convenes in January with retiring GOP Gov. Tim Pawlenty staying in office.

Democrats fear that Republicans newly in charge of both chambers will combine with Pawlenty to push through massive spending cuts and pursue long-held goals on things like banning gay marriage, enacting photo ID for voters and expanded gambling.

It's a scenario that could also benefit Pawlenty, who had planned to spend January rolling out his memoir and deciding whether to run for president. Staying in office, especially with the backdrop of a nationally watched recount, would endear him to Republicans and give him a highly visible perch to polish his credentials as a fiscal watchdog.

"Any of my personal plans or concerns are secondary to the fact I have a duty and responsibility to fulfill under the constitution," Pawlenty told The Associated Press in an interview. "I'm not going to walk away from that."

Both parties were girding for months of battle over the governor's race, which would be an unpleasant repeat of the 2008 U.S. Senate race between Republican Sen. Norm Coleman and Democrat Al Franken. That took seven months of recounting and litigation before Franken emerged the winner, and most Minnesotans hated every minute of it.

"It's like, oh my lord, not again," said Minneapolis resident Devin Clarkson, 28, a nonprofit case manager who backed Dayton. "It's disheartening, and I guess it shows Minnesota has become a really divided state in its politics."

Dayton, a former U.S. senator who quit the chamber in 2006 after a single term, led Republican Tom Emmer in unofficial final returns by 8,855 votes out of about 2.1 million cast -- a difference of 0.42 percent. The margin will trigger a recount unless the official canvass Nov. 23 pushes Dayton's lead past half a percentage point.

Dayton said it would be "presumptive" to declare victory. He said a recount shouldn't be political and that voters should expect it to wrap up by late November or early December -- without drawn-out litigation.

"I don't think the people of Minnesota will stand for it. And they shouldn't," he said.

Emmer said in a statement he wanted to ensure "all valid votes are counted and the will of the voters is met."

Democrats pointed out that Dayton's lead was significantly larger than the margin that separated Franken and Coleman.

"Right now, Mark Dayton is significantly north of 8,000 votes, which to my mind looks like a landslide," said David Lillehaug, a former U.S. attorney and a member of Franken's recount team who conferred with state Democratic officials Wednesday. "Let's remember that in 2008, you had a shift of only about 500 votes between the day after the election and the end of the process. There's no precedent in Minnesota to think anything close to 8,000 votes could be flipped. My message is, this is not 2008."

Republicans vowed to "turn over every stone" to help Emmer make up his deficit. With memories fresh of Coleman's loss, GOP chairman Tony Sutton promised an aggressive fight.

"We're not going to get rolled this time," Sutton said. He called it unusual that Emmer trailed even as Republicans knocked off an 18-term Democratic member of Congress and took control of both houses of the Legislature, a first since state lawmakers started organizing by political party in 1972.

Much lies in the balance. With the Republican legislative takeover, Dayton is the Democrats' only hope of preventing likely deep cuts to state spending sought by Emmer to head off a looming budget deficit of $5.8 billion for 2011-12. If Republicans control both the legislative and executive branches, they could maximize political gain in the upcoming process by which legislative and congressional district lines get redrawn.

An extended Pawlenty term could have financial ramifications for the state. In May, Pawlenty struck a deal with legislative Democrats that gave his successor until Jan. 15 to decide whether the state should accept more than $1 billion tied to the federal health care law in exchange for expanded medical coverage for the poor. Pawlenty opposed the health care bill and previously refused the money.

Dayton said Wednesday that accepting it would be one of his first acts as governor and that the recount should be able to move quickly enough so that the next governor is sworn in on Jan. 3.

Secretary of State Mark Ritchie -- a Democrat who was re-elected Tuesday night despite GOP criticisms of his handling of the Senate recount -- said Wednesday's election was "extremely smooth" and without irregularities.

Minneapolis resident John H. Owens Jr., a 59-year-old retired military veteran, said he voted for Dayton but considered all the candidates "good men" who deserve a full and thorough vote count even if it takes some time. But he quickly added he hoped a recount would not bog down in trivialities.

"Just don't start telling me that the little mark on this ballot was a millionth of an inch outside the circle so this one doesn't count," Owens said. "Let's not do that again."