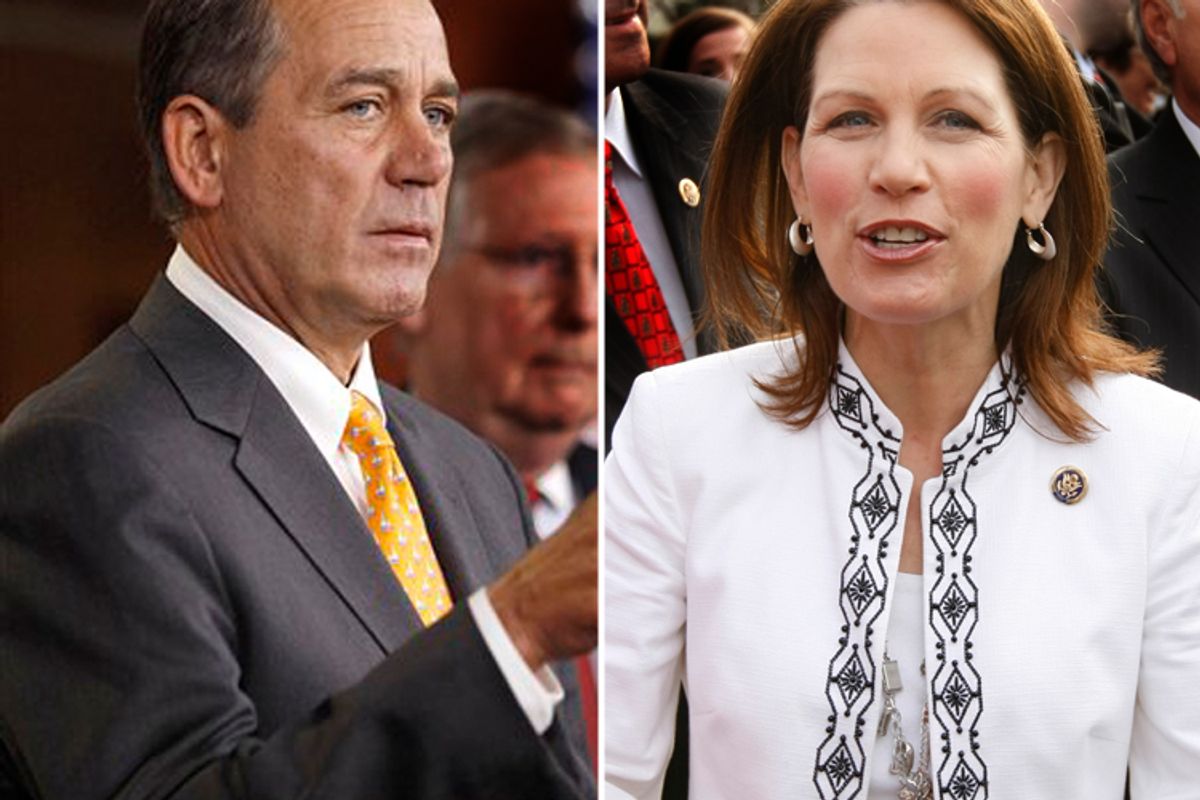 Minnesota Congresswoman Michele Bachmann is pretty sure that she was an integral part of the Republican victory at the polls. And so she'd like to be rewarded for her efforts. Bachmann seeks a House leadership position. Specifically, she wants to be the chairwoman of the House Republican Conference -- the fourth-ranking Republican leadership post in the House, and a position once held by John Boehner, Dick Cheney, and Jack Kemp. There's just one slight problem: She's a prominent national Republican solely because she says insane things on television, not because of her leadership skills or policy chops.

This presents a slight problem for House leadership. They like the more "serious" Jeb Hensarling (R-Tex.) for the position. But the activist base loves Bachmann. And unlike Democrats, the GOP doesn't take any perverse pleasure in punishing its base. (And their base doesn't suck it up and take it when they're denied what they want.)

“Jeb's economic expertise and strong ability to communicate are what we need in our conference chairman to articulate our unified commitment to get our country back on track,” Ryan wrote in the letter. “This position requires someone who has a command of these issues and has a history of successfully debating them.”

But Bachmann has her own letter!

Bachmann, according to the letter obtained by POLITICO, is making the case that she brings “strong principled conservative values, a proven level of experience, effectiveness with our friends in the local and national media, and an energetic national constituency that reflects the results of Tuesday night.”

“It is important that our conference demonstrate to the people who sent us here that their concerns will be tirelessly advanced at the table of leadership,” she wrote.

Presumptive Speaker John Boehner hasn't endorsed anyone, but the rest of the leadership is lining up behind Hensarling.

Red State's Erick Erickson, a man who will soon be spending a lot of time selling the GOP's internet base on decisions made by the sell-out leadership, is currently endorsing a compromise:

I think having Jeb Hensarling as Conference Chair and Michelle Bachmann as Vice Chair would be a powerful duo. Hensarling is a very substantive policy guy. Michelle Bachmann gave up campaigning for herself to go all over the country for Republicans this year. She deserves a seat at the table.

I'd be shocked if the eventual resolution of this little fight doesn't look more or less like that.

Bachmann, meanwhile, is in the middle of one of her horrible "thing she heard on the internet" media tours, where she repeats dubious claims made by Free Republic commenters (it's all part of the process whereby idiotic untruths bubble up from the imaginations of fevered conspiracy theorists to prominent media figures on talk radio and Fox). This time it's the story of how Barack Obama's trip to India will cost "$200 million per day," which is not true.