Fish farms might be the key to sustainable seafood, but visiting one made me think twice about the lunch I wanted 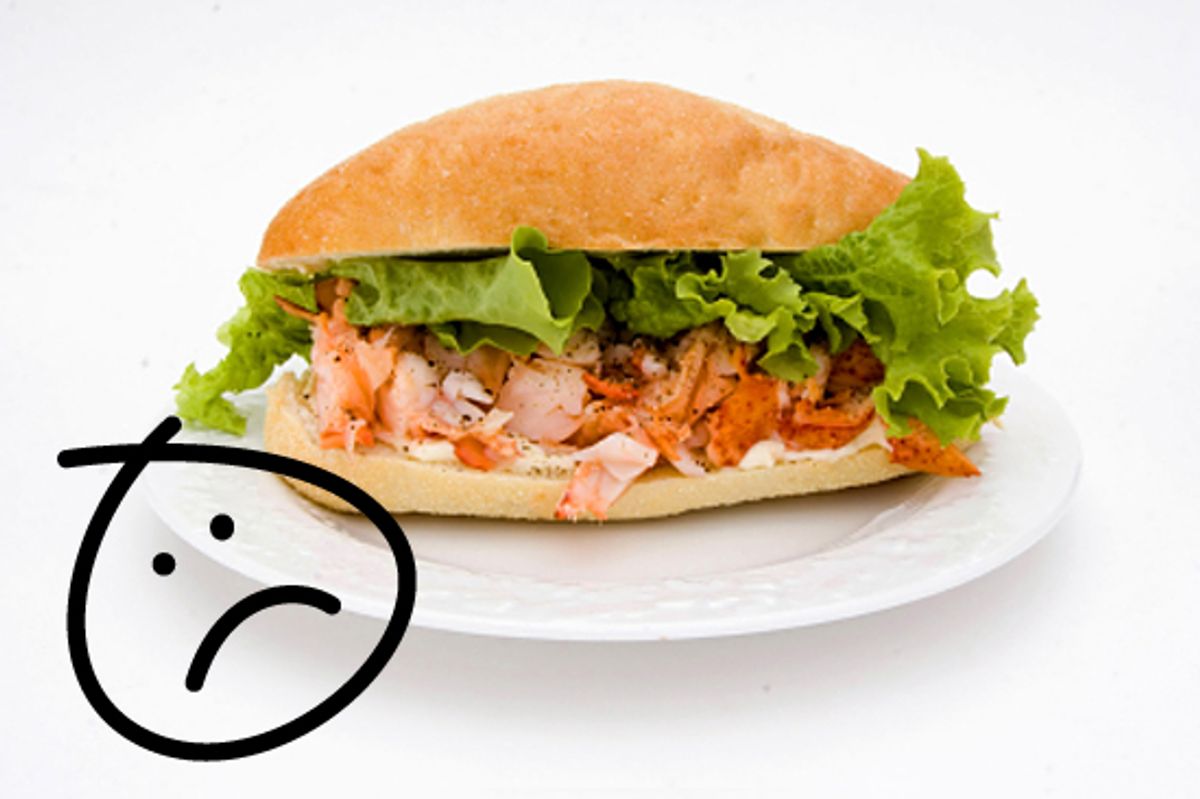 On the tip of Long Island with a fall chill in the air, I was still looking to live the summer, to breathe in ocean spray and indulge in sweet lobster meat, dressed with mayo and piled onto a soft, buttery roll. And, at first, the acclaimed lobster roll at the Fish Farm seemed like exactly what I wanted.

But the spartanly named Fish Farm did not exactly match my romantic seaside vision, and my afternoon was not to be as simple as munching on a tasty sandwich. We drove up a dirt road and saw a collection of dilapidated, rusty buildings and enormous outdoor tanks. I was not expecting to see pottery all around, wildflowers growing out of every nook and cranny, a hanging disco ball and, disturbingly, a mannequin's arm sticking out of a pot of soil. "Are they selling fish at a yard sale?" I wondered. Sitting on the eastern tip of the island, in the old fishing town of Montauk, the small restaurant is an annex to an actual fish farm, and this was my first up-close experience with the controversial practice of aquaculture, which, depending on your view, is either a response to humanity's seeming unending hunger for fish or an environmentally disastrous symptom of it.

"Human beings are basically very greedy," said Bob Link, the Fish Farm's director of regulatory affairs. When it comes to seafood, it is hard to argue with that assessment. Commercial fishing has either fully exploited or overexploited more than 75 percent of the world's fisheries. Once overexploited, the fish stock falls below the size that would support the long-term yield of the fishery and is in danger of collapse. In other words, commercial fisheries are taking fish out of the ocean faster than fish are able to reproduce.

According to Link, there is a 25 million metric ton shortfall in the supply of seafood needed to meet current rates of consumption, which are only likely to grow. I try to be a conscious consumer, and in efforts to control my own demand, I try to avoid eating salmon and other large, predatory fish, mostly sticking to sardines or other seafood that is considered more abundant. But my choices are, admittedly, not perfect -- I do love a piece of tuna every so often -- so I was curious to learn more about fish farming. Aquaculture, the controlled cultivation of marine life, addresses the supply side by offering an alternative to commercial fishing, which continues to harvest ever dwindling amounts of seafood. Currently, farmed fish accounts for nearly half of the seafood Americans eat, according to the National Oceanic and Atmospheric Administration (NOAA).

Back in the 1970s, Bob and Marie Valenti, who both hold Ph.D.s in marine biology, witnessed how the shores of Long Island were being stripped of their once abundant and diverse stocks of seafood. They started the Fish Farm (formally known as Multi Aquaculture Systems) in 1979 as a way to take pressure off of local wild fisheries, predominantly raising striped bass, a species local to the area. "In a perfect world, we wouldn't have to do this," said Link. After listening to his appraisal of man's relationship with seafood, I began to think twice about my lunch. Did I really need a lobster roll right now? Of course, I know that one more dead crustacean wouldn't mean the end for the world's marine ecosystems, but it made me wonder if my own trivial desire on a small scale is what adds up to the unwavering human demand for seafood. My choice of lunch was beginning to seem like an unnecessary indulgence.

And aquaculture is not a panacea for exploited fisheries. Controversy surrounds the practice, which some claim is not any more sustainable than commercial fishing. Wild fish are often caught and used to feed farm-raised carnivorous fish such as salmon, resulting in a net loss of fish anyway. In close proximity, farmed fish are more likely to catch diseases and are fed antibiotics. When farmed in open-net pens, the concentrated waste from the fish and antibiotics can affect the surrounding environment. And farmed fish can escape from the pens and compete with local species. Bob Valenti is aware of the controversies but points, for example, to the fact that their main farmed product, striped bass, is native to local waters, so escaped fish don’t unfairly compete with wild fish. (Something that couldn't be said, for instance, of another company’s new genetically modified salmon that grows at twice the natural rate of the fish.) "We're doing the right thing," he says.

That may be so, but on viewing the facilities, it struck me that life on the Fish Farm did not seem all that different from life on a factory farm. About 25 feet in diameter, the circular outdoor pens were filled with brown, murky water. I had to peer in more closely to actually see the tens of thousands of young striped bass swirling in the water. The fish may seem to have a pretty easy life; enclosed tanks and a steady diet of pellets means they never have to worry about predators or food. After several months in the tanks, the fish are moved to larger offshore net pens with tens of thousands of other fish. The pellets are industrially produced, a mix of fish meal and vegetable protein. The feed is also treated with antibiotics to keep the fish disease-free in tight spaces. Looking at the tanks teeming with thousands of fish, I couldn't help being reminded of chickens in crowded cages.

Learning the reality of how most animals are raised for meat in books like "Fast Food Nation" led me to change how much of it I eat and where I get it from. I love hamburgers as much as the next person, but I will pass one up if the beef comes from a cow that was packed into a CAFO -- a concentrated animal feeding operation, the ubiquitous kind of factory farm that I once thought only existed in nightmares. If I do not get a chance to stop by the farmer's market, I will make do with a vegetarian dinner rather than buy meat from a supermarket. If I do not know where my meat comes from or how the animal was raised, I simply prefer not to eat it. While I try not to be didactic about my views, these are the choices I make for myself as a consumer. So if I feel uncomfortable eating factory-raised chicken or beef, why should I feel differently about the fish?

Not all the fish the Fish Farm sells is raised this way. Multi Aquaculture Systems also catches wild seafood, including lobster, that is sent to markets around the world. When Bob Link held up a lobster that he said came off the shores of Montauk, I felt mixed emotions: relief that at least my lunch wouldn’t be coming out of a pen, but lingering guilt since I was still doing my part to strip the seas bare.

But Link was right. I am a human, I am greedy, and I still wanted it. I sat down at the worn picnic tables to enjoy my award-winning lobster roll. Served in a cardboard basket lined with checked red-and-white paper, the sandwich was no-frills. The meat was fresh and sweet, but piled into a supermarket hot dog bun, untoasted and unbuttered. As I ate, the flavor and pleasure felt ... dull. Causing inner turmoil for something that was decidedly not the Holy Grail of lobster rolls, lunch didn't taste nearly as good as it might have.

Michelle Loayza is an editorial fellow at Salon.