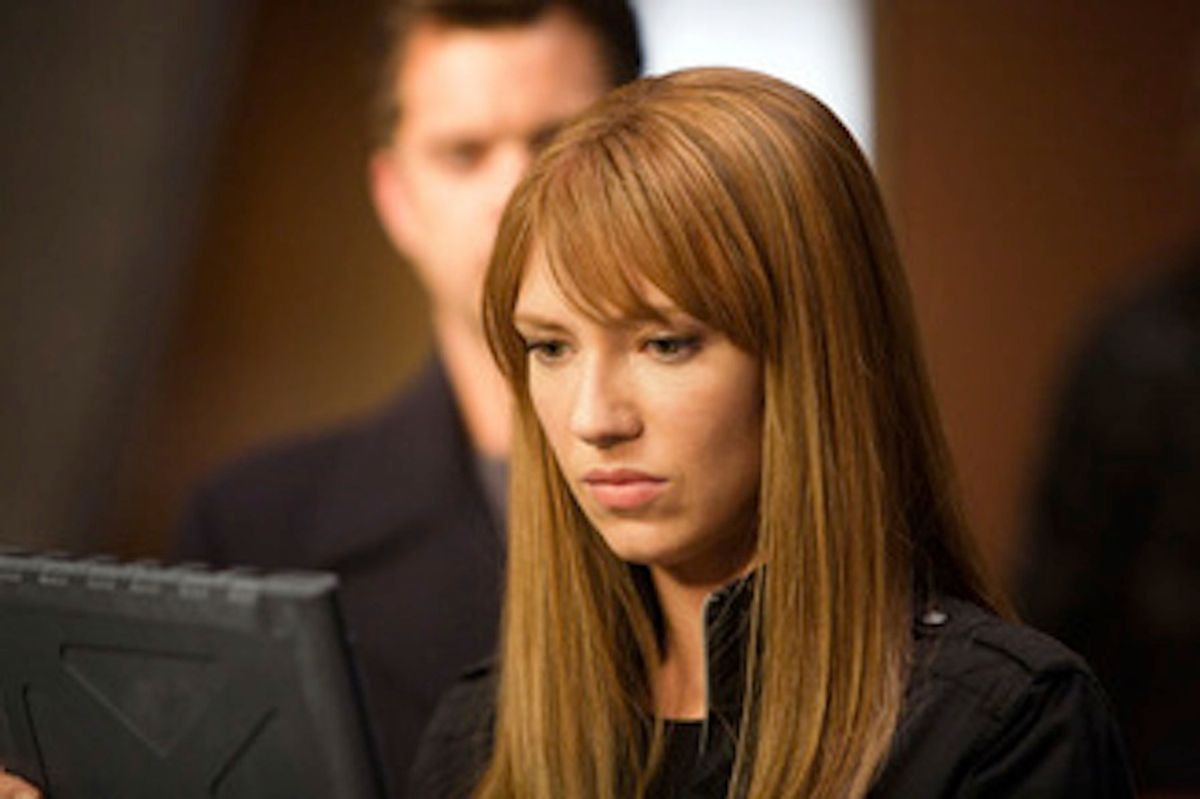 Welcome back to "Fringe" after that one week break. I'd say that I hope you enjoyed the World Series, but judging by the ratings, apparently most of you were watching something else. In that respect, Fringe has a lot in common with baseball. Anyway ... for those of us who still loyally watch the show, we're back this week in Earth-2 with our Olivia.

The "previously on" reminds us that people trapped in the resin that Fringe Division uses to seal up cross-dimensional breaches (substance Amber 31422) have been declared legally dead by the courts in Earth-2. We quickly find out that isn't true, however, as the show opens at a quarantine zone in Brooklyn, where two men free one of the people trapped in amber and successfully revive him. Not so successful, however, is their escape plan, as one of the men (the one who isn't an identical twin to the trapped man) ends up getting trapped behind as the zone reseals with amber almost immediately. The twins (who you might recognize as real life twin brothers Aaron and Shawn Ashmore of "X-men" and "Smallville" fame) run off into the night.

Agent Lincoln Lee is back again and finally healed up from his burn. He, Charlie and Olivia are dispatched to investigate the breach at the quarantine zone. There's some exposition about various events that required quarantine (including video footage of an impressive black hole in the middle of the Central Park lake). The Fringe team quickly realizes that they're dealing with more than just someone trying to steal money or jewelry out of the amber and head off with the face imprint left behind in a chunk of amber.

Meanwhile, Walternate meets Broyles in a bar and discusses the situation. Walternate admits that he is well aware that the people in the amber are alive. Broyles is shocked but, ever the good soldier, accepts Walternate's assertion that freeing the people from quarantine would cause the amber to destabilize. Walternate gives this hilarious "I intend to restore balance to our world" speech that couldn't have been more Emperor Palapatine-ish if he had pulled the hood of his robe up and screamed "Unlimited powerrrrrrr!"

For a such a world-shattering secret, they seem awfully comfortable just chatting about it in public spaces. Later Broyles just strolls up to the team when they return to HQ and tells them about the amber victims still being alive, even though they're in the middle of a crowded room. I mean, I realize that people working in the building probably have clearances, but still ... if your trusted agents weren't even supposed to know, then the random lab techs strolling around probably don't need to know that stuff either.

As the tale of two brothers proceeds, we learn that one of the twins, Joshua Rose, was a bank robber who used some kind of Fringe-esque technology that caused rifts to open each time he used it. The technology described is a rather clever call back to Season 1, Episode 10 ("Safe"), which featured a similar device used to rob banks as well. In any case, eventually Joshua got caught up in the quarantine zone at his final crime scene.

At least that's how it seemed, but in a surprising twist we learn that it was really Matthew, the good twin, who ended up trapped after showing up at the crime scene to try and stop his felonious brother. Joshua assumed his twin's identity while he worked on getting him out. The resolution of the story proceeds as expected -- Fringe team gets closer to discovering the truth and eventually Joshua sacrifices himself by intentionally provoking another quarantine zone so that Matthew can remain free on the outside. It's a fairly pedestrian plot by itself, and the show has certainly given more interesting Monster of the Week stories in the past. It felt like a lot of effort just to be able to cast some rather obvious good twin/bad twin parallels between the brothers and Alt-livia/Olivia. I felt like this story should have had more emotional impact, especially with the reveal that the victims inside the amber are aware and experiencing their last thought on a never-ending loop. But this plot just fell flat for some reason.

What redeems the episode really is the B plot, where Walternate is busy putting phase 3 of his evil plan into place, as he sweet talks Olivia into participating in a series of tests that will help unlock her cross-universe traveling abilities. Olivia agrees, but the minute she's alone, we see that Peter is still haunting Olivia like some kind of wacky sarcastic ghost. Petergeist articulates the doubts Olivia is feeling about her own sense of identity and pushes her to accept that she's not really Earth-2's Alt-livia. She shuts him up by taking a heavy dose of medication.

Olivia is finally ready for the tests to begin. We see that the Tank is back, but a lot nicer looking than the old metal version. Not to keep calling back to Star Wars, but it looks a lot like the tank they put Luke in after he got frostbite on Hoth. In any case, instead of a practical outfit, such as a bathing suit or wetsuit, Olivia is dumped into the water wearing a sheer white dress for some reason. After 4 hours they haven't accomplished anything other than turning Olivia into a giant prune. Eventually Walternate gets impatient orders what sounds like a LOT of psychotropic drugs pushed. It does the trick, as Olivia jumps over to Earth-1, landing in a gift shop somewhere in NYC. She inadvertently gets a cute little boy in trouble after she jumps back, just in time for his mother to find him standing next to the snow globe Olivia shattered.

After Olivia visits Matthew to let him know that she knows his secret, and then assures him that the case is closed, Petergeist pops back up to whisper in her ear again that the reason she let Matthew go is that she sympathized with him. Petergeist rattles off a bunch of facts about Earth-1 that Alt-livia couldn't possibly know, prompting Olivia to rush back to the lab to demand to be put back into the Tank. This is a nice shoutout to Season 1 Olivia, who did the same thing when she was searching for answers about John Scott. This time, she's going in to try and save herself.

Brandon the lab nerd is there and notes that some kind of artificial chemical in her brain activates as she attempts to jump. This is very likely Cortexiphan. Olivia jumps back to the gift shop and confirms what Petergeist has been whispering in her ear -- that the Twin Towers collapsed in Earth-1, that her niece Ella is still alive and is celebrating her 7th birthday. When she slips back to Earth-2, Olivia falsely reports to Walternate that she didn't successfully jump over. Because Olivia is just a terrible liar, though, we can also see that Walternate doesn't really buy that at all.

So, now the stage is set for the next few Earth-2 episodes: Will Olivia find a way to activate her latent abilities on her own before Walternate gets impatient and decides to crack her head open to get at the sweet, sweet Cortexiphan juice inside? Will the sexy specter of Petergeist push Olivia closer to the truth or drive her deeper into what looks like a growing drug addiction?

While I enjoyed the story this week, I can't help but wish that the Earth-2 stories were more focused on the season long arc of Olivia returning home, and less about random one-off Fringe stories of the week. I would have enjoyed this more if they had spent the entire episode just on the B plot. We don't get enough time with Walternate, who could be a much more compelling character if we were allowed to see more of what makes him tick. John Noble is such a tremendous actor -- he's able to imbue Walternate with this incredible sense of lurking malevolence -- that I really wish he got more screen time to show off his stuff.

Similarly, I feel like we're spending a lot of our time spinning our wheels with characters that you know aren't going to be around much longer -- can you really care much about what Charlie or Lincoln are thinking or feeling when you know that eventually the show will have to abandon Earth-2 and merge Olivia back into the Earth-1 plot?

One final observation: if Earth-2 technology is capable of opening rifts, then is it possible that several (if not all) of the events suffered around Earth-2 might not be random, but rather linked to someone using Fringe technology? It bears noting that Walternate states that the first time they used the amber, it was at Harvard Yard. And we all know that a certain mad scientist had a lab there in both realities. It's not much of a stretch to think that Walternate might have caused that particular rift himself while trying to open his own portal to Earth-1.

Summary: If you and your twin brother find yourself trapped in a Cain and Abel type scenario, it pays to know which twin you're supposed to be.