It's the political system, stupid 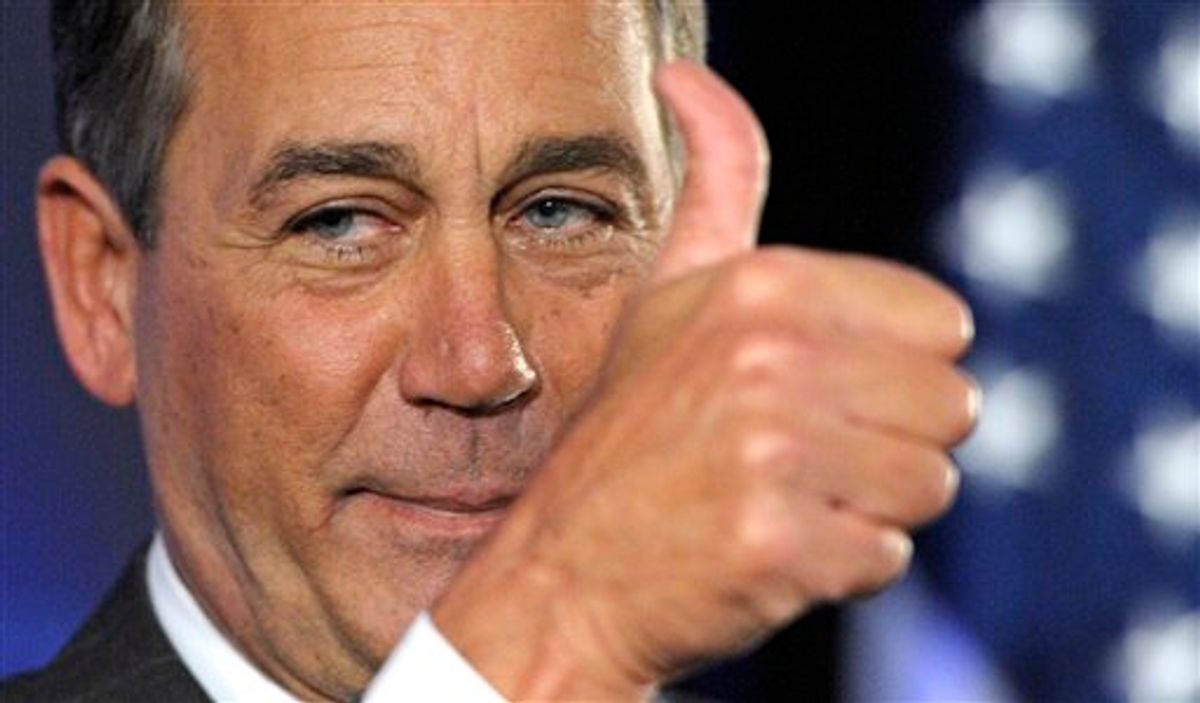 House Republican leader John Boehner of Ohio celebrates the GOP's victory that changes the balance of power in Congress and will likely elevate him to speaker of the House, during an election night gathering hosted by the National Republican Congressional Committee at the Grand Hyatt hotel in Washington, Tuesday, Nov. 2, 2010. (AP Photo/Cliff Owen) (AP)
--

A president who helped corporate interests gut the very proposals he was elected on -- healthcare reform, Wall Street regulation and economic stimulus -- was suddenly berated for being anti-business and for overreaching. An anti-Establishment/anti-corporate/anti-NAFTA/anti-government Tea Party ended up electing to the Senate a congressman's son (Rand Paul), a pharmaceutical lobbyist (Dan Coats), a Bush trade representative (Rob Portman) and a corporate chieftain whose business was propped up by government grants (Ron Johnson). Meanwhile, a country that twice rejected Bush Republicans in favor of Democrats suddenly returned those same Republicans to power.

Yet, as perplexing, demoralizing and insane as all this seems, a clear pattern does exist in the madness.

As I documented in my 2006 book, "Hostile Takeover," our political system has been swallowed whole by moneyed interests -- and whichever party is in power inevitably legislates that reality. Americans have come to fully understand this situation -- and despise it. Thus, as I showed in my 2008 follow-up book, "The Uprising," we are now reflexively drawn to whichever minority party candidates promise the swiftest backlash. Whether the challengers happen to be anti-Bush Democrats or anti-Obama Republicans, America is drawn to these faux rebels even though we implicitly know they will almost certainly become part of the problem once elected.

It's kabuki theater ad absurdum -- and it explains a lot.

For instance, with Democrats embodying the Hostile Takeover right now, the binary dynamic accounts for the recent resurrection of the old conservative populism first pioneered during the 1980s (this, by the way, is the subject of my spring 2011 book, "Back to Our Future").

The Uprising-versus-Hostile Takeover cycle also explains not the end of any particular era -- but the end of political eras as a whole. Whereas clear differences between the parties once created epochal congressional majorities and intractably red and blue states, we now rapidly vacillate between two similarly money-dominated parties in a spastic search for an insurrection that will bring something different.

That, of course, gives us a unified theory of the last three elections. In an America straitjacketed by a two-party system, these contests have been all about voters trying to support any available uprising, irrespective of party labels or even ideology.

Ending this tail-chasing exercise and constructing a truly transformational and results-oriented politics is essential -- but won't be easy because powerful forces are invested in the charade.

Partisan media outlets generate ratings by pretending their respective party's uprising won't be tomorrow's hostile takeover. The political consulting class makes big money from commercials that do the same thing. And a hyper-partisan population divorced from genuine social movements is addicted to believing that if only we wait for the next election, one of the parties -- however corrupt or compromised -- will supposedly bring about "real change."

In that sense, biennial election hype is the opiate of the masses -- an opiate made particularly potent because it preys on the psychology of hope. We desperately want to believe that we can mount a successful uprising. And it's true, we can. But not until we realize that both parties are now part of the hostile takeover we seek to confront.