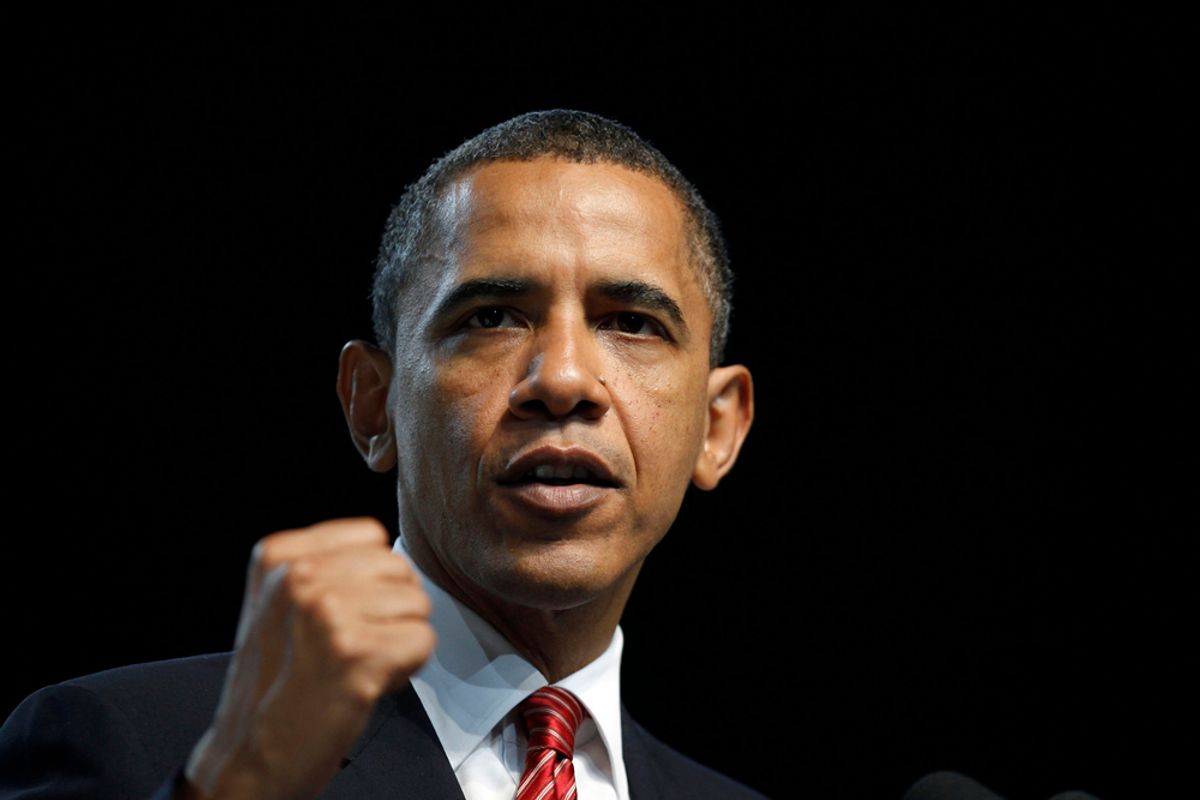 I've written over and over that Barack Obama's fate in 2012 hinges on the state of the economy. If it's clearly improving, he'll be fine; if it's not, he won't. There's nothing revolutionary about this formula, but it pretty much explains the success or failure of  modern presidents in their reelection campaigns.

But after Tuesday night, I'm willing to amend my view. I now believe it's very possible that Barack Obama will be reelected even if the economy has not improved significantly between now and Nov. '12.

This may seem like a curious statement, in light of the midterm "shellacking" Obama's party just endured: The 61 (or more) House seats that Republicans picked up marks the biggest single election gain for any party since 1950, reflecting broad dissatisfaction with the president. Obama's approval ratings are, and have been for more than a year, in shaky territory; if they don't budge -- or if they get worse -- between now and '12, just about every election prediction model available would forecast a defeat.

But Tuesday also demonstrated that, even in a political climate poisoned against the Democratic Party, voters have their limits. When joblessness is stuck near 10 percent, they'll vote for almost anyone who's not a member of the president's party. Almost anyone -- but not anyone.

That's the lesson from Nevada, where Harry Reid was just reelected -- by 5 points and with an outright majority -- under conditions that no incumbent has any business surviving. Nevada is a swing state, unemployment is higher there than anywhere else in the nation, home foreclosures are rampant, and Reid's popularity -- thanks to his long tenure in Washington and his status as the party's Senate leader -- has dipped to career-killing depths. But for an opponent he drew Sharron Angle, a candidate so alarmingly erratic and ideologically extreme that voters held their noses and sent the reviled Reid back to Washington for six more years. The bar for Angle was absurdly, comically low -- and she still couldn't clear it.

Two things are striking about Angle's failure: 1) You could see it coming; even before the GOP primary, it was obvious that Angle's nomination would give Reid -- supposedly the Republican Party's top target for 2010 -- his best and only chance of winning; and 2) The Republican Party's base -- also known as the Tea Party -- insisted on nominating her anyway. In other words, this was not a case of Republicans nominating a normal, seemingly electable candidate only to catch a bad break with that candidate committing some terrible gaffe (or being undermined by some devastating revelation) in the general election. This was a train wreck that the Republican Party base knowingly and willingly brought upon itself, all in the name of ideological purity.

Nor is Nevada the only place where the Tea Party base did this. Establishment Republicans pleaded with their base to nominate Mike Castle in Delaware, in the name of winning the seat in November. But the base, egged on by Rush Limbaugh and other right-wing voices, went ahead and anointed Christine O'Donnell, in the name of purity. A 15-point win in November turned into a 15-point loss. Something similar happened in Alaska, where Tea Partier Joe Miller appears headed for defeat (after a lengthy court fight, it would seem). There, at least, Miller's candidacy didn't cost the GOP a seat, with Lisa Murkowski poised to win on write-ins; but it could have -- and it would have been fine with the base.

This is the mind-set that has gripped the Republican Party in the age of Obama. Not since the late 1970s have we seen this kind of purge campaign within the GOP, and the ramifications for 2012 are potentially huge.

That the GOP nominates the "next in line" guy every time it has an open presidential nomination is conventional wisdom. But that tradition is in peril heading into 2012. Will the GOP that gave us Angle, O'Donnell, Miller and Ken Buck really choose Mitt Romney (who would probably have little trouble defeating Obama if the economy is weak) when they could have, say, Sarah Palin or Newt Gingrich? Notably, Tuesday's exit polls found that Romney now leads Obama in a hypothetical match-up, by 5 points. But Gingrich trails by 2, and Palin by 8. It's early, yes, but this was the same kind of warning  sign that Republicans in Delaware were getting when they chose O'Donnell.

It's true that plenty of Tea Party-backed candidates won on Tuesday, and for this there are several explanations. On the House side, a major component of the Republican gains came in districts that were won by John McCain in 2008 (even as they sent Democrats to the House); in these districts, Tea Party ideology simply wasn't much of a liability. Plus, House candidates tend to be more anonymous to voters than Senate candidates, so it was easier for Tea Party candidates to slip through simply on the strength of their Republican label -- a clear asset in most parts of the country this year. And the Tea Partiers who won Senate races benefited from political demography (like Rand Paul in Kentucky, a state whose voters were hostile to Barack Obama even before he was elected) or reassuring personalities. Marco Rubio will probably vote exactly the same way Christine O'Donnell would have in the Senate, but he is a skilled public performer who communicates competence and authority. In the atmosphere of 2010, with voters badly wanting to give Republicans the benefit of the doubt, this was enough for Rubio, who was also helped by  the three-way nature of Florida's Senate race. (In this sense, Rubio's victory can be likened to Ronald Reagan's in 1980; then, the economy was in terrible shape and voters were hungry to push Jimmy Carter out, but polls showed deep concerns about Reagan's ideological extremism; ultimately, Reagan's personality was reassuring enough to clear the low bar that voters had set.)

What separated O'Donnell, Angle and Miller from victorious Tea Partiers is that they were, as statewide candidates, in the media's spotlight -- and their performance in that spotlight thoroughly undermined the public's confidence in them. But through it all, they remained favorites of their party base. This is, essentially, the story of Sarah Palin's national political career. The overwhelming majority of Americans do not believe she is qualified for the presidency -- but the GOP base does. Gingrich, for different reasons, similarly turns off general election voters.

Whether the GOP will nominate Palin or Gingrich, or some equally toxic candidate, is an open question. Besides Romney, there are potential Republican candidates who, like Pat Toomey in Pennsylvania this week, would fall into the "flawed but good enough to win if the circumstances are just right" category. Haley Barbour comes to mind here; if the GOP nominates him and the economy is staggering, he could probably beat Obama. But voters showed this week that they do have their limits, and a nominee like Palin or Gingrich would clearly test those limits in '12. Nor is it hard to envision the same purity-over-electability fervor that prevailed this year guiding Republican primary voters in two years.

If the economy turns around, I'll stand by my belief that Barack Obama will be reelected no matter whom the Republicans nominate. But even if it doesn't, I still think he might get by. Among Republicans, non-electability seems to be in vogue.