In October, the U.S. economy added 151,000 jobs. But the overall unemployment picture is still awful 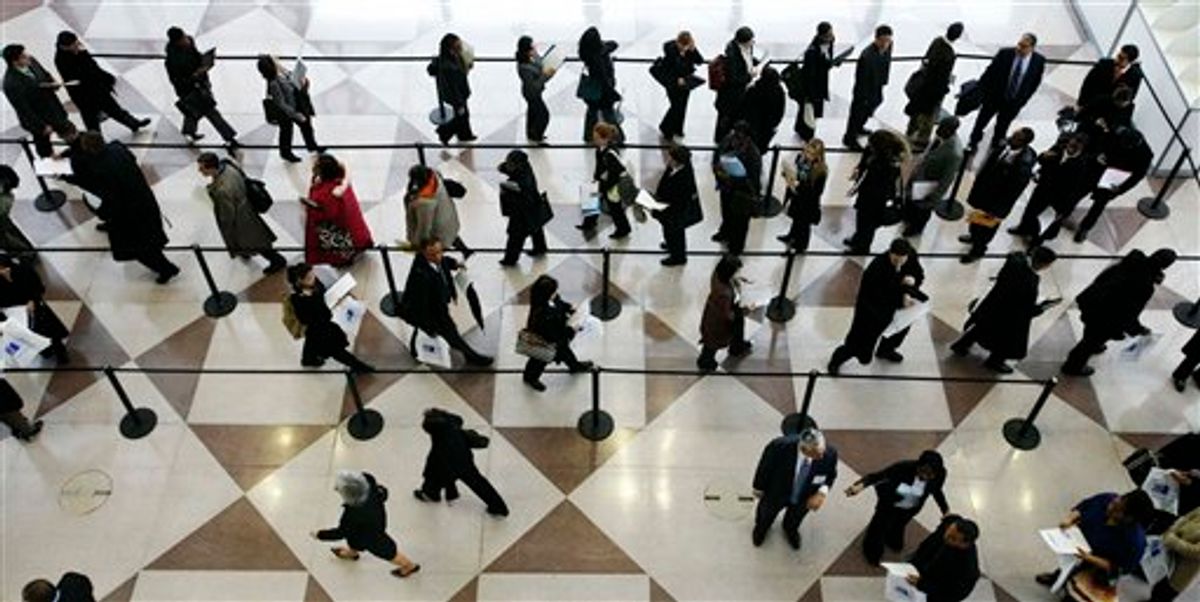 FILE - In this March 20, 2009 file photo, a line of job applicants snakes through a rope-line to attend the CUNY Big Apple Job Fair, in New York. In the previous survey in July, the economists predicted unemployment of 8.7 percent at the end of next year. In the survey before that, they foresaw 8.4 percent. Some now think unemployment won't drop to a historically normal 5.5 percent to 6 percent until at least 2018 _ several years later than envisioned earlier.(AP Photo/Mark Lennihan, file) (AP)
--

The U.S. economy added 151,000 jobs in October. All things considered, that's a pretty good number -- one of the best showings in 2010 if we exclude the spring totals pumped up by Census hires. Also encouraging: the number almost entirely reflects private sector gains. Government payrolls fell by 8000. The unemployment rate remained at 9.6 percent.

Temp job employment grew and the average work week inched up -- both signs, supposedly, that employers are feeling some pressure to hire workers full-time.

But if you step away from the top-line number, the basic parameters of the U.S. labor situation are still impressively grim.

Millions of Americans have been without work for more than six months. Millions more want work but haven't looked for a job in the last month or have given up looking entirely. The U-6 number, which measures the "total unemployed, plus all persons marginally attached to the labor force, plus total employed part time for economic reasons" still hovers at a criminally high 17.0 percent, down from 17.1 percent in September.

If the top line number is the beginning of a sustained upward trend, then the October labor report is good news indeed. But while the stock market is likely to surge again, bolstered by the news and juiced by Fed stimulus, there's no escaping the larger context: It's very, very bleak out there, and signs of improvement are grudging.