The hagiographers are out in full force this week 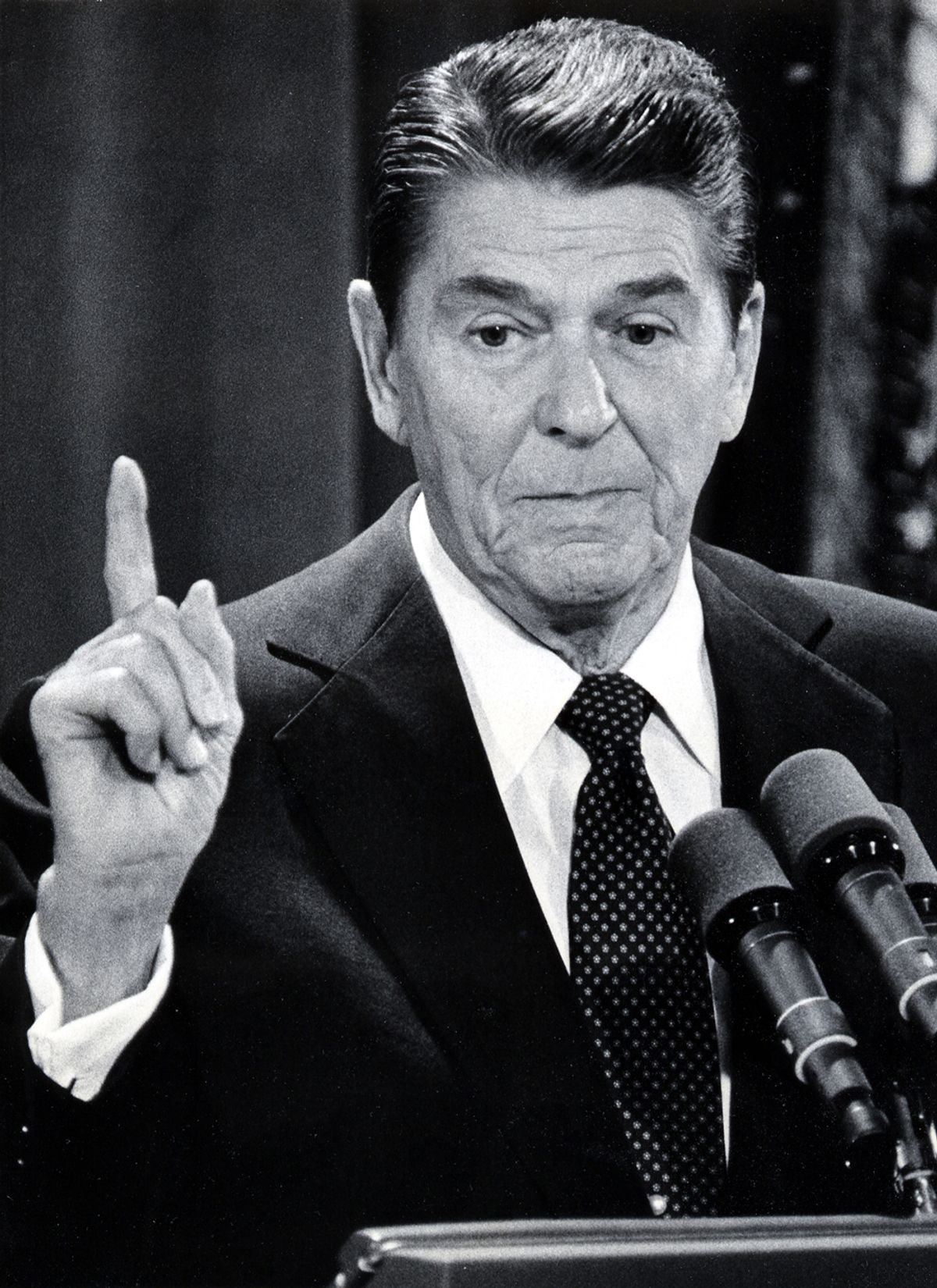 Craig Shirley, a Republican political consultant, is rather upset that so many comparisons have been drawn this week between Barack Obama and Ronald Reagan, who emerged from a disastrous midterm election in 1982 in roughly the same political position that Obama now finds himself.

"In fact, there is no comparison," Shirley writes in a FoxNews.com column, "mainly because even though Reagan's popularity had sagged and support for Reaganomics had fallen, when pressed, in all the polling data, the American people still believed in Reagan's prescriptions. "

I've written plenty about the absurdity of wishful, backward-looking assertions like this, so I'll leave that aspect of Shirley's piece alone. But something else he wrote caught my eye:

[Reagan] did all these things because he believed and lived American Exceptionalism.

And then he rode off into the sunset, never worrying about his post-presidency as a means of cleaning up the mess of his time in office.

He left no mess but instead, the country and the world much better off than he found it. Reagan's legacy didn't need to be rehabilitated. After all, his approval rating in January of 1989 was 70 percent. Among voters under 30, it was a mind boggling 85 percent!

This, of course, is the right's preferred Reagan narrative, the idea that his presidency was one long love fest between leader and the people, and that even after he left office Americans never stopped yearning for a Reagan restoration. But it is absolutely false.

I'll take Shirley's word on Reagan's January '89 poll numbers, although I seem to recall Reagan's poll numbers spiking in his final weeks in office, when the news was filled with retrospectives on his presidency and tributes from his allies and foes -- coverage that would boost any president's ratings. But what Shirley ignores, like all Reagan hagiographers, is the remarkable, precipitous decline in the Gipper's public image over the next five years, as Americans grappled with some of the consequences of his presidency.

Shirley pretends there was no "mess" left to clean up, but tell that to George H.W. Bush, who upon taking office had to deal with a Savings and Loan crisis brought on by Reagan's policies. Bush ultimately authorized a massive, politically toxic bailout -- and the crisis has much to do with the recession of 1990 and 1991. There was also the little matter of Iran-Contra, the scheme by which arms were sold to Iran with the profits used to fund an illegal war in Central America, which resulted in the indictment of 14 Reagan administration members, 11 of whom were ultimately convicted (although some of the convictions were later tossed out). Reagan himself was still dealing with that mess after leaving the presidency; here's some of his testimony from 1990:

And then, of course, there was the national debt, which in the 192 years before Reagan's presidency had risen to around $1 trillion. But in just eight years under Reagan, it exploded to nearly $3 trillion, thanks to his steep tax cuts, ramped-up defense spending and failure to reduce the size of government. Again, it was left to Bush to try to clean up the mess; hence, Bush's 1990 decision to raise taxes in an effort to tame the country's deficits. Like the S&L bailout, this was a deeply unpopular move, especially in light of Bush's "no new taxes" pledge in 1988, but was -- ultimately -- one of the reasons America was running surpluses by the end of the 1990s.

The mess brought Reagan's poll numbers crashing down to earth in his post-presidency. By the summer of 1992, a USA Today/Gallup poll found that just 24 percent of Americans said their country was better off because of the Reagan years, with 40 percent saying it was worse off. Reagan's own favorable rating had fallen to 46 percent -- making him significantly less popular than Jimmy Carter, whose favorable score was at 63 percent at the time. Republicans brought Reagan out for their 1992 convention in Houston (with polls showing Bush losing badly to Bill Clinton), but the magic  was gone. Here's how Adam Nagourney, then with USA Today, explained it in a news story at the time:

With his personable style and shrewd grasp of changing political attitudes, Ronald Reagan once loomed as a larger-than-life figure - a threat fearsome to Democrats even in retirement.

But when the former president speaks tonight at the Republican convention, he does it with the Democrats' blessing. Because the man for whom an entire political movement was named - Reagan Democrats, the blue-collar voters who fled their party's presidential candidates in the 1980s - has come to personify Bill Clinton's main assault on President Bush.

Not only has Reagan's popularity dropped steadily since he left office, but more ominous for Bush's re-election, Reagan's standing has fallen among Reagan Democrats as Clinton has repeatedly hammered his economic policies as favoring the rich.

The political picture has changed so much that Clinton's sole scheduled appearance this week is with Jimmy Carter, the man Reagan defeated in 1980.

Of course, Reagan's image has since been restored, something that has a lot to do with time and distance; the details of his presidency are largely forgotten now, which makes the effect of video clips from his days as president much more powerful. Plus, as Will Bunch has written, the right has since the mid-1990s engaged in a concerted effort to restore Reagan's standing. He was always a compelling public performer, and if anything, his old speeches are more effective when viewed today. The conservatives who lionize Reagan today are worshiping a flattering caricature. The real Reagan, as president and in the immediate aftermath of his presidency, had a far more complicated relationship with public opinion.