"Hawaii Five-O": This is what hit TV looks like

CBS's tropical cop drama serves up big waves, cool songs and stories as subtle as a karate chop to the jaw 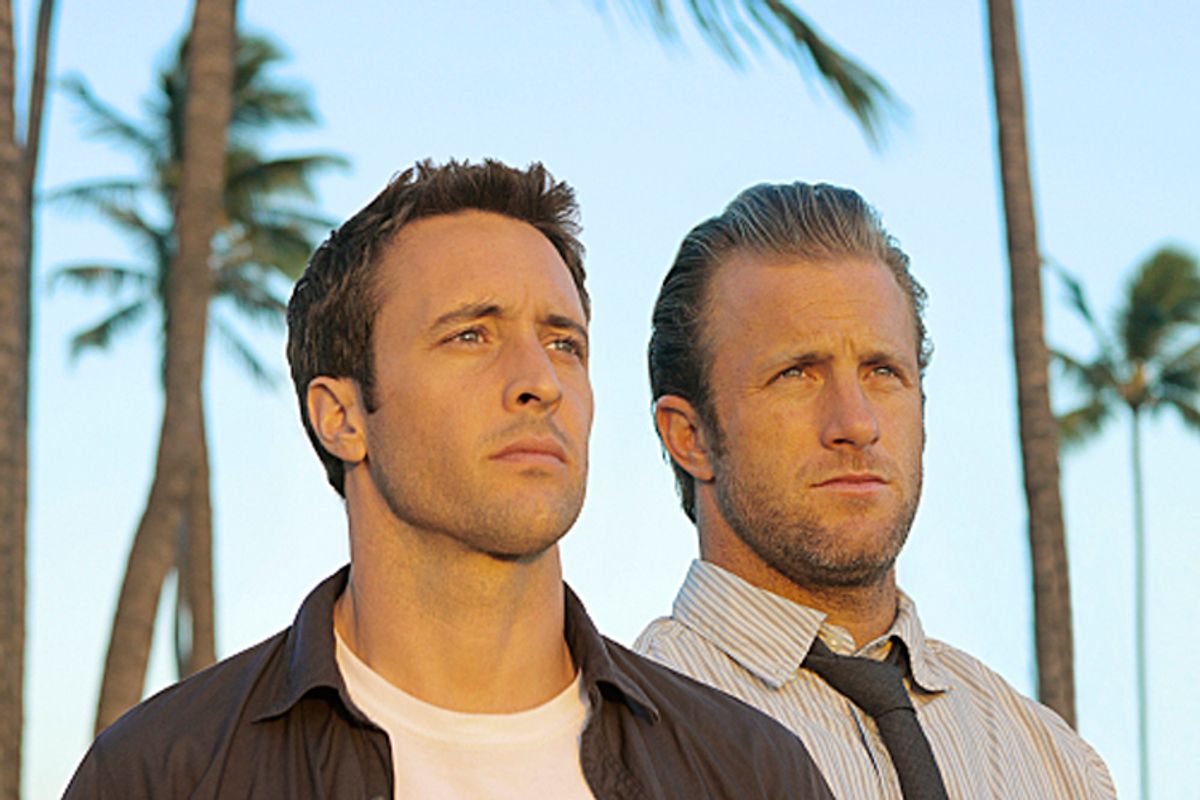 My youngest daughter, who is 19 months old, has no self-restraint. She can't walk by the dog's water bowl without plunging both of her hands into the water. If she sees a Barbie shoe somewhere, it must go into her mouth immediately, even if there are two other shoes in there already. The second she gets tired of her milk, it's time to pour it all over her chair. If she's naked, then she's looking for a good spot to pee, preferably in some carpeted corner where the smell won't come out.

Network TV writers remind me a lot of my daughter. I imagine them, sometimes, sitting around in the writers room together, shoving Barbie shoes into their mouths, pouring their Fiji bottles into their laps and peeing in the corners of the room, all the while shouting at each other, "The murder victim should either be a stripper with a coke habit or the cheating wife of a very rich, very powerful man!" "No, no, she should be a depressed midget who travels with the county fair as a carnival freak!" "And one of the hostages should definitely have asthma, or a heart condition … or leprosy!" "And then the murder victim's son should be so traumatized by what he saw that he can't speak … or maybe there are twin sons, who speak a secret language all their own!"

OK, maybe the writers are shoving pizza in their mouths instead of Barbie shoes, but the level of impulse control is about the same. When your main objective is to capture a national audience's attention and never, ever let it wander, the slightest interest in nuanced storytelling or subtlety or believability falls by the wayside immediately. You don't need a compelling premise or some layers of meaning or a distinct perspective or anything resembling a larger message. What you need is sex, drugs, rock 'n' roll, murder, infidelity, Russian spies, lovable mommies, arrogant businessmen, chicks in bikinis and chain-smoking pimps, all before the first commercial break.

Considering the fact that the needs of the modern audience roughly resemble the needs of your average crack-addicted 14-year-old, it's not hard to understand why CBS's "Hawaii Five-O" (10 p.m. Mondays) is one of the big new hits of the fall season. You start with a familiar rock tune (the Rolling Stones "Gimme Shelter," Red Hot Chili Peppers' "Higher Ground,"), cut to an aerial shot of crystal blue water and white sand, skitter over to a close-up of a few juicy butts hanging out of bikini bottoms, pan across a sunny Waikiki skyline, zoom in on a cool surfing stunt, and then start with the story du jour, already in progress. Bad prisoner guy holds guard at gunpoint, escapes from jail, leaving cops confused! Surfing legend catches a wave at an exhibition, then collapses suddenly. He's been shot! Woman is attacked and killed, her husband runs from the cops, holding a bloody knife … but did he really do it?

Once you get the basic idea, we cut to that old familiar "Hawaii Five-O" theme song -- which is, not incidentally, one of the best theme songs in TV history -- and then you've got more crystal blue waves, more juicy butts, plus some macho men running and jumping and shooting. Before you know it, you're hooked. It's like "CSI: Miami" but without the sepia-toned swamps and the alligators reflected in David Caruso's ugly mirrored sunglasses. It's like "Law & Order," but with sunshine and delicious tropical fruity drinks where a grumpy Jerry Orbach should go.

But if we're hooked, we're hooked like a toddler with a mouth full of Barbie shoes -- eventually, we're either going to choke or projectile vomit all over the room. That's about what it feels like to watch a whole episode of "Hawaii Five-O," too. Because after the guy who just killed his wife (but obviously didn't really do it, since he's holding a bloody knife) goes to the battleship and holds a bunch of tourists hostage, we know that our hunky star McGarrett (Alex O'Loughlin) is going to use his Navy SEAL background to swim under the battleship and climb up the side like a really hot modern pirate, squinting all the while (because that's how macho guys hold their faces, to show that they're tough). Then he's going to put himself in harm's way and save the hypoglycemic hostage and truly empathize with the murder suspect and all along, he's going to urge his men to solve the murder, because despite the evidence, he just has a hunch that this man didn't kill his wife!

But that alone wouldn't be enough to keep our interest, of course. Along the way, McGarrett also has to meet up with a wise old veteran who overhears his name when he's on the phone and realizes that he once served on the Arizona with McGarrett's grandfather, who died at Pearl Harbor. Suddenly, the action stops completely and the old guy is getting all worked up and patriotic and McGarrett looks deeply moved (because he's not squinting for once). The music swells as the old guy tells McGarrett, "The man that you are named after was a real hero. You should be very proud!" "I am proud," McGarrett replies, and the faintest trace of tears come to his eyes. Aww, hot guy sad. Patriotism and old guys and honor and stuff. Sniff. Awesome.

Even though this tidbit has nothing whatsoever to do with the story, we need it like we need blue skies and Hawaiian shirts and white sand and shave ice. Of course, we also need the little girl whose mommy was just killed right in front of her pretty saucer eyes. We need Boomer -- err, I mean Kono (Grace Park) -- to slowly gain the little girl's trust by taking her out for … shave ice! By the beach! Because then a big Hawaiian guy whom Kono calls "Uncle" can serve the shave ice to them, and the little girl can lament the fact that Daddy loves lemon shave ice, and then the little girl can explain that a bad man came and killed Mommy. Right after that, the Bad Man can show up and Bad Men in a van can grab the little girl and drive away, fast! Oh noes!

That's when the writers go from pouring their Fiji bottles into their laps (Wise old patriot remembers your grandfather!) to peeing in the corners (Little girl reveals murderer, then gets snatched off the street by meaty-looking thugs!). Of course, we knew they were going to start peeing in the corners soon enough, because from the second Kono met the little girl, she kept telling her, "Don't worry, you're safe with me." and "Nothing's ever going to happen to you, not while I'm around" and "Thugs in vans aren't going to just grab you right off the street in broad daylight, because that wouldn't be remotely believable."

And once the entire writers' room smells like pee, well, then, what can you do? That’s when Danno (Scott Caan) chases a private jet down the runway in his sports car and the wise old veteran takes a bullet for McGarrett ("Leave no man behind, remember?" Oh yes, we remember.) and Daddy and daughter are reunited to the gentle strains of State Radio's "Keepsake," probably because they've used Israel Kamakawiwo'ole's rendition of "Somewhere Over The Rainbow" three or four times by now.

And even though it's a little strange that the Hawaii of 2010 so closely resembles the Hawaii of those very special episodes of "The Brady Bunch" where the Bradys fly to Honolulu and become convinced that they're cursed until they return the mysterious idol that they found to the ancient burial ground (which itself closely resembles the last 20 seasons of "Survivor"), there is something vaguely appealing about "Hawaii Five-0." Is it the clear blue waves? Is it the hot ladies in bikinis? Is it the two macho leading men, Danno and McGarrett, who bicker through each scene in the same teasing, testy way that every pair of mismatched cop partners have bickered for the past three decades?

Danno: (on the phone with McGarrett) You miss me, don't you?

McGarrett: Oh yeah, I wish you were here. But you don't swim, do you?

Danno: I don't swim? I swim very well, actually, I just choose not to.

Old veteran: Are you talking to your wife?

McGarrett: I'm talking to my partner.

In case you're unfamiliar with this show or its predecessor, Danno is the goofier, more talkative one, and McGarrett is the tough guy. McGarrett says stuff like, "I will literally pay you cash to stop talking!" and "I want this entire beach on lockdown!" and he's always squinting, because he's tough and he's haunted. Danno is also tough but he isn't haunted -- except by a hair stylist who insists on combing his hair straight back like Gordon Gekko. And these two might make a good team, really… if they were secretly gay, or if one of them was really depressed and slept with the other one's wife on the sly, or if they were up for the same promotion at work and their good-natured ribbing masked a deeper layer of resentment and contempt.

But this isn't "Mad Men," see? This is network television. This is "Fantasy Island," a quarter of a century later, with fewer opportunities to overuse dry ice and demean midgets. The people who create this stuff have no impulse control, and they're handsomely rewarded for it.

But you know what? When you pick up one of those really rubbery Barbie shoes? It sort of begs to be put in your mouth. And it's so soft and springy in there, you just have to chew it a little. At that point, are you really going to take the Barbie shoe out of your mouth and dry it off? Are you going to search long and hard for a provocative but subtle way to encapsulate your lead character's frustration with the complicated sociocultural pressures of his position? Or are you going to shoot the surfing legend in the head while he's riding the Pipeline?

Sometimes it's easier to shrug and say, "Let somebody else make good TV. I just want to dunk my head in the dog's bowl."