Apparently the worst moment of his presidency -- which included 9/11 -- was getting slighted by Kanye West? 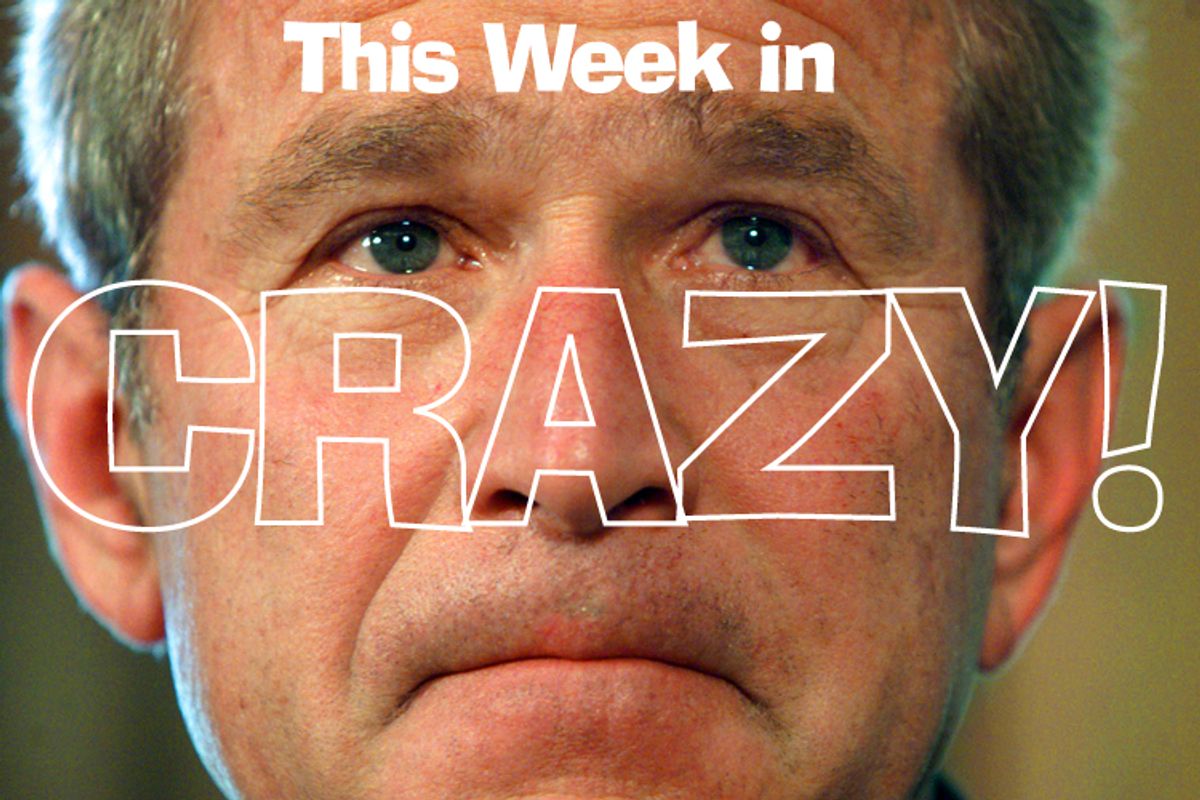 From his recent interview with Matt Lauer, on the occasion of the publication of Bush's new book:

MATT LAUER: You remember what he said?

PRESIDENT GEORGE W. BUSH: Yes, I do. He called me a racist.

MATT LAUER: This from the book. "Five years later I can barely write those words without feeling disgust." You go on. "I faced a lot of criticism as President. I didn't like hearing people claim that I lied about Iraq's weapons of mass destruction or cut taxes to benefit the rich. But the suggestion that I was racist because of the response to Katrina represented an all time low."

MATT LAUER: You say you told Laura at the time it was the worst moment of your Presidency?

PRESIDENT GEORGE W. BUSH: Yes. My record was strong I felt when it came to race relations and giving people a chance. And -- it was a disgusting moment.

Someday, when historians of the 21st century are writing their hover-textbooks, they will note, gravely, that the darkest moment of its first decade involved Mike Myers, but it wasn't "The Cat in the Hat."

Yes, a weird, off-script moment of Kanye West awkwardly speaking his mind on live TV apparently defined Bush's presidency as much as the exact same thing would later define a Taylor Swift song. And in Kanye's defense, the idea that his ad-libbed response to the horror that was the response to Hurricane Katrina was worse than the actual destruction and death that resulted from the botched response to Hurricane Katrina is significantly crazier than thinking Beyoncé's video was better than Taylor's.

Former President Bush did not call it the worst part of that month. Or that year. Bush says Kanye's remarks were the worst moment of a presidency that included 9/11. It was more upsetting to hear that a rapper thought he didn't care about black people than it was to hear any number of more serious critics say that thousands of Americans died in order for his rich friends to make a profit.

Bush has even twisted the incident in his memory to make it sound much worse than it did -- Kanye did not say "he's a racist." Kanye said he just didn't care. The genius of Kanye's remark was always in the phrasing. George W. Bush doesn't hate black people. But he never demonstrated that he was particularly concerned with the plight of black people outside of his social and professional sphere.

Of course, Bush's response is just a symptom of a sort of mass delusion. As Adam Serwer writes: "Many white Americans have settled on the idea that calling someone a racist is actually the worst thing you can ever say about someone."

Bush wasn't actively racist, Serwer adds. "The response to Hurricane Katrina was a reflection of basic administrative incompetence and cronyism, not active racial animus." But, as Amanda Marcotte said in a wonderful piece on Kanye as tragic Greek prophet: "His accusation was that Bush's animus wasn't active, but passive. He 'doesn't care.'"

But, Bush told us this week, he does care. He cares a lot. Not about the dead and neglected of New Orleans. He cares about people accusing him of not caring.