The soft war against women

It may seem like a wonderful time to be female, but there is a darker current beneath the surface of society 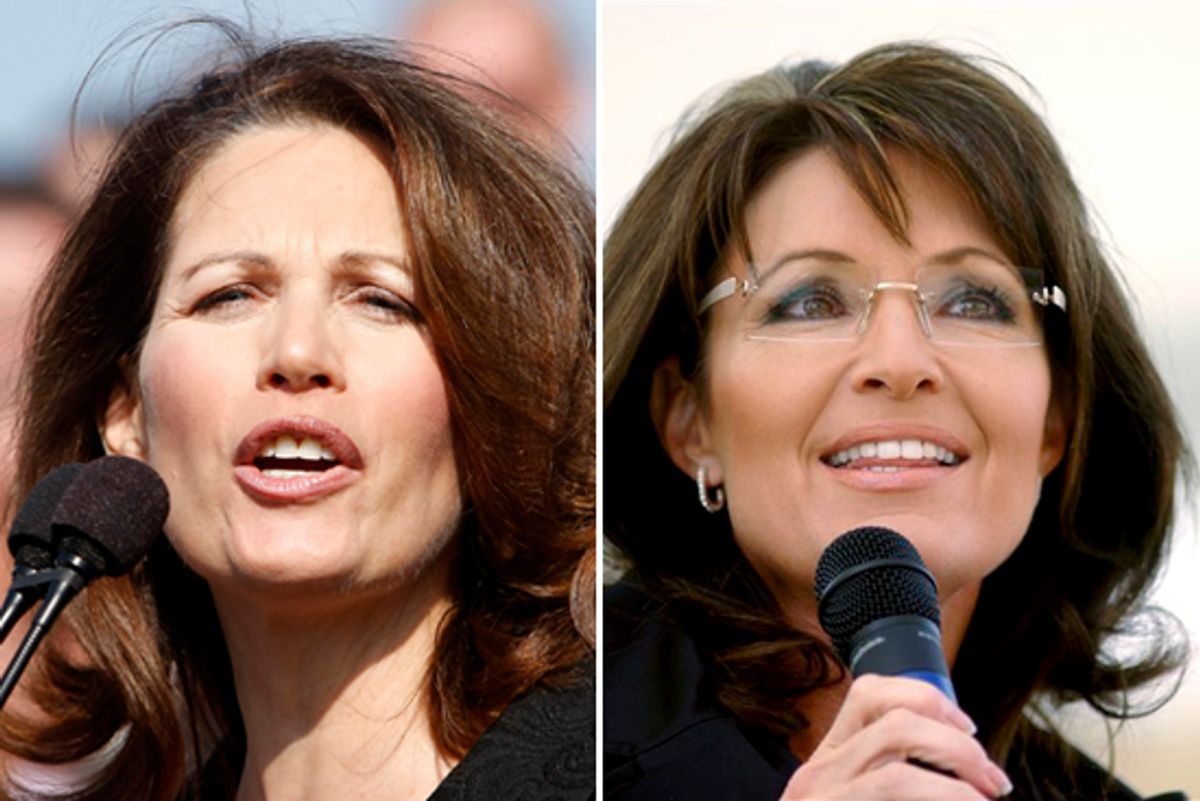 Call it "Mama Grizzly Feminism," as Sarah Palin does, and start worrying about the real thing.

In the run-up to the midterm elections, a bevy of conservative female candidates invoked feminism in one way or another, but all backed policies harmful to women. In the process, they became media darlings. Palin, who wasn’t running herself but helped get a number of candidates on the ballot across the country, opposes abortion and sex education. Delaware Senate candidate Christine O’Donnell called masturbation adultery and promoted abstinence. Sharron Angle in Nevada opposed abortion in all cases, even when children were raped and impregnated. In California, Senate candidate Carly Fiorina was antiabortion. She was a speaker at the evangelical megachurch Willow Creek, which requires any gay or lesbian members to practice celibacy. None of these candidates won, but except for O’Donnell, they ran very competitive races.

The 2010 Year of the Woman was mainly about candidates who supported policies traditionally advanced by white men. This is not just an isolated political accident. It is part of a pattern that has dire consequences for women.

At first glance, it may seem like a wonderful time to be female -- a time of empowerment and achievement: the "You Go, Girl!" era.

But there is another, even stronger current running beneath the surface of society that carries a very different message. The warning today is far more subtle than it was in the early "Backlash" days, when the argument was that women simply could not and should not do what men could do. Now, the message is, "Yes, indeed, you can do it all, and often better than men. But beware!"

Women, you’ve come too far too fast, and because of your success, men are faltering, leading to, as the Atlantic Monthly put it, "The End of Men." A 2010 cover article bearing this title claimed that women were fast taking over the important jobs in society.

Women, you’ve paid too high a price for achieving; you will probably end up alone and miserable. Men do not like high-achieving women. (As a Forbes.com article put it, men who marry career women will be unhappy.)

Some people claim that feminism is an incomplete movement, needing just a few improvements to guarantee that its gains are permanent. But there’s a radically different view, based on history. Once before, feminism vanished into the shadows, its forward movement stalled and its major players reduced to caricatures of silly women in funny clothes who chained themselves to lampposts just to get the vote. (Which they didn't really need, because men would protect their interests.) Women were obliterated from history for nearly half a century.

It could happen again. As Susan Faludi wrote in the October 2010 issue of Harper's, the waves of feminism that came and went did not produce stable political power. "With each go-round, women make gains, but the movement never seems able to establish an enduring birthright, a secure line of descent -- to reproduce itself as a strong and sturdy force."

We stand today at a crossroads. In a time of economic crisis, with men fearful for their jobs, with an aging population that will need the care that women have traditionally given, with a popular culture and its new technology sexualizing women to a degree perhaps never seen before, and with female political candidates who oppose many of the rights women have fought for gaining political acceptance, it is a dangerous time. Beneath the shiny veneer of the "You Go Girl!" message is a more sinister reality. The culture is becoming extremely hostile to feminism’s goal of equality between the sexes.

The new "soft" war against women is less a frontal assault than an ongoing, and very effective, guerrilla movement. Under a veneer of success, women are losing ground in a myriad of ways. While some high-profile women in politics or in corporate America are touted as "proof" of women’s power, across the board women are slipping backward. Women’s progress has not just stalled, in many ways it is being jammed into reverse. Once we thought that when women achieved a "critical mass" in the job market, when there were enough of them to make a difference, the whole work environment would improve. But progress has been slow. Some social scientists now believe that, in fact, "critical mass" is working the other way. Too many women are competition for men, and there’s a major pushback.

Women’s gains are hard won and easily lost. New research shows that even when women reach the top in male-dominated professions, they are vulnerable. Yale researchers found that if such women made small mistakes -- even a single gaffe -- they were more likely to fall from that position than a man would be. The phenomenon is known as "the Glass Cliff." Another aspect of the "Cliff" "is that women are overrepresented in precarious leadership roles associated with high risk and an increased chance of failure." In fact, according to a team of British researchers, women were only appointed over qualified men to the top job when there was a high risk of failure.

Even in areas where women are doing well, there is no guarantee they will continue to do so. The narrative of "The End of Men" is based on the fact that there are now more women in college classrooms than men. But college success does not mean women are taking over. Women achieved parity with men in college 20 years ago, but as a Sloan Foundation-funded report put it, "Women Lead in College but not in the Workforce." Women’s wages, relative to those of men, have not kept up with their gains in educational attainment, partly because men still dominate the higher-paying fields and women still do the majority of childcare.

But the mass media these days are totally uninterested in women's problems. Men are the big story -- and how women are harming them is nearly always the subtext. In fact, argues Andrew Hacker (in his book "Mismatch: The Growing Gulf Between Women and Men"), women’s achievements may diminish men's self-confidence and even their masculinity. "We will soon see ... how far self assurance associated with manliness can survive when each year sees more appointments and promotions going to the other sex."

Society is falling apart, the message goes, and you women, because of your unique caring natures, have to put it together again. Smart young women should desert high-paying jobs, and choose, instead, to concentrate on being the perfect mother, a hard job that will occupy all your time. If you do work, take a job that requires caring and helping, because that’s what you are good at. You are not made for risk or high-level leadership. You are naturally uncomfortable with power. (As Fortune asked rhetorically on its cover: "Power: Do Women really Want it?" The answer, according to many, is no. Women are happier in more traditional roles.

Even if you do achieve a high-level job, you should always put the needs of others -- your fetus, your child, your husband, your parents, your co-workers -- ahead of yourself, because you are programmed for relationships.

If you get pregnant, you should carry the baby to term, no matter the circumstances. No less a sage than Supreme Court Justice Anthony Kennedy suggests that abortion could cause you lifelong stress and pain.

Old-style feminism is dead, and good riddance, because it was unnatural anyway. Banding together with other women to get better childcare, family-friendly policies at work, and better policies against sexual harassment and discrimination is so '70s. Many women have internalized the messages of "essential feminism," which exalts women’s caring natures. In her book "In a Different Voice," Carol Gilligan claims that men and women make moral decisions in fundamentally different ways, with women basing their decisions on caring, and men basing such decisions on justice. Women have superior caring instincts, she argues. In "Women’s Ways of Knowing," Mary Belenky and her colleagues argue that men value excellence and mastery in intellectual matters, and evaluate arguments in terms of logic and evidence. Women, in contrast, are spiritual, relational, inclusive and credulous. (Never mind that no reliable scientific evidence supports such claims, they have become immensely popular anyway.)

A continuing hyper-sexualization of women and girls dominates the media and the culture. As critic Gail Dines notes, "Something has shifted so profoundly in our society that the idealized, pop culture image of women in today’s pornified world is no longer a Stepford Wife but rather a plasticized, scripted, hyper-sexualized, surgically enhanced young woman. The media world we live in today has replaced the stereotyped Stepford Wife with the equally limiting and controlling stereotype of a Stepford Slut."

In October of 2010, Fraternity pledges at Yale chanted as they marched across the campus. This is what they shouted:

My name is Jack

And fill them with my semen

So not even women at one of the nation’s most elite campuses can escape the growing contempt and threat of violence directed against females. The message of these chants is that women must be available to any male demand (even when they are dead) and that they are sluts who are equated with murdering terrorists in the eyes of their male fellow students.

Some future media historian may refer to the present era as the Age of Pornography. Never before have there been so many images of women in sexual poses that are demeaning, violent and subservient. Clothing marketed to young teens today would only have been seen in the past on hookers or strippers. This hyper-sexualization of young women is taking a major toll, leading to severe mental and physical health problems. Some of these include risky sexual behavior, high rates of eating disorders, depression, low self-esteem, and reduced academic performance. In a 2007 major report on girls, the American Psychological Association found the media emphasizing young women's sexuality "to a stunning degree."

According to the report, if girls learn that behaving like sexual objects earns them approval from society and from people whose opinions they respect, they may begin to "self-sexualize"; in fact, to become their own worst enemies as far as their health and well-being are concerned.

Unfortunately, too many young women are unaware of this backsliding. Today, the battle for women’s rights has largely shifted from the legal, legislative area to a struggle for hearts and minds. Though legal battles remain, the messages that are creeping into women’s heads may be the most damaging. We are being persuaded to be our own worst enemies.

The "soft war" is disturbing and pervasive but too little noticed. The many ways and the many arenas in which women are slipping behind are obscured by narratives about men failing (which some of them are, but not elite white men) and about the ways in which achievement can only bring women misery and pain. (And, by the way, destroy society in the process.)

Given the tailspin in the economy, the disappearance of jobs overseas, and the growing fear about white men, the soft war won’t go away anytime soon.