Was that "60 Minutes" or a job performance review? 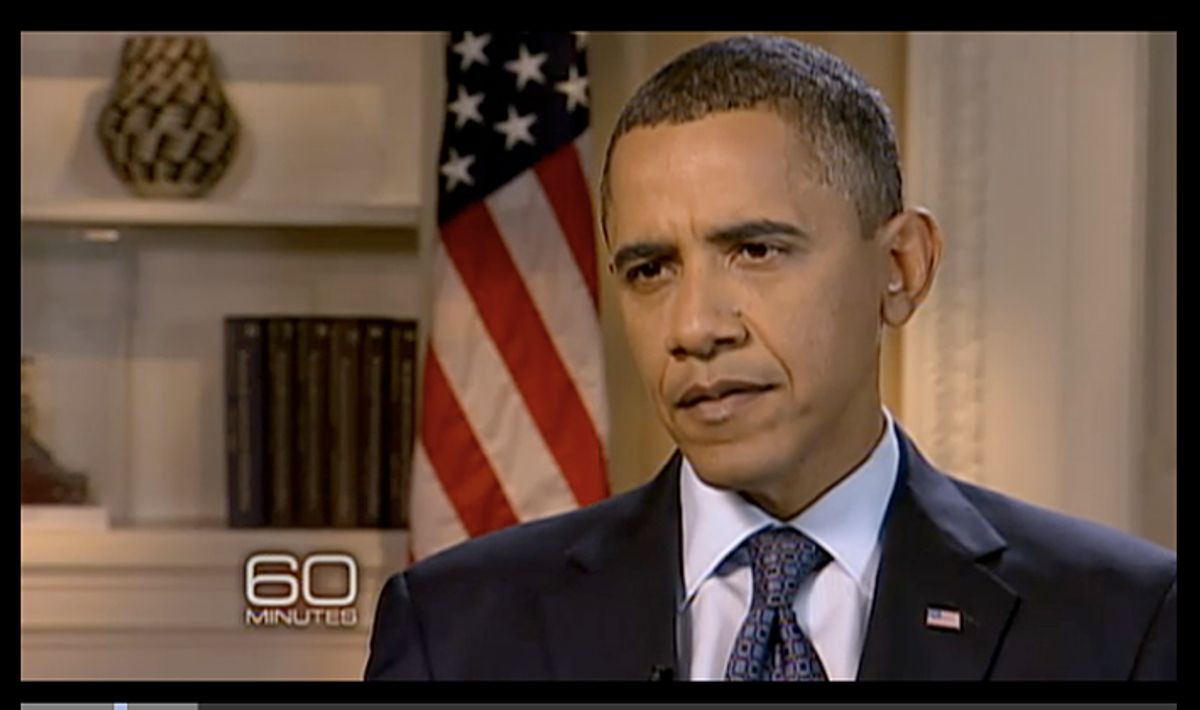 Steve Kroft came across as the boss, and President Obama as a middle-management employee who had consistently failed to live up to H.R.'s expectations in last night's tentative and uninspiring interview. In one of journalism’s favorite tricks -- what would an alien say if he saw this? -- the giant-domed green viewer would have beamed home a message that said: President Kroft has it together.

The shared assumption of the interview was that the president is in a bind. Rarely if ever did Obama challenge any of the rhetorical assumptions of Kroft's questions -- even the highly debatable notion that Americans rejected "big government." Add up the total votes for Democrats -- including Boxer, Brown, Cuomo and others -- and an argument can be made that more votes were cast for a progressive, involved role of government than a rejection of government as a force for good. But there was no push-back by the president on anything. He was a man who had clearly arrived to take his lashes.

Is there no Obama between the passionate intensity of the oratorical Obama -- the yes-we-can figure who can electrify hundreds of thousands -- and the contrite, emotionally neutered, humbled Obama we saw last night? Is there no principled, but pragmatic leader who knows where he wants to go, who can radiate connectedness without using "folks" in every other sentence, who even his enemies grudgingly concede is a formidably appealing foe?

If the president can't find a consistent voice, if he remains an unfathomable figure because he’s not one person but many -- then his presidency is doomed. Ronald Reagan, to whom Barack Obama is often compared for his communicative skills, was always Ronald Reagan. He was Reagan when he nominated Goldwater, Reagan when he was shot -- and joked that he hoped that doctor was a Republican -- Reagan when he told Gorbachev to tear down the wall. It may have been a performance, but it was an unvarying one.

But we have multiple Obamas -- the fiery Obama of the rallies, the complex and searching Obama of the Philadelphia speech on race, the long-winded, perseverating Obama of the debates, the curiously compliant Obama of the early days of TARP, the hands-off Obama who let Congress write his foundational, presidency-determining piece of legislation. And last night, we had the little-boy Obama who had to explain to his boss why the PowerPoint presentation on the "Public’s Perception of Early Twentieth Century Economic Hedonics" was so poorly received by the client.

Obama’s post-shellacking theme is that his failure was one of communication, that "leadership is more than legislation" or some such frighteningly obvious platitude. The Republicans counter that their midterm triumph wasn't because the president didn't get his message across, but that his policies and the direction of the company were understood and rejected.

The truth is closer to what President Obama is saying, but he gets it wrong. In successful leaders, form and function, content and style, are inseparable. Policy is personality, personality is policy. Listen to FDR's Fireside Chats -- delivered in the depths of a real Depression -- and you hear the ineffable qualities of leadership come singing through. He's direct and unsparing about the current situation; he lays out bold policy options with precision and clarity; he radiates enormous confidence without false optimism; he acknowledges the need for sacrifice but never comes close to despair; he's someone who can't get out of a chair, but someone you would leap from a chair to follow anywhere.

The Barack Obama in this "60 Minutes" interview wasn't someone you'd follow to a break-out room. In fact, he didn't even make it clear where he's headed. To some Land of the Compromise? Or the Compromised? And he forgot one little detail about the interview: There's an audience out there. The president never once looked away from Steve and spoke directly to the American people about the election, and where he wants to take us now. He looked grim, he flashed his trademark grin only once, he lacked guts. And he looked scrawny. Evolutionary biology says we are drawn to leaders who are physically strong and able to lead us through long periods of hunger, till the hunters come back. President Obama doesn’t look like he could survive a few weeks of famine.

Much has been written about the parallels between this midterm election and 1994, when Newt Gingrich rolled into town to take on Bill Clinton, with the big question mark being whether Barack Obama has the former president's capacity for shape-shifting, his survival skills, his political antennae. The comparison is only half right. Yes, President Obama has to deal with a divided Congress and a wave of red-meat Republicans at his throat. But President Clinton had established himself as a fully formed individual by that time; as Peggy Noonan wrote at the end of the August, Americans had a framework for him, as they had for other presidents: "Bill Clinton: Southern governor. Good ol’ boy, drawlin’, flirtin’, got himself a Rhodes scholarship. ‘I know that guy.'" Indeed, the president himself said that he was a Rorschach test, upon whom people projected what they wanted to see. Now, the test itself is being tested.

President Obama, as far as the American people are concerned, is still a work-in-progress, and it’s going to be a real challenge to complete a personal work-in-progress when so much national work remains to be done. Last night, we needed to see a passionate, engaged president who admitted a setback but remains undeterred. A forceful, purposeful and appropriately humbled but not demoralized figure. Instead, we saw an incredibly smart man who is incredibly lost. And the lost cannot lead.