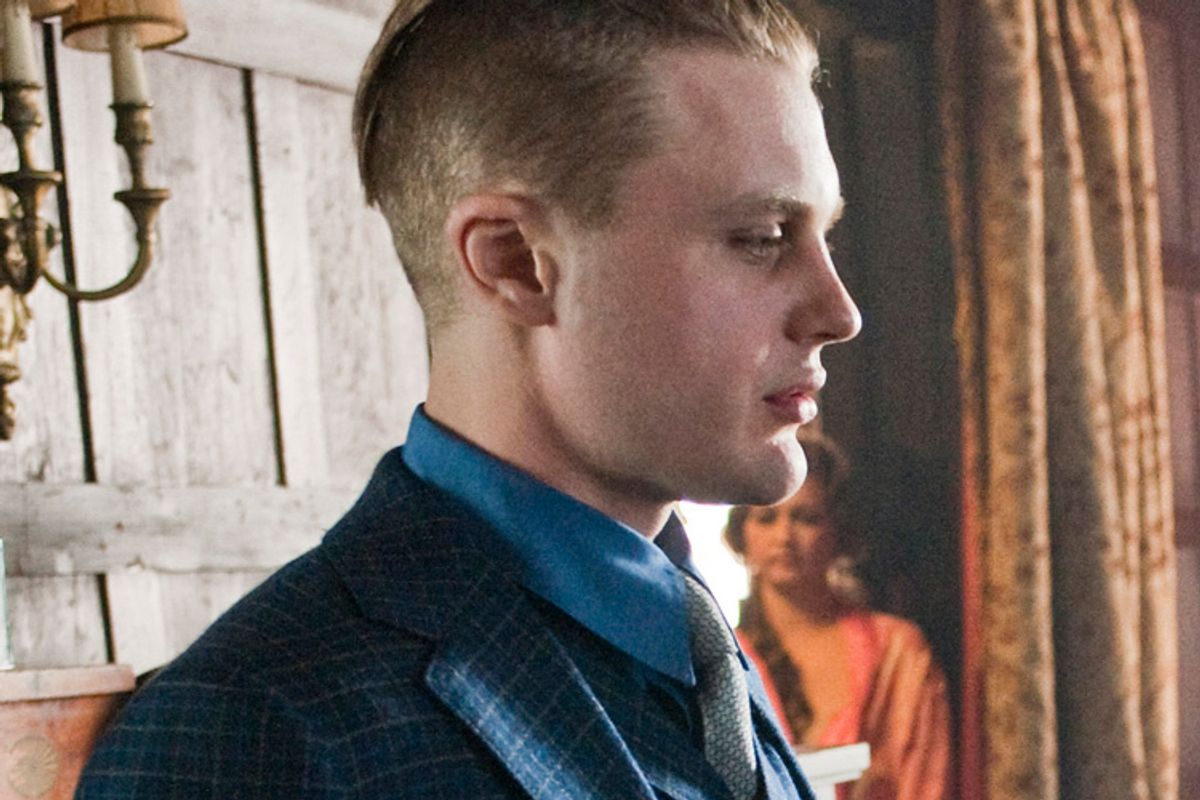 What separates a great episode of serial TV from a merely good one is a sense of overall cohesion, that the stories it's telling are linked together by something more than a common time frame. Particularly in some of "Boardwalk Empire's" early installments, the scenes involving characters other than its protagonists  -- Nucky, Jimmy, Margaret, and to a lesser extent, Agent Van Alden -- felt as if they were just placeholders, setting us up for more interesting developments down the line. I'd wager that fewer people would have objected to last week's love scene between Angela, Jimmy's estranged not-wife, and the wife of a boardwalk photographer, if it had been placed in a more solid context within the episode, rather than feeling like several minutes of hot girl-on-girl action dropped into the middle of the show. (Personally, I found it unobjectionable all the same, and a lot of the complaints about its inclusion sound like thinly veiled prurience to me.) The show has too many characters to give each of them a scene, let alone a series of them, each week; given the forcefulness of Michael Stuhlbarg's Arnold Rothstein, it's a shame he's been reduced to popping up for a couple a minutes each week after week to remind us that the investigation of the fixed 1919 World Series is gathering steam.

Of late, though, the show is on a roll, deftly interweaving its dozens of plots so that even disconnected events resonate with each other. "Hold Me in Paradise," written by Meg Jackson and Brian Kirk, is exceptionally strong in that respect. (Kirk, incidentally, also directed two episodes of the excellent miniseries "Luther," currently airing on BBC America.) Most of the story takes place in Chicago, where a dark horse named Warren G. Harding is about to win the Republican nomination for president. Nucky is there to rub elbows with power, and to flex some of his own; he bumps the presumptive nominee out of the Presidential Suite by explaining to the hotel manager: "General Wood is a war hero, a former Army Chief of Staff, and practically a shoo-in for the Republican nomination. I, on the other hand, am a magnificent tipper." General Wood is moved to the Ambassador Suite.

Nucky is impressed by Harding's campaign manager, played by the habitually oily Christopher Macdonald, particularly when an Ohio judge comes out of a back room at Johnny Torrio's whorehouse to vouch for the man's political acumen. There's a hitch, however: Harding is a prolific womanizer, and a bimbo eruption looms on the horizon. As he's introduced to Harding, who turns out to be a blathering bore, Nucky spots a woman and child being barred from the door, and matches his step to hers as both head for this elevators. The child, of course, is Harding's, and the woman is Nan Britton, who, a few years after Harding's death in office would author a memoir called "The President's Daughter." For now, though, she's just a sweet and hugely naive young woman who carries one of Harding's dreadful love poems in her pocket. (The episode's title comes from one of them, where it's rhymed with "perfect thighs.") Nucky, perhaps homesick for the widow Schroeder, engages her in brief conversation, and she responds with small talk: "Do you have children yourself?" Nucky's wife, as we know, died young, but his response gives us the first hint as to the expanse of his sorrow. "I had a son," he tells this perfect stranger. "He died."

Cut to Agent Van Alden's unhappy home, where he's sitting down for a meal with his sad-faced wife. She, as it turns out, would like to give him a son of his own, but she has an obstruction in her fallopian tubes, one that can be surgically corrected, but only for a price, and not one her husband is willing to meet. Consider Rebekah, he tells her, the childless wife of Isaac, whom God blessed with children after years of prayer. (Although the implication of his words is that his wife's faith is weak, he conveniently forgets that it was Isaac's prayers that healed his wife.) If Van Alden's poor sap of a wife knew what a twisted perv she was married to, she might appreciate that the Lord was on her side. Instead, she sobs at his cold rejection, and his utter lack of concern for her happiness. Kirk exploits the glassed interior doors of the Van Aldens' house to place obstacles between husband and wife, framing each in their own airless, unhappy little box.

Evidently not content with ruining his own family, Van Alden has been intercepting the money Jimmy sends home to Angela, presumably ever since the decoy for Jimmy and Al's ill-fated hijacking in the woods gave them up. (The stack of envelopes in Van Alden's desk drawer suggests either it's been quite a while or Jimmy sends an awful lot of envelopes.) As a result, money is running thin, and Jimmy's mother suggests Angela get a job. Instead, Angela giddily confides in her about her appointment with a Greenwich Village art dealer, which only sharpens Gillian's distaste for Angela's "bohemian" ways.

Nucky set fire to his childhood last week, but his family still finds ways to disappoint him. While he's in Chicago, he's left his brother Eli in charge. Not surprisingly, it doesn't go well. Eli, who couldn't even give a speech to a group of lubricated Irishmen without nearly inciting a fistfight, almost sets Nucky's office on fire while showing his buddies a stag loop, and then he manages to get himself gutshot by the D'Allessio brothers, who are busy intercepting the weekly collection from one of Nucky's casinos. (The regular bagman begs off duty, claiming his daughter is getting leg braces put on that day; expect to see him being asked some very painful questions soon.)

If he can't count on his real family, Nucky has no choice but to turn to their surrogates: Jimmy and Margaret. He needs Jimmy, the prodigal son, to do the dirty work he can't trust Eli to do, especially since it's now clear that someone is making a major move on his territory. Margaret he needs to perform a simpler but equally critical task: remove the ledger from his desk drawer and hide it in his closet, and move into the adjoining suite until he returns. Coming off a confrontation with the jilted Lucy Danzinger, whose line of credit at Madame Genet's has been unceremoniously cancelled, Margaret is getting a better sense of what sort of man she's fallen into bed with, and the ledger presents her with the opportunity to find out for sure. Nucky tells her not to look, but given the extent to which he's already opened up to her, perhaps it won't hurt his feelings that she's unable to resist the temptation.

Before he goes back to Chicago, though, Nucky has one more bit of family business to attend to. He's seen Senator Walter Edge as his means to influence on a national scale, but after learning from the mayor of Jersey City that Edge is a fickle and treacherous ally, Nucky has had it. He tells Harding's campaign manager he'll throw the Jersey delegation Harding's way, but only in exchange for a guarantee that Edge be kept off the ticket. On his way out of the hotel, Nucky lowers the hammer, slaying a surrogate father with as much gusto as he disenfranchised the real one. "The only way you'll see the inside of the White House is on a guided ... tour," he tells Edge, and the camera lingers as the cocky smirk on his face disappears.