How the World Works goes to China

Mayor Mike Bloomberg says Americans don't even know "what China is." So let's find out! 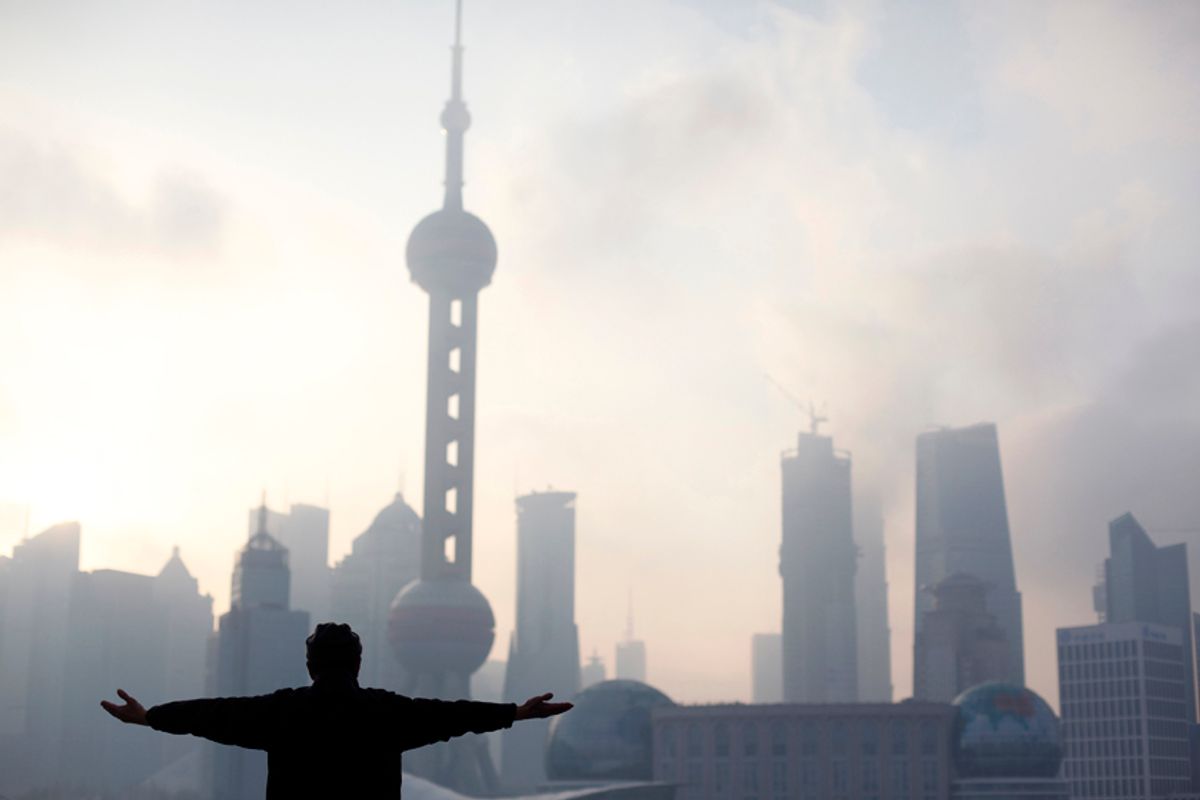 A man practices Tai Chi during an early morning session at the Bund, on the banks of the Huangpu River, following its reopening after a massive renovation for the upcoming Shanghai World Expo 2010 in Shanghai March 29, 2010. Shanghai underwent a massive facelift for the coming Shanghai World Expo due to start on May 1, 2010. The Oriental Pearl tower is seen in the background. REUTERS/Nir Elias (CHINA - Tags: BUSINESS SOCIETY IMAGES OF THE DAY) (Â© Nir Elias / Reuters)
--

I rang the buzzer at the door to the Chinese consulate in San Francisco. A woman's voice answered.

I should have been expecting it, but the sound of that Chinese interrogative -- roughly similar to a Westerner answering a phone with the word "Hello" -- sent a surprising shock through my system. I was standing on Laguna Street in San Francisco, just outside the neighborhood known as Japan Town, but I was also suddenly transported back 25 years, to a time when I lived in Asia -- when I would automatically answer the phone by saying "Wei."

Just one word, and the reality of my imminent trip to China sank in with a vengeance. On Saturday, I will fly to Beijing for a ten-day visit to the People's Republic, my first journey back to Asia in 16 years. For far too long I've been inhabiting an imaginary China assembled from other people's blog posts and eyewitness reports, from the economic data points and trade war animosities left behind by the tides of globalization. Now, finally, I'm going to smell the smog, ride the high-speed trains, unlimber my sadly rusty Mandarin skills, and see for myself what China is all about in the year 2010.

And it's not a minute too soon. Check out these comments from New York Mayor Michael Bloomberg, made over the weekend during a visit to Hong Kong, as reported by the Wall Street Journal.

"I think in America, we've got to stop blaming the Chinese and blaming everybody else and take a look at ourselves," he said...

"If you look at the U.S., you look at who we're electing to Congress, to the Senate -- they can't read," he said. "I'll bet you a bunch of these people don't have passports. We're about to start a trade war with China if we're not careful here," he warned, "only because nobody knows where China is. Nobody knows what China is."

Those are some inflammatory words. And like just about everything that everyone says about China these days, they are both exaggerated and over-simplified. Certainly, there is a great deal of dangerous ignorance about "what" China "is" today. I see it in the comments posted after my own blog posts every time I write about China -- a roiling mass of resentment expressed by latter day cold warriors who seem to be positively itching for a violent confrontation.

But feelings of anxiety and fear about what the emergence of the Chinese economy means for the American standard of living are not groundless. China is affecting all of our lives. The incorporation of China's workers into the global economy has had major ramifications -- contributing to the undermining of union power in the U.S. and the complete restructuring of many industry sectors. American consumers get access to cheaper products in return but it is by no means clear that amazingly inexpensive light bulbs at Walmart compensate for job loss in Ohio. Perhaps the majority of economists think so, but Midwestern voters viscerally disagree.

And there's so much more. The global environmental consequences of Chinese industrialization are troubling, the apparent determination of China to play strategic mercantilist games with key natural resources is provocative, and the difficulty, historically speaking, that reigning great powers have often encountered when coming to terms with rising contenders is unsettling. The world is being remade before our eyes, and massive transitions are never easy.

And yet the sight of hundreds of millions of people emerging from backbreaking poverty and joining the party that the West has been throwing ever since the Industrial Revolution is an amazing, inspiring triumph. China's had a hard couple of centuries -- but finally, nearly a quarter of the world's population is in the middle of a major status upgrade. It's long overdue, and the contributions to science and literature and art that will be made by these newly affluent billions is something that we should be excited about, instead of fearful.

The contradictions are immense. Like a good Daoist sage, my own tendency is to embrace the paradoxes and luxuriate in the complexity. I seek to understand rather than to anathematize. I'm sure the comments in response to this post will recapitulate some of the antagonism that routinely disappoints me, but for now I'm asking you to bear with me. I'm going back to China, and I will tell you about everything that I see.