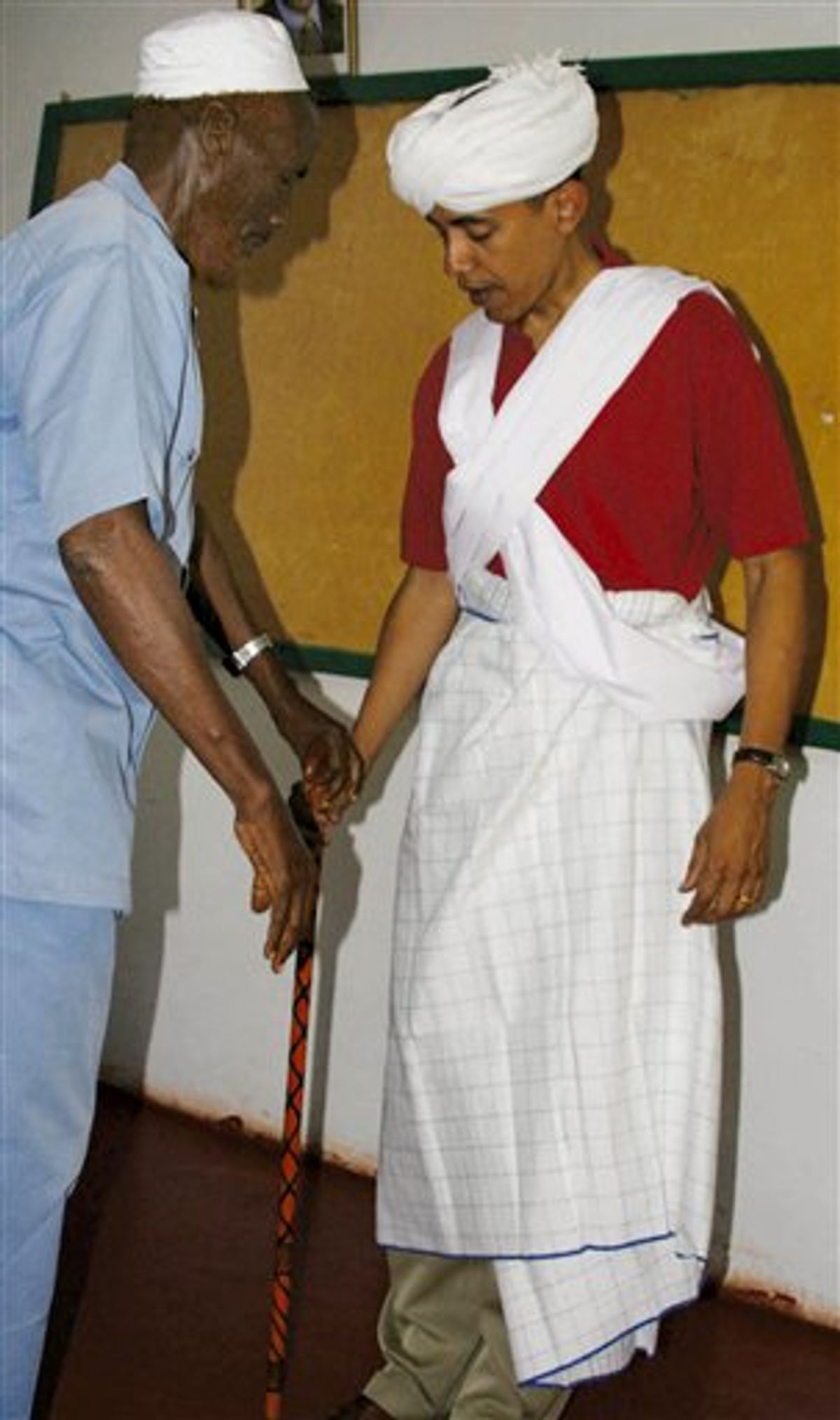 FILE - In this 2006 file photo, then-Sen. Barack Obama, D-Ill., right, is dressed as a Somali Elder by Sheikh Mahmed Hassan, left, during his visit to Wajir, a rural area in northeastern Kenya, near the borders with Somalia and Ethiopia. All presidents deal with image problems _ that they're too weak or too belligerent, too far left or far right. But Obama also faces questions over documented facts. Nearly one in five people, or 18 percent, said they think Obama is Muslim, up from the 11 percent who said so in March 2009, according to a poll released Thursday, Aug. 19, 2010. The proportion who correctly say he is a Christian is down to just 34 percent. (AP Photo, File) (AP)
--

An August Pew poll found that a growing number of Americans -- 18 percent -- falsely believe that President Obama is a Muslim. Why does that figure keep rising? It's a difficult question, but it may partly be explained by the remarkable success of videos like this one, which has racked up over 2.5 million views in just three months on YouTube. It's titled, ""BREAKING NEWS! - Is Barack Obama Really A Saudi / Muslim 'Plant' in the White House?"

The thrust of the video, put up by YouTube user ppsimmons, is this: The wife of an American-born Israeli author, Avi Lipkin, monitors the Egyptian media. She saw a broadcast in which the Egyptian foreign minister said that Obama personally told the him that Obama is a Muslim -- and that the president is hiding that fact (and also that he is going to betray Israel).

All of this is narrated not by Lipkin, but by an unidentified man (possibly the YouTube user). Lipkin, who sometimes using the alias "Victor Mordecai," is a former IDF spokesman and current right-wing speaker and writer on Islamic terrorism. He told Salon in an email that the YouTube video is an accurate portrayal of his beliefs.

"My wife, Rachel, has been listening to the Arabic language media from her office in Kol Israel Radio in Jerusalem, and this is just the tip of the iceberg," he said. "It is ironic, because the whole Islamic world knows the American president is a Moslem. The only ones who don't know it or want to know it are the Americans, themselves."

There is no evidence presented that this Egyptian interview ever happened. And the YouTube video itself (which was apparently put up not by Lipkin, but by one of his fans) could well be the product of a lone conspiracy theorist. Which makes it all the more remarkable that it has racked up 2.5 million views.

The referral data accompanying the video shows that it has been overwhelmingly viewed in the United States and has circulated primarily through email (the main referral domain is mail.yahoo.com), rather than, say, right-wing blogs. This is a true viral video. No one should be surprised if that Pew poll number keeps inching upward.