He's proud that he made decisions. Just don't ask him to reflect on any of them 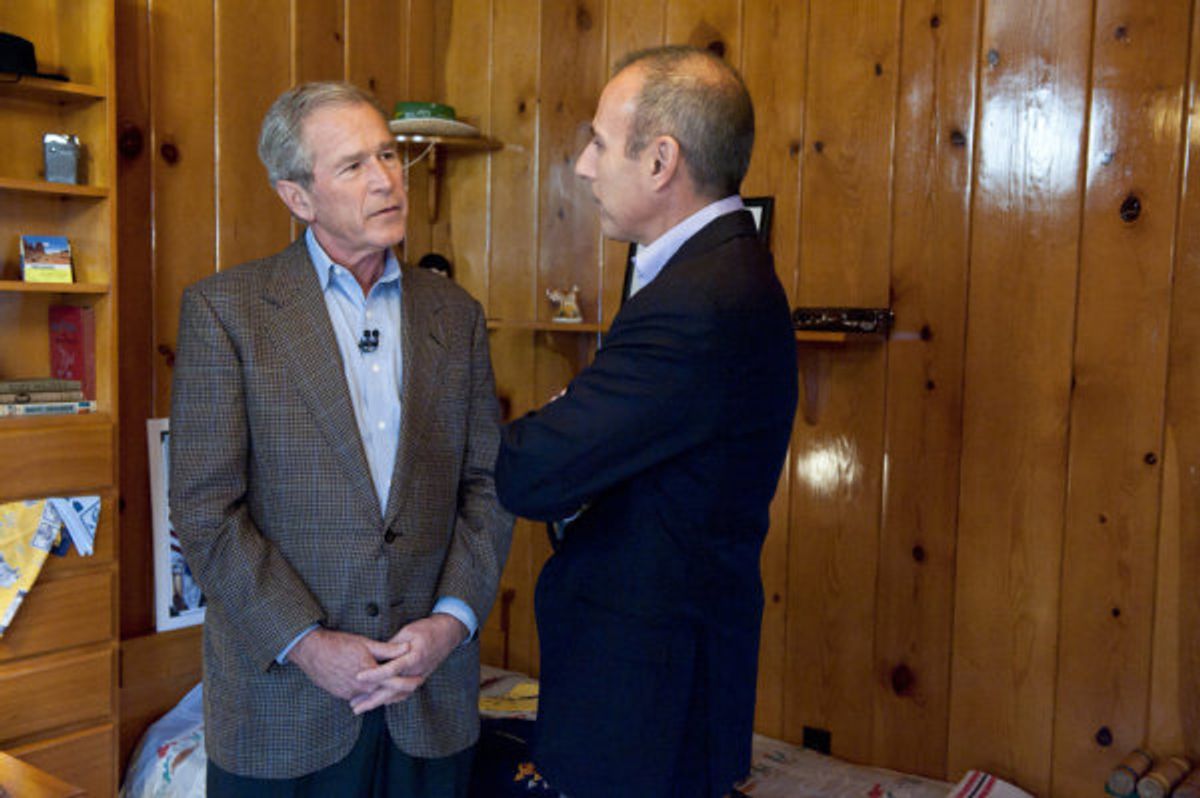 By the time it aired Monday night, the suspense and anticipation had been drained from Matt Lauer’s interview with George W. Bush. Viewing the heavily edited, hour-long (with commercials) primetime special merely confirmed what all of the leaks that preceded it suggested: The self-styled “Decider” is as maddeningly unreflective as ever, confident that he got all of the important stuff right as president and unwilling to cop to mistakes that involve anything more serious than optics.

Thus, picking Dick Cheney as a running-mate in 2000 was "a very good" decision and refusing Donald Rumsfeld’s resignation in the spring of 2004 "was the right decision." Waterboarding wasn’t torture "because the lawyers said it was legal" (and because "I’m not a lawyer"), he "really didn’t" have any doubts about the pre-war intelligence on Iraq and WMD, and “we just didn’t have any solid intelligence” warning that 9/11 was possible. Oh, and the idea that his administration could have done something between 2001 and 2008 to prevent the Wall Street meltdown? "I frankly don’t think this was a crisis of a lack of regulation."

The introspection, self-flagellation and frank admissions of failure were reserved for weightier decisions, such as: standing in front of that “Mission Accomplished” banner in May 2003, observing the Katrina disaster from the comfort of Air Force One, and telling Michael Brown that he was doing “a heck of a job?” That’s the kind of interview this was. Which shouldn’t have come as a surprise, because, hey, that’s the kind of president George W. Bush was. As Jon Stewart once put it, the message of his presidency always seemed to be, “I drove you into a wall -- but at least I didn’t blink!”

The most interesting part of the interview came early on, when Lauer brought up Bush’s boozing days. Bush recalled drunkenly asking an older woman at a dinner party at his parents’ Kennebunkport home, “What is sex like after 50?” an incident that apparently helped convince him to give up the bottle for good as he turned 40. “I haven’t had a sip of alcohol since 1986,” Bush told Lauer, at which point Lauer’s narration noted that eight years after that last sip, Bush was elected governor of Texas. And from there, the presidency wasn’t far off.

It’s fitting that the Bush interview aired one night after HBO’s Prohibition-era drama “Boardwalk Empire” depicted the spectacularly underwhelming Warren G. Harding’s surprise coronation at the 1920 Republican convention: No one after Harding, the lucky beneficiary of a tenth ballot convention compromise (and. after that, a general election climate poisoned against Woodrow Wilson and the Democrats), did less to deserve the presidency -- until Bush came along.

It’s not just that he was a screw-up until he was 40; there’s also the odd circumstances of his 1994 victory in Texas: The Democratic incumbent he beat, Ann Richards, had an approval rating of 60 percent on Election Day. Bush was saved by the national atmosphere, which was tilted dramatically against the Democrats. In any other year, Richards would have beaten him, and that might have been it for W’s political career. And once he won it, it’s not like the Texas governorship was much of a proving ground. Constitutionally, it was and still is the weakest in America. When set out to run for president in 2000, he’d still proven nothing, except that he could raise money and, under certain circumstances, project a likable personality.

He was, in other words, completely ill-equipped to make the decisions that he spent most of the NBC interview defending. This is hardly a new observation, of course, but there’s something about watching Bush justify all of his actions as president with one simplistic observation (“We didn’t have an attack” after 9/11) that forces you to shake your head in amazement all over again that he ever wound up in the Oval Office.

During one commercial break, NBC ran a promo for Brian Williams’ upcoming interview special with Prince Charles -- “The Man Who Will be King.” The Charles/W parallels are obvious: Two men who abused their inherited wealth and privilege before finally growing up a little later than most of their countrymen. But the position Prince Charles is being groomed for is ceremonial. The one Bush’s name and family connections landed him in was all too real.