The Limbaugh/Bush interview you've been waiting for

Was there an over/under on the number of times the term "Democrat Party" would be invoked? 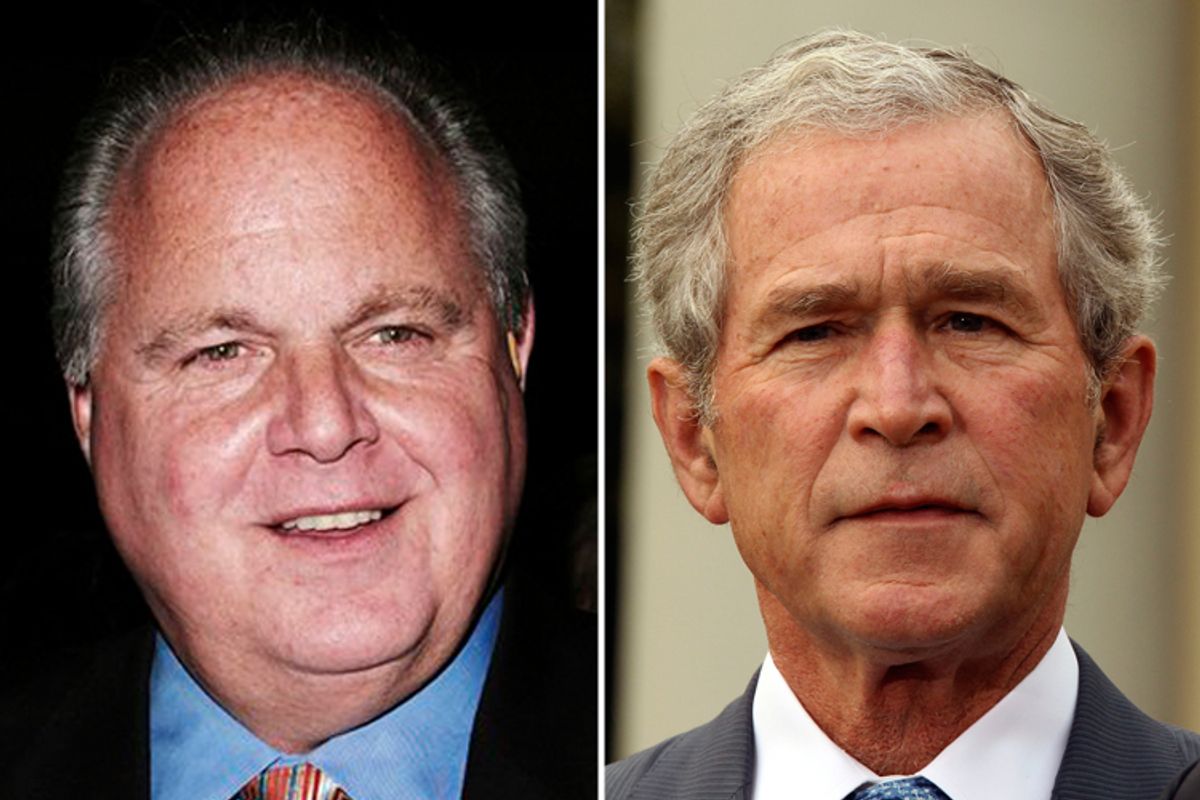 The live, 25-minute interview that Rush Limbaugh just conducted with George W. Bush was, not surprisingly, marked by excessive flattery and deference and a complete lack of follow-up questions. If anything, it resembled the weekly radio show of a college football coach, in which a professional-sounding host is paid to good-naturedly lob softballs and never -- ever -- offend the interview subject.

The closest Rush came to putting the former president on the spot was his response to Bush's defense of his "comprehensive immigration reform" initiative (a term that Rush himself, perhaps for the first time ever, used without sarcasm). "Many people," Limbaugh told Bush, "thought the Democrats wanted to register these people as new Democrat voters." Bush said he was aware of this but that he thought comprehensive reform was "good policy" anyway.

If there was one dominant theme in Limbaugh's questions, it was the mean-spiritedness of "the Democrat Party" -- and the admirable, almost superhuman restraint that Bush has shown in not lashing back at his foes. Limbaugh brought up Harry Reid's 2007 statement that the war in Iraq was "lost" and reminded Bush that Democrats back then were "opposing their country," "seeking defeat," and challenging his and his administration's truthfulness. How, he inquired, were you able to resist going after them?

Which gave Limbaugh a chance to slam Barack Obama, who, he suggested, has been demeaning the presidency. "The current occupant [of the White House] constantly runs around saying, 'I inherited this mess from you!'" Limbaugh exclaimed.

(Apparently, Rush is unaware -- or unconcerned -- that Obama was actually following in the footsteps of Ronald Reagan by doing this, and that the Gipper spent the 1982 midterm campaign season blaming Jimmy Carter for the country's economic woes. "Our critics are saying our economy is on its knees," Reagan said at an '82 campaign rally. "Well, you know something, if the economy is back on its knees, that's quite an improvement because two years ago it was flat on its back.")

What else did we learn from the interview? Well, apparently Bush and Rush are golfing buddies. "I hear that your handicap is getting better now that you’re married," Bush kidded the host at one point. Also, both men agreed that the financial crisis was a result of "the Democrat Party" and its policies toward Fannie Mae and Freddie Mac, and Bush insisted that stories about him privately taking shots at Sarah Palin are baseless.

Rush's warm tone can mostly be chalked up to ideology, of course. But it is worth noting that he's always seemed to have a special fondness for the Bush family. It was back in the spring of 1992, don't forget, when George H.W. Bush, then facing a tough reelection campaign, invited Rush to the White House -- and made a playful show of meeting him outside to carry his bags in. On the day before the 1996 presidential election, both H.W. and W. made appearances on Limbaugh's show (though it was mainly because Bob Dole, who was at a rally in Texas with both of them and being interviewed by Rush, handed the phone off to both of them). And then there was 2000, when Limbaugh was instrumental in convincing conservative activists that John McCain was an ideological traitor and that they should stay with Bush even after his 20-point loss in the New Hampshire primary.

Limbaugh has defined himself as a voice of the rights's grass roots, a pure conservative ready and willing to do war with RINOs. But his interview with W. was one more reminder that, for whatever reason, the Bushes are one Republican establishment family he's willing to make excuses for.