I blame Craigslist for my stinky bed frame

The website has been raked over the coals for many reasons, but my biggest gripe? Smell 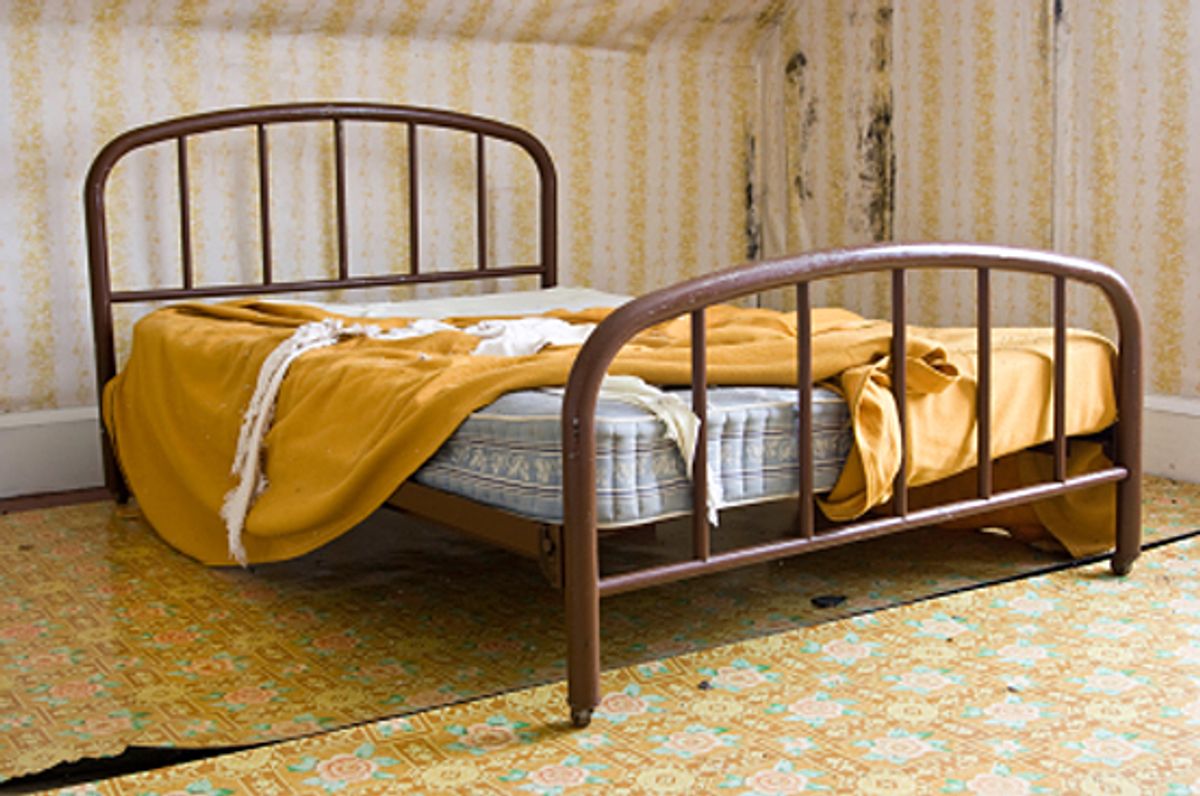 Craigslist needs stricter oversight, and I'm not talking about making it spam-proof or sheltering the squeamish among us from some of the, uh, stickier aspects of humanity. For nearly two years my husband and I have been sleeping in a mildewy bed, and I blame Craigslist.

My husband's nose apparently can only detect the odor when I push his face right up to the frame and command him to Sniff harder, dammit!, but every night I am welcomed to sleep by the unmistakable smell of fungus from someone else's bad storage decision. I know, honey, let's store the old bed in that corner of the basement we never use because of all the standing water!

If Craigslist cannot be held accountable for allowing the stench to waft into our home, I have to take responsibility myself, and what self-respecting American does that? Sure, I'm the one who found the bed frame online, the one who convinced my husband it was nicer than the one we were using, the one who stood in a random Seattleite's furnace room and forked money over for its sleigh-style splendor -- but I'm not the one who created the scent-free forum that allowed the stinky item to be sold to me.

I knew something was wrong the moment we propped the pieces of the frame up against the bedroom wall. Suddenly our room smelled musty -- very musty -- like a swimming suit left for dead at the bottom of a locker or an umbrella that's never been allowed to air-dry or a piece of wood furniture that's been stored for a few years in a Pacific Northwesterner's basement.

"Do you smell that?" I asked my husband, wrinkling my nose for emphasis as we carried the final pieces of the frame into the house. He didn't but suggested the supposed scent might be coming from one of the towels in the bathroom or the leaves on the roof or -- and this he didn't say so much as imply -- maybe it was coming from my overactive -- and at the time, pregnant -- imagination, some sort of olfactory hypochondria.

I've been plagued by a hypersensitive nose forever -- long before I got pregnant. When I was 5 my family went to the new Chinese restaurant in town for dinner, and all through the meal I insisted that I smelled mints. My mom and dad were concerned, wondering what was wrong with this child who could not differentiate between mu shu and mint. But when my mom went to the cash register to pay the bill she discovered an urn of dinner mints, and with that my nose gained the respect of my parents.

My husband -- an emergency room doctor and trained skeptic about any complaints short of "I have a headache from this chef's knife lodged in my skull" -- has been a harder sell. He seems to believe that if he's not tired, no one should be tired; if the undercooked chicken didn't make him sick then it can't possibly be the reason you're feeling iffy; and if he can't smell something it doesn't really smell.

My husband and I put the new bed frame together, and in a rare fit of expediency I summoned Salvation Army the next day to cart off the old bed -- the one my husband happened to have shared with countless untold others before me, not that that was why I wanted to get rid of it -- no, I just liked the new (used) one better!

That night we undressed and climbed into our new-to-us bed and snuggled in under the duvet. My husband  pulled me in close and whispered, "You're right. This bed is definitely nicer than the old one."

"Mmmmm," I murmured, trying not to breathe through my nose.

When it became clear that the odor wasn't coming from a towel in the bathroom, I convinced myself the frame just needed to air out for a few days. Or maybe a few weeks?

I'd recently bought a stroller from a nice Russian woman off Craisglist and somehow hadn't noticed that it was infused with the aroma of piroshki until I got it into my own house -- but it faded after a month or two.

After four months it became clear that wishful thinking wasn't going to work for the bed. I tried Murphy's Oil Soap, which was great at masking the mildew with a bouquet of chemical lemon for a few hours. Too humongously pregnant to do it myself, I made my husband swab the entire frame with a baking soda paste. This unfortunately didn't take away the mildew scent so much as call forth an underlying essence of stale cigarettes -- which was when I knew the bed needed to go for sure.

Unfortunately, I was also too humongously pregnant to assemble -- or disassemble -- a bed by that point, and my frugal husband who would always prefer that if money is going to be spent it be spent on having an adventure, not acquiring a thing, was not about to take the lead on buying another bed.

Soon enough we had a newborn on our hands, and for months I was too sleep deprived to even notice the smell. When I did notice, I was too tired to care.

I should have been banned from buying used furniture long ago. Something happens to me when a stranger from Craigslist welcomes me into her home and introduces me to, say, her wheelchair-bound war-vet husband and guides me downstairs past three generations of mixed-race family portraits to the playroom where the grandchildren frolic amid family heirlooms. No matter how rickety or malodorous the item is, I become incapable of saying, "No, thanks." I don't even notice the fustiness or the scuffs or the chipped legs. All I require is a tiny bit of Midwestern-style "come on in and have a cup of Folgers" friendliness and suddenly I'm forking over fistfuls of 20s for furniture that a person should have to pay to have taken away.

Before the baby had arrived and I was outfitting the nursery, my husband politely requested that I stop running items past him for his approval. His e-mail in box couldn't take the onslaught anymore. I trust you, he said -- and therein lies the problem. Without him mistrusting me I end up buying, oh, say, a cheaply constructed dresser painted the exact shades of late-'80s-forest-green and fluorescent urine yellow as my junior high P.E. uniform. When I came home with this hideous -- not to mention overpriced -- ­monstrosity, my husband glanced up from his overflowing in box and generously observed, "The knobs are nice."

The knobs were not nice -- but at least the dresser didn't reek.

I sighed wearily and added "Sell dresser on Craigslist" to my as-pregnant-as-I-was to-do list, just below "figure out how to give birth" and just above "make peace with sleeping on a mattress on the floor for rest of life."

"Please don't trust me on these things," I beg my husband. Even he could detect the flowers-made-in-a-factory stink of Febreze on the leather club chair I bought off Craigslist when I moved into his house two years ago.

"We totally need to get rid of that thing," he finally said yesterday as he walked past the chair for the millionth time, wrinkling his nose for emphasis. Of course we do. I've been wanting to get rid of it ever since it became clear that the sickly sweet stench of Febreze will dissipate from leather the day that I can no longer discern dinner mints at a Chinese restaurant or mildew on an ill-begotten bed.