If you've ever experienced a really rapid descent, you know how startling it is. Here's what's happening 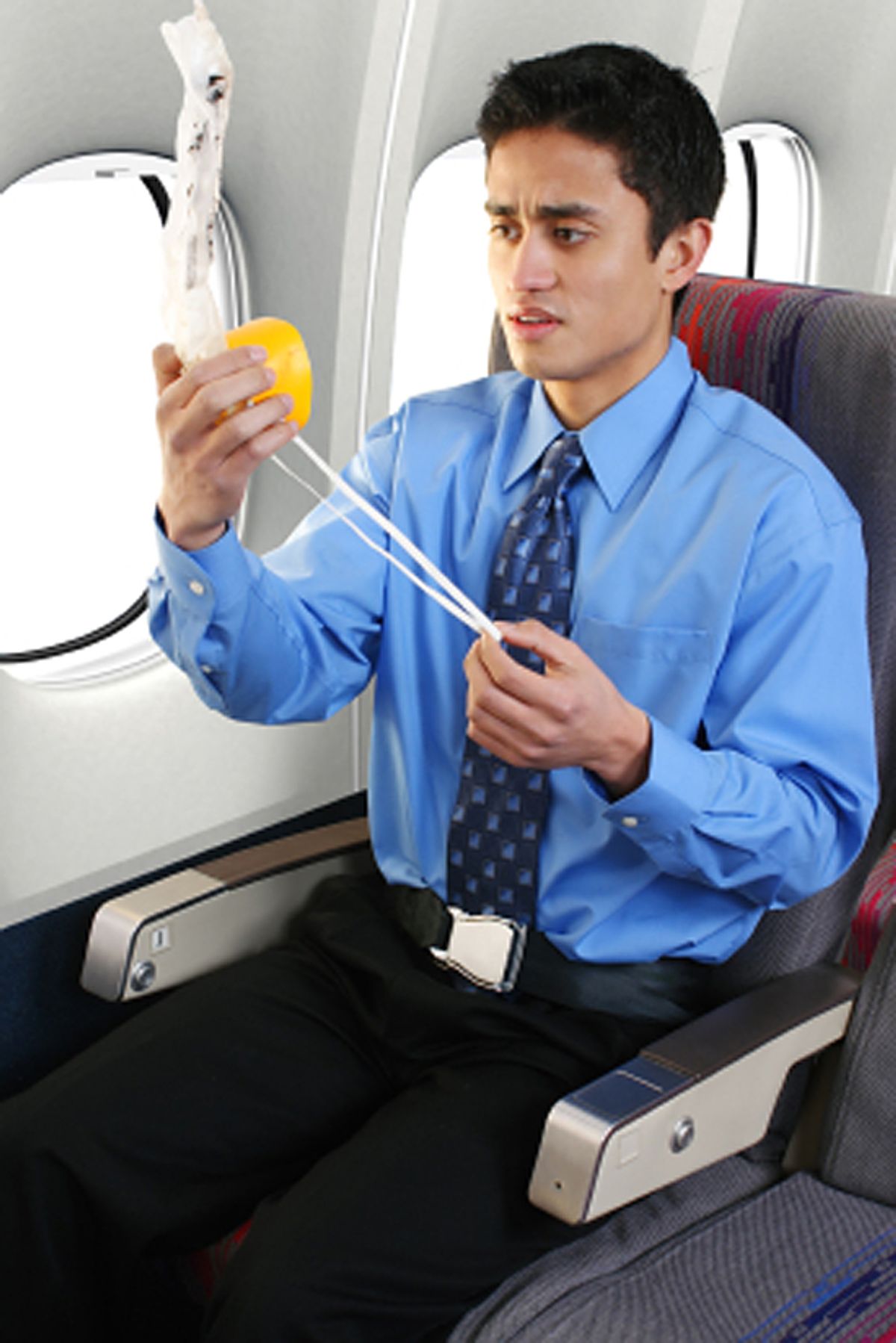 Last week's engine failure involving a Qantas A380 wasn't the only overhyped airplane story of late. A few days earlier we were hearing about the American Airlines flight that made an emergency landing in Miami after a fuselage rupture caused a sudden loss of cabin pressure. I was set to discuss this incident until Qantas stole its thunder. It still deserves a look, so here's a belated recap.

The Boston-bound flight depressurized shortly after takeoff. A hole measuring approximately 1-by-2-feet was later discovered near a forward cabin door of the Boeing 757.

I'm sure they were, and any breach of a jetliner's fuselage is a serious matter. Nevertheless, this was hardly the near catastrophe reports were making it out to be.

Let's start with a review of pressurization.

The cabin is pressurized so that passengers and crew are able to breathe normally, without the need for supplemental oxygen. Pressurization squeezes the thin, high-altitude air back together, replicating the more dense, oxygen-rich conditions that are found closer to sea level. During cruise, depending on the exact altitude, there is a pressure differential of somewhere around 8 pounds per square inch between the cabin and the atmosphere outside. In other words, you've got around 8 pounds of force pushing against every square inch of the fuselage. (This is one of the reasons it is physically impossible for somebody to open a cabin door during flight; the doors are like drain plugs, held secure by more weight than any person could overcome.)

As a plane climbs and descends, the level of pressurization will change, and is modulated by something called an outflow valve. I always find it funny when the pre-takeoff safety briefing includes the line, "If cabin pressure should change, an oxygen mask will drop ..." They used to say, "In the event of a loss of cabin pressure ..." but apparently this was deemed too scary. Scary, but a lot more accurate, because in fact cabin pressure is changing all the time.

Changing is one thing. Escaping uncontrollably is another. Introduce a sudden hole or leak into the picture, and you've got a problem; loss of pressure means loss of oxygen. If the leak is serious enough, the plane can depressurize completely. Essentially there are three types of depressurization: gradual, rapid or explosive. The first two are fairly common and easy for a crew to handle. The American Airlines incident over Miami was, at worst, a rapid decompression.

The first thing pilots do in such a scenario is pretty straightforward: They don their cockpit oxygen masks and commence a rapid descent to an altitude no higher than 10,000 feet. Even with a total pressure loss there are several minutes of supplemental oxygen available for both passengers and crew, but the protocol is always to get down as quickly as possible. When the passenger above spoke of "descending really fast," this isn't because the plane was crashing, it was because the crew was doing what it was trained to do. I'm sure it was startling, but a high-speed emergency descent is well within the capabilities of any aircraft and not, by itself, unsafe.

If, at some point during all of this, cabin pressure falls below a certain threshold -- usually the equivalent of 10,000 feet -- the passenger masks will deploy from the ceiling, exposing everybody to the so-called rubber jungle. This is typically the point where people begin shrieking and picturing their loved ones, but try to relax. The masks are there to assist you; the plane will be at a safe breathing altitude in just a few minutes. And 10,000 feet, the deployment trigger height, isn't very high; in most depressurization incidents you could ignore the masks entirely with no ill effects (not that I advise doing so).

A few months ago I was working a flight from South America to the U.S. All was quiet, high over the Caribbean, when suddenly there was a loud whooshing sound that seemed to come from nowhere and everywhere at once. I could feel my ears popping, and, sure enough, a glance at the instruments showed we were rapidly losing pressurization. The captain and I put our masks on, took out the quick-reference manual and began to troubleshoot. Part of that troubleshooting involved a rapid descent to 10,000 feet. Commencing such a drop is a multi-step process: set 10,000 in the altitude window; select "flight level change" from the autoflight panel; increase the speed command to a point slightly below maximum; deploy the speed brakes; retard the thrust levers to idle. To the passengers behind us, I'm sure it felt like a roller coaster, but everything was carefully coordinated. The autopilot was still engaged, and no limits were exceeded.

As we descended -- or plummeted, as the passengers probably saw it -- I kept an eye on the cabin pressure gauge. As the plane itself was falling, the equivalent cabin altitude was climbing. At a certain point, if we didn't get down fast enough, the rubber jungle was going to deploy automatically and, I'm sure, at least a few people were going to panic.

But we did get down, and the masks remained tucked in their cubbyholes.

Unfortunately, neither of the backup pressurization modes worked properly. Fuel constraints made it impossible to finish the flight at 10,000 feet, and so we wound up diverting. We were replaced with a new crew and the passengers were swapped into a different plane.

We didn't make the papers, but almost anything is fair game these days, and I suppose we could have. We had a technical problem followed by a startlingly fast descent, followed by a diversion. Sounds like a good story, except there was never any emergency, and little to no danger.

Incidentally, should a pressure loss occur over mountains or so-called critical terrain, pilots will follow predetermined depressurization routes (sometimes called "escape routes") that allow for a timely, if more gradual descent. Even if crossing the Andes or the Himalayas, there is always the opportunity to reach a safe breathing altitude before supplemental oxygen runs out.

Now, as maybe you noticed, I haven't yet addressed that third kind of decompression: the explosive kind. Here the big thing isn't the loss of pressure, per se, but the danger of resultant forces seriously damaging or destroying the plane. Bombs, for example, can tear apart an entire fuselage in fractions of a second. A bomb alone doesn't (necessarily) bring down a plane; the explosive decompressions caused by a bomb bring down a plane. See Pan Am 103, et al. Large-scale structural failure, like the infamous fuselage burst of an Aloha Airlines 737 in 1988, in which a flight attendant was killed and the plane nearly lost, can be similarly disastrous.

But those are extremely rare occurrences, and that's not what happened to American. This breach was a relatively small one, and once the cabin pressure had equalized it could be reasonably assumed that the plane was going to stay in one solid piece and fly just fine. Which it did. I can understand why people may have panicked, but they were never in significant danger.

Which is not to downplay the potential seriousness of an unexplained hole. Any structural breach is cause for alarm. So where did that 1-by-2-foot tear in that 757 come from? Good question. Was it metal fatigue? A faulty earlier repair? Had there been damage from an unreported collision with ground equipment? For now the cause is unknown.

Addendum: A note to my readers in and around Boston ...

There will be a showing of Fred Gevalt's TSA documentary "Please Remove Your Shoes" at the Regent Theatre in Arlington, Mass., Nov. 10 at 7:30 p.m. There will be Q&A afterward with Gevalt and the other filmmakers.