Michael Bloomberg and the myth of corporate genius 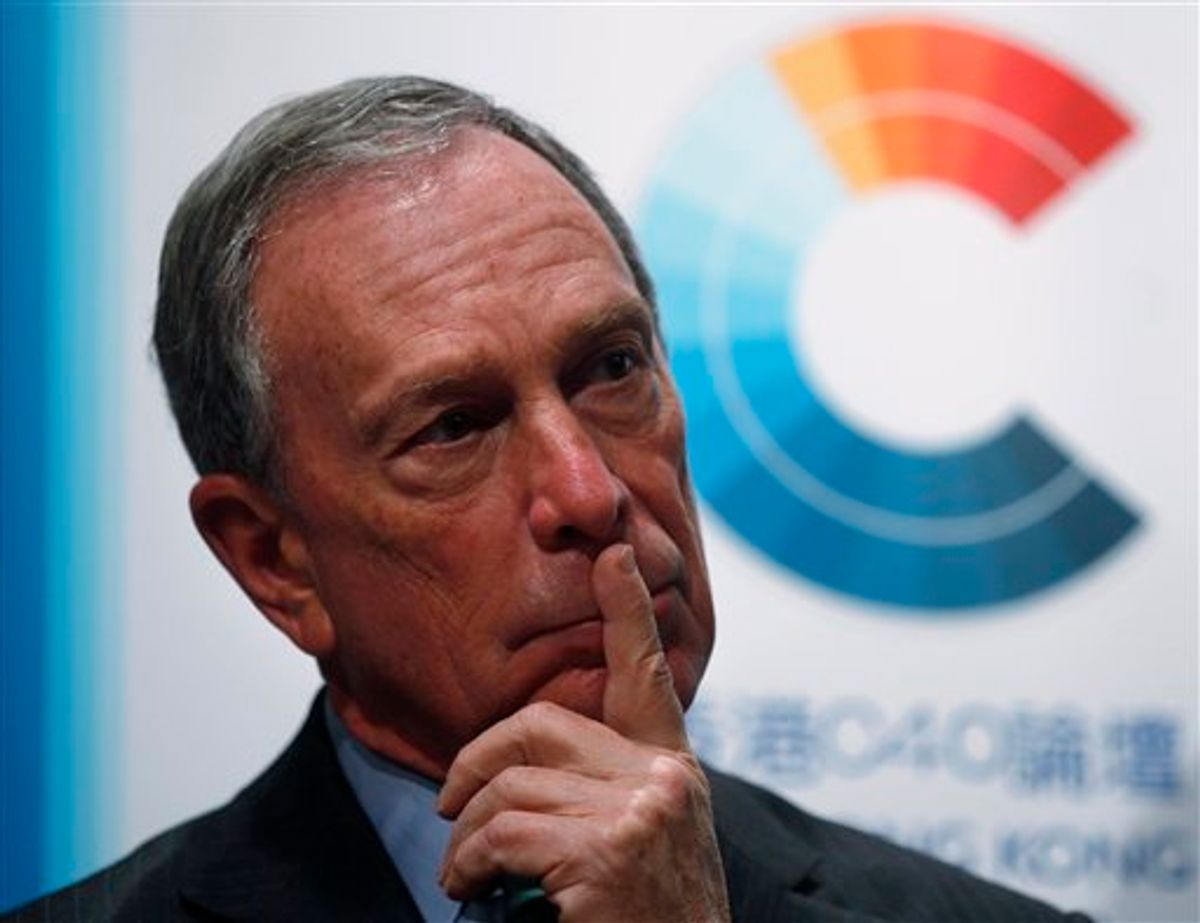 New York City Mayor Michael Bloomberg attends a news conference in Hong Kong Friday, Nov. 5, 2010. Bloomberg has praised Chinese cities for taking part in a climate change coalition that he is set to lead, saying he is heartened that they are no longer blinded by the pursuit of economic growth. (AP Photo/Kin Cheung) (AP)
--

New York is well into Michael Bloomberg's formerly illegal third and -- we're told -- last mayoral term, and now that the billionaire independent mayor has no need to seek reelection, he can finally rule the city as the utopian public-private partnership of his dreams.

This week? He let his longtime schools chancellor go to Rupert Murdoch's News Corp. And who did the mayor who's staked his entire legacy on education look to to replace Joel Klein? Cathleen Black, a woman with lots of experience... in publishing. The chairwoman of Hearst Magazines. Like, "Cosmopolitan" Hearst Magazines. And before Hearst, the publisher of USA Today.

She's got, needless to say, no experience in education, Or public service. Ms. Black even attended parochial schools as a child. In Chicago. She's had no reason to set foot in a New York public school in her entire life. And now she's in charge of them.

When a regular politician hires a completely unqualified friend for a government job it's called cronyism. When Michael Bloomberg, hero of the moderate pundit class, does it, it's bringing "management sensibility" to government. Because if there's once place Americans can look to in these times for innovation and forward thinking, it's the magazine industry! (And Hearst is not even Conde Nast.)

The fantasy of the superstar CEO who can parachute into any company -- in any industry -- and right the ship through time-tested management techniques is common in corporate circles, but so are books of New Yorker cartoons about golf. Only the sort of lucky billionaire convinced of the moral superiority of the financially successful would assume that a random executive with no education experience could manage the New York city public schools better than someone who... you know, has experience managing public schools.

We're two terms into mayoral control of the New York schools and not much has changed -- besides the fact that fewer black students are attending the better public high schools. What looked like soaring test scores turned out to be a sham. The idea of Cathleen Black reversing those trends (through effective management!) is laughable, unless you subscribe to the religion of private sector superiority.

The appeal of Bloomberg to his Democrat-voting, comfortable, educated Manhattan base is that everyone assumes he's quietly a Democrat who -- unlike the actual Democrats -- isn't beholden to New York's various special interests (unions and minorities), who are generally presumed to be the reason why managing the city is so damn hard. But this sort of move -- along with his steadfast support for unaccountable authoritarian police commissioner Ray Kelly -- demonstrates contempt for all New Yorkers who don't summer in the Hamptons. This isn't a cold, evidence-based approach to city management. There's no "evidence" here beyond a rich man's conviction that things would be better if only everyone in charge of everything were more like him.

The problem with public schools, inasmuch as there is a problem, is a problem of poverty. The idea that an injection of profit motive is all we need to become Finland is an idiotic daydream inexplicably beloved by supposed do-gooding liberals. At least this appointment is so nakedly wrong that it may shut up the "Bloomberg for president" speculation -- for a week or two.