By his own criteria (applied this week to George Soros), the conservative host seems poised for a major coup 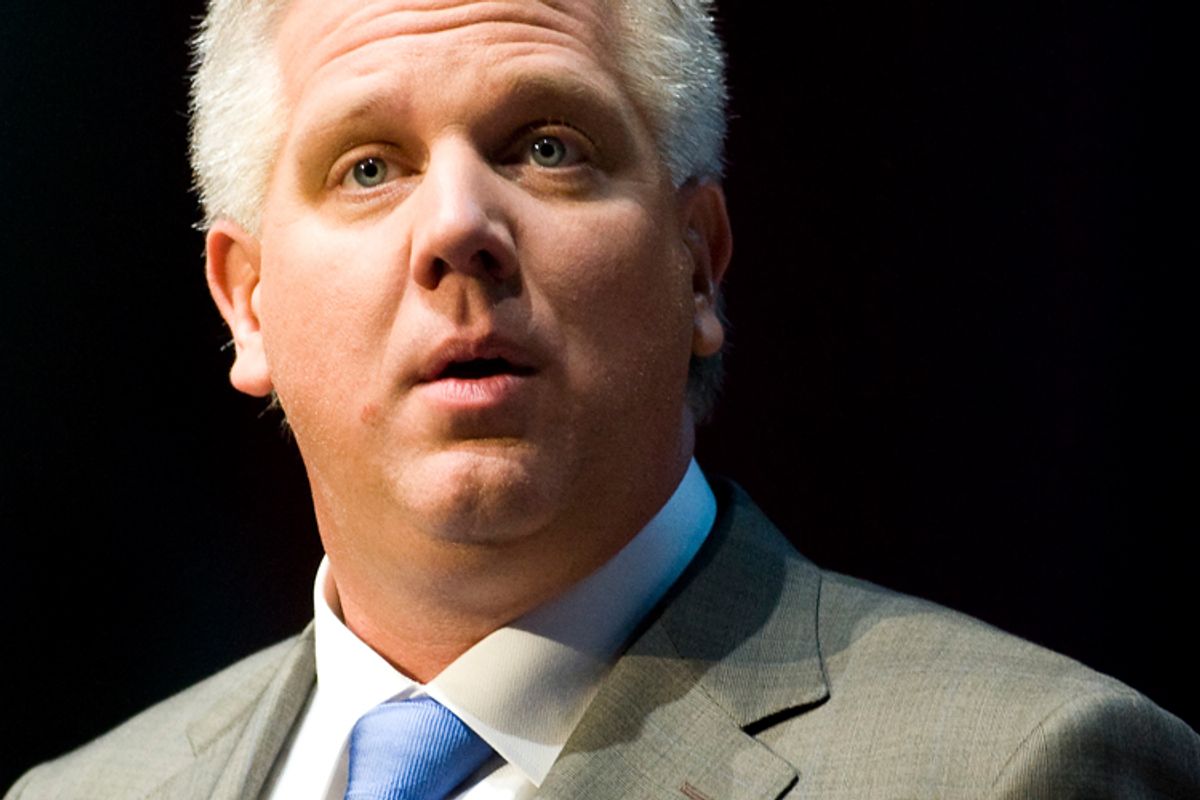 In Tuesday's first installment of his series on George Soros' supposed quest for world domination, Glenn Beck accused the billionaire of -- among many, many other things -- following a five-point "formula" to gain control of the United States. You can watch the performance here, starting around 2:20.

What's most striking about this is that, if you were so inclined, it wouldn't be that hard to accuse Beck himself of following pretty much the same five-point program that Soros is supposedly pursuing. Judge for yourself -- and, as Beck tells his viewers, feel free to "question with boldness":

Here, Beck is referring to Soros' role at the Open Society Foundations, and specifically the Open Society Institute, which is based in the U.S. It's true that Open Society Foundations in European countries have supported revolutions -- such as the Velvet Revolution in Czechoslovakia and the Orange Revolution in the Ukraine, both of which were widely praised by Western democrats -- but there is absolutely no reason to believe that the Open Society Institute has similar plans for the United States. And, in any case, Soros' first foundations were started in the 1980s, with the specific goal of targeting Communism in Central and Eastern Europe. (Yes, Glenn Beck, they helped to end Communism.)

Anyway, speaking of shadow governments: Couldn't we apply that term to the role that Fox News -- which, in case you missed it, now employs just about every major prospective opposition party presidential candidate -- has been playing since January 2009?

Beck claims Soros seeks to control (and succeeds in controlling) American news organizations, in order to force his own ideas down people's throats, and, of course, pave the way for an ascent to power. In reality, Soros' contributions to some of the media outlets Beck names -- for example, NPR -- are minimal. (Soros' recent gift of $1.8 million to NPR accounts for 1.1 percent of its annual budget.)

But when it comes to media domination, maybe it's Beck himself that we should be more worried about. His ideas are broadcast in a variety of formats -- radio, television, print -- and reach astronomical audiences. (His radio audience is over 10 million, his TV audience has been known to exceed 3 million, and, as of this June, his collected works had sold close to 5 million copies in the U.S. since 2003.) If anyone is seeking to lead a revolution by "controlling the airwaves," surely he would be a prime suspect.

3. Destablize the state by compromising the economy.

Beck's former role as a spokesman for Goldline, the gold and silver retailer, has been well publicized, and it arguably constitutes just as much of an attempt to take advantage of an economic crisis as anything Soros has done. (Beck complains mostly about Soros' support for government spending.) Beck has directly and indirectly encouraged his viewers to buy gold from a company that is currently being investigated by Congress and defending itself against charges of "deceptive advertising and deceptive sales techniques" in a class action lawsuit. As Deni Edwards explains on HubPages:

"Goldline sponsors many of the conservative talk shows on Fox News and pays talk-show hosts to entice people into investing in gold, by banking on viewers’ fears of the state of the economy, a possible collapse of the federal government, and informing viewers that the government may confiscate all of their belongings including their gold, with the exception of gold collectable coins, of course."

4. Provoke an election crisis ("wait for an election," then "cry voter fraud").

Are you kidding? Beck warned his viewers of potential voter fraud in the run-up to Nov. 2, telling them they should "expect" both "fraud" and "intimidation." Then later, as Media Matters has shown, he slammed a group linked, through the Texans Together Education Fund and Open Society, to George Soros, for itself accusing a Tea Party-linked group of intimidating voters. He likened Soros to Al Capone for attempting to sway elections through voter-fraud complaints -- even when Soros was only tangentially linked to the body complaining of intimidation in Texas. Since Beck, unlike Soros, warned people of voter fraud explicitly, even accusing Google of scheming to stop people from voting, can we assume his motives are even more dastardly?

You are familiar with the Restoring Honor rally, aren't you?