Meet the leader of the Obama witch hunt

If past is prologue, Oversight Chairman Darrell Issa will aim low and cheap -- by probing stimulus road signs! 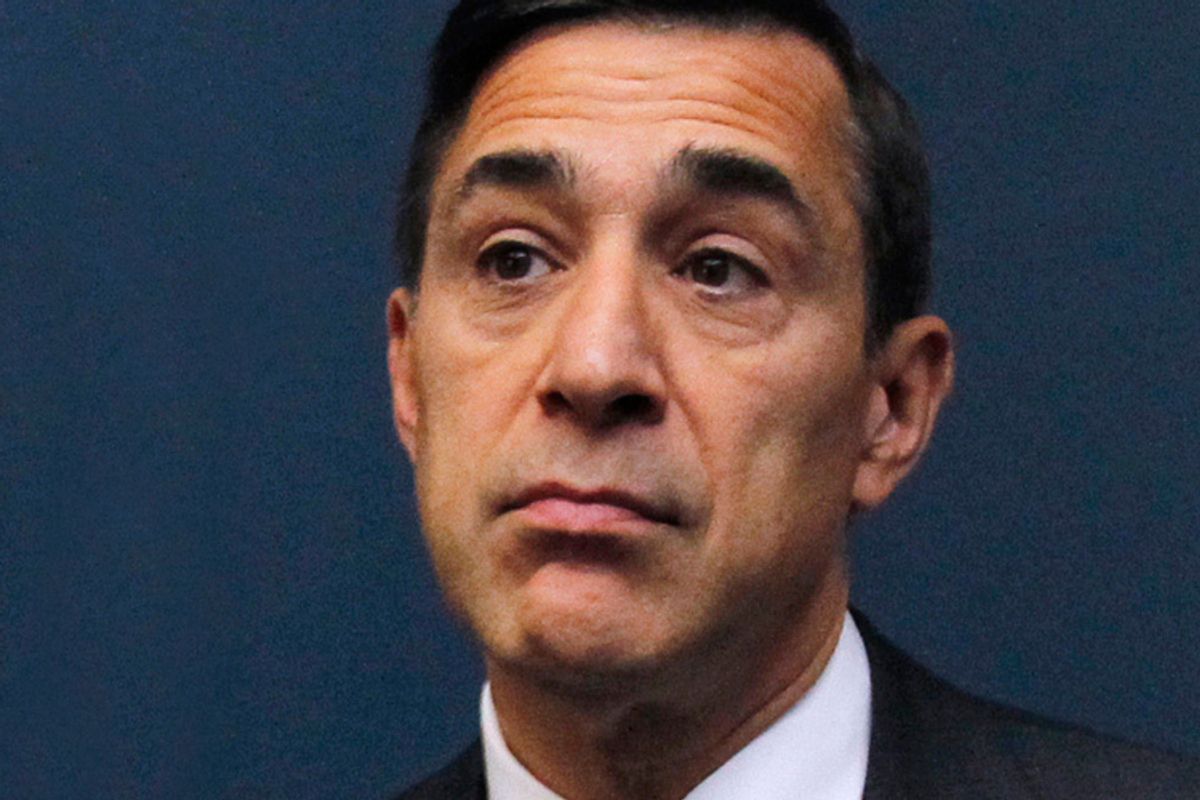 How Darrell Issa will conduct the vital business of the House Oversight Committee when he takes over as chairman isn't clear yet. When the California Republican describes his plans in the mainstream media, he strives to sound reasonable, bipartisan and public-spirited; but when speaking with media outlets and personalities, such as Rush Limbaugh, he sounds like a hard-line right-winger aiming to revive the paranoid partisan style of the Gingrich era -- which would be more in keeping with the reputation he has already established. He displayed the fugue state that preoccupies him when he denounced President Obama on CNN as "the most corrupt" occupant of the Oval Office in modern times – and then withdrew that accusation with an apology.

Now Issa has announced that he expects the Oversight committee and its subcommittees to hold nearly three times as many investigative hearings over the next two years as Henry Waxman, an active and successful chairman, ran during the final years of the Bush administration. He may consider the federal government (and the White House) to be bottomless pits of waste, fraud and abuse, but are there really three times as many troubling issues for Issa and his colleagues to study now as there were in the Bush years?

The answer is yes, so long as the threshold for investigation is absurdly low, such as the question of whether federal agencies are spending too much money on signs to identify construction projects funded by stimulus money under the American Recovery and Reinvestment Act.

Road signs displaying the names of various government officials and agencies are neither new nor scandalous, but local Republicans have been whining about the erection of signs bearing the president’s name and the Recovery Act logo as examples of Soviet-style propaganda. For months, Issa has been riding this issue, promoting stories in local newspapers that suggest waste, wrongdoing and political misuse of funds, with hints that the Recovery Act symbol bears a suspicious resemblance to the 2008 Obama campaign logo. Last August, World Net Daily, which did so much to promote phony scandals a decade ago, urged its gullible readers to "report" the ARRA signs to Issa's office (under the byline of the foul-mouthed Swift boat hoaxter Jerome Corsi).

This week, Issa indicated that he will continue to pursue such small-time, seemingly bogus concerns with a tweet linking to an article complaining about stimulus project signage in the Greeley Gazette: "Citizen-watchdogs & new technology made this (http://tinyurl.com/28egdr5) possible ... how can we do more of this? Would love your thoughts."

It is hard to imagine that road signs represent more than a minuscule fraction of 1 percent of the $787 billion stimulus budget, but then again Republicans constantly bemoan minor spending items -- such as congressional earmarks -- that actually have almost no real fiscal impact. Perhaps their budgetary record is historically so miserable because they just can't do the arithmetic. But that can scarcely be true of Issa, an entrepreneur who earned his own huge fortune and is still the wealthiest member of Congress.

Certainly Issa should provide serious oversight of the stimulus spending, which is a fundamental congressional responsibility assigned to his committee. He ought to stop taking potshots at road signs -- and instead start examining the administration's record in selecting and contracting projects.

Of course, that might not be quite as much fun as stirring up the Tea Party rubes with diversions like the road sign "issue." According to the independent watchdogs at Pro Publica and Politifact, the administration has succeeded in contracting stimulus projects at considerably lower cost than originally anticipated so far. Lower bidding has meant millions of dollars saved, with those saved funds in turn financing thousands of additional projects -- and many thousands of jobs -- across the country.