Ky. senator privately advocated an Iraq pullout even as he publicly blasted Democrats for the same position 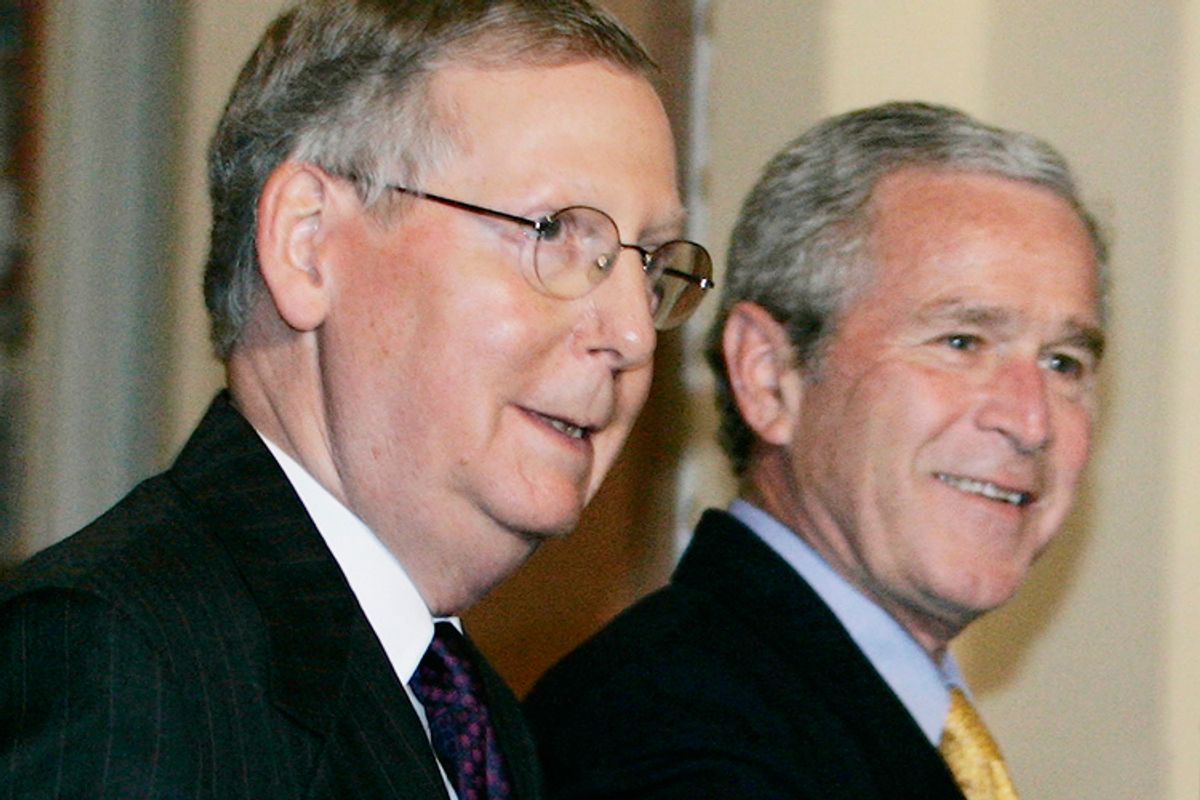 Before the 2006 midterm elections in which Republicans ultimately took a clobbering, Sen. Mitch McConnell asked President Bush in a private Oval Office meeting to pull some troops out of Iraq in order to boost the GOP's chances, Bush reports in his new memoir.

And in the same month -- September 2006 -- that McConnell made his private request, he publicly blasted Democrats for calling for a reduction of troops in Iraq, saying that their position endangered Americans.

"The Democrat leadership finally agrees on something -- unfortunately it's retreat," McConnell said in a Sept. 5, 2006, statement in response to a Democratic letter asking Bush to change his Iraq policy. Using blistering language, McConnell continued:

"Whether they call it 'redeployment' or 'phased withdrawal,' the effect is the same: We would leave Americans more vulnerable and Iraqis at the mercy of al-Qaeda, a terrorist group whose aim -- toward Iraqis and Americans -- is clear."

The Democratic letter had asked Bush to begin "the phased redeployment of U.S. forces" from Iraq.

Despite his public statement blasting Democrats for advocating "retreat," McConnell, then the Republican whip in the Senate, requested a private meeting with Bush to urge essentially the same policy shift Democrats were advocating. Bush ultimately did the opposite, ordering more troops to Iraq in the wake of the election.

The divergence of McConnell's public and private positions on Iraq is all the more remarkable considering that he attacked Democrats in the strongest of terms, accusing them of endangering U.S. security.

Besides highlighting that contradiction, the episode raises questions about McConnell's apparent wish to make foreign policy decisions based on his party's electoral prospects at home. And it suggests that McConnell did not truly believe the Iraq war was necessary to preserve U.S. security; if he did, he presumably would not have advocated pulling troops out to help win an election.

Clearly, this anecdote is self-serving for Bush. But a spokesman for McConnell did not issue a denial when asked about it by the Courier-Journal of Louisville, Kentucky, saying only that the senator "does not comment on any advice he may have given the president on improving his political standing." We have put in an inquiry with McConnell's office to see if he has any other comment.

In September 2006, with the midterm elections approaching, my friend Mitch McConnell came to the Oval Office. The senior senator from Kentucky and Republican whip had asked to see me alone. Mitch has a sharp political nose, and he smelled trouble.

"Mr. President," he said, "your unpopularity is going to cost us control of the Congress."

Mitch had a point. Many Americans were tired of my presidency. But that wasn't the only reason our party was in trouble. I flashed back to the Republican congressmen sent to jail for taking bribes, disgraced by sex scandals, or implicated in lobbying investigations. Then there was the wasteful spending, the earmarks for pork-barrel projects, and our failure to reform Social Security despite majorities in both houses of Congress.

He was not alone. As violence in Iraq escalated, members of both parties had called for a pullout.

"Mitch," I said, "I believe our presence in Iraq is necessary to protect America, and I will not withdraw troops unless military conditions warrant." I made it clear I would set troop levels to achieve victory in Iraq, not victory at the polls.