We've been dealing with the same threats for decades. But we used to be a lot calmer about it, less self-defeating 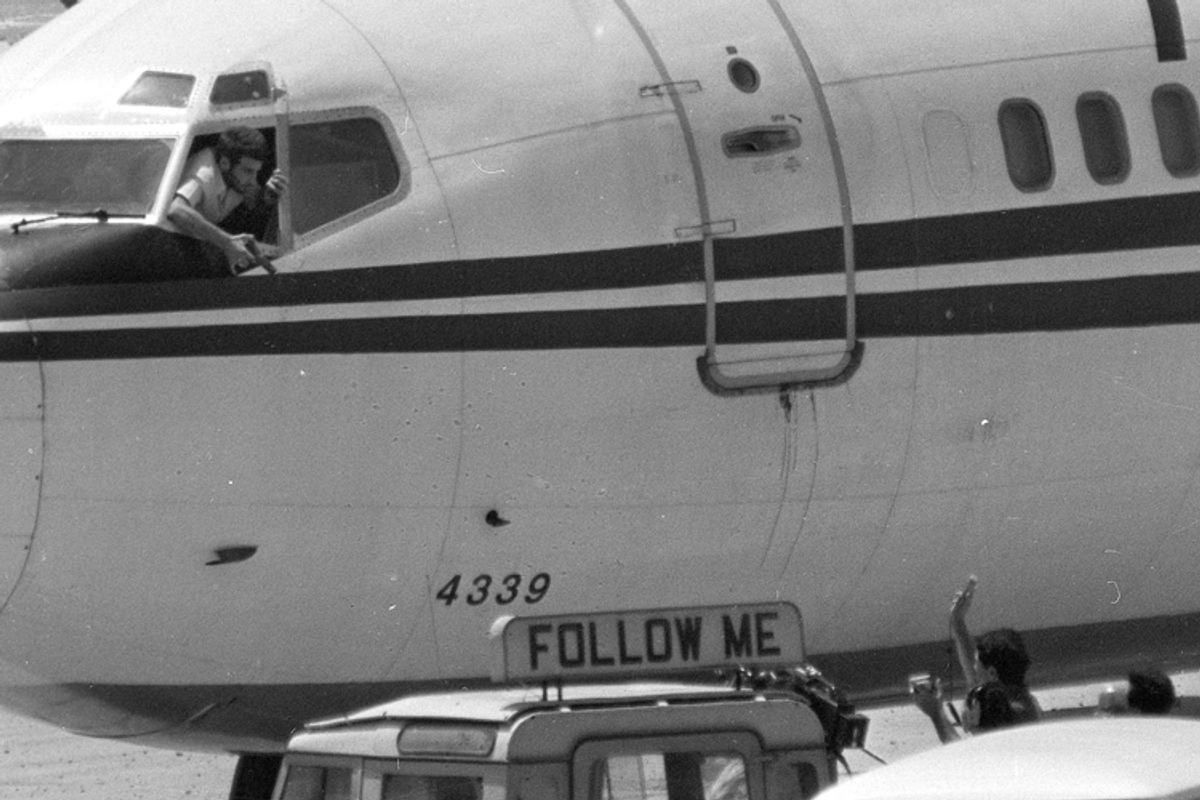 A hijacker points his pistol from the cockpit of TWA Flight 847 as an ABC news crew approaches the jet for an interview at Beirut International Airport on June 19, 1985.
--

Middle Eastern terrorists hijack a U.S. jetliner bound for Italy. A two-week drama ensues in which the plane's occupants are split into groups and held hostage in secret locations in Lebanon and Syria.

While this drama is unfolding, another group of terrorists detonates a bomb in the luggage hold of a 747 over the North Atlantic, killing more than 300 people.

Not long afterward, terrorists kill 19 people and wound more than a hundred others in coordinated attacks at European airport ticket counters.

Five months after that, another U.S. airliner is stormed by heavily armed terrorists at the airport in Karachi, Pakistan, killing at least 20 people and wounding 150 more.

Things are quiet for a while, until two years later when a 747 bound for New York is blown up over Europe killing 270 passengers and crew.

Nine months from then, a French airliner en route to Paris is bombed over Africa, killing 170 people from 17 countries.

That's a pretty macabre fantasy, no? A worst-case war-game scenario for the CIA? A script for the End Times? Except, of course, that everything above actually happened, in a four-year span between 1985 and 1989. The culprits were the al-Qaidas of their time: groups like the Abu Nidal Organization and the Arab Revolutionary Cells, and even the government of Libya.

First on that list was the spectacular saga of TWA Flight 847, a Boeing 727 commandeered by Shiite militiamen in June of '85. Even before that crisis ended, Sikh extremists would blow up Air India Flight 182 off the coast of Ireland -- the deadliest civil aviation bombing in history. The Abu Nidal group then murdered 20 people at the airports in Rome and Vienna, followed in short order by the bombing of TWA Flight 840 as it descended toward Athens. Abu Nidal struck again in Karachi, attacking a Pan Am 747 with machine guns and grenades. Then, in December 1988, Libyan operatives planted the luggage bomb that brought down Pan Am 103 over Lockerbie, Scotland, in what would stand until 2001 as the worst-ever terror attack against a U.S. target. The Libyans later used another luggage bomb to take out UTA Flight 772 over Niger in September 1989.

Also occurring in that same span were the non-terrorist bombing of a Korean Air Lines 707 and the downing of a San Francisco-bound Pacific Southwest Airlines flight by a recently fired employee who burst into the cockpit and shot both pilots.

I bring all of this up for a couple of reasons.

If nothing else, it demonstrates how quickly we forget the past. Our memories are short, and growing shorter, it seems, all the time. Our collective consciousness seems to reinvent itself daily, cobbled from a media blitz of short-order blurbs and 30-second segments. There will be a heavy price to pay, potentially, for having developed such a shallow and fragile mind-set.

With respect to airport security, it is remarkable how we have come to place Sept. 11, 2001, as the fulcrum upon which we balance almost all of our decisions. As if deadly terrorism didn't exist prior to that day, when really we've been dealing with the same old threats for decades. What have we learned? What have we done?

Well, have a look at the debased state of airport security today. We continue enacting the wrong policies, wasting our security resources and manpower. We have implemented many important changes since Lockerbie, it's true (actually, many of the new protocols are post-9/11), but much of our approach remains incoherent. Cargo and packages go uninspected while passengers are groped and harassed over umbrellas and harmless hobby knives. Uniformed pilots are forced to remove their belts and endure embarrassing pat-downs.

And what of our rights as citizens? Body scanners are in the news this week. If a decade ago people were told that a day was coming when passengers would need to be looked at naked before getting on a plane, nobody would have believed it. Yet here we are, and what might be next?

Yes, I remember the underwear bomber. But where do we draw the line? Do we turn our airports into fortresses and surrender our freedoms and privacy, in the name of something that is ultimately impossible: total safety?

"What have we done?" is a chilling enough question. But here's a scarier and more important one: What will we do when they strike again?

Because they will, and I shudder to imagine our response.

Look again at that list above. All of those tragedies, in a four-year span, with some of the attacks actually overlapping. Try to imagine a similar spell today. Could we handle even a fraction of such disaster?

In the 1980s we did not overreact. We did not stage ill-fated invasions of distant countries. People did not cease traveling and the airline industry did not fall into chaos. We were lazy in enacting better security, perhaps, but as a country our psychological reaction, much to our credit, was calm, measured and not yet self-defeating.

This time, thanks to the wholly unhealthy changes in our national and cultural mind-set, I fear it will be different.

As an airline employee I worry greatly about this. If 2001 was any indication, we are doomed to overreaction that will ground planes and send Americans scurrying into their hidey-holes. Along with many thousands, or even millions, of others, I am liable to find myself once again unemployed. Unemployed not for any good or practical reason, but because we, as a nation, have grown weak and prone to panic.

"The terrorists have won" is a refrain I don't like using. It's sensationalist and ignores inherent complexities. But for the moment, I can't think of a better way of putting it.