Enjoy that Democratic Senate while it lasts 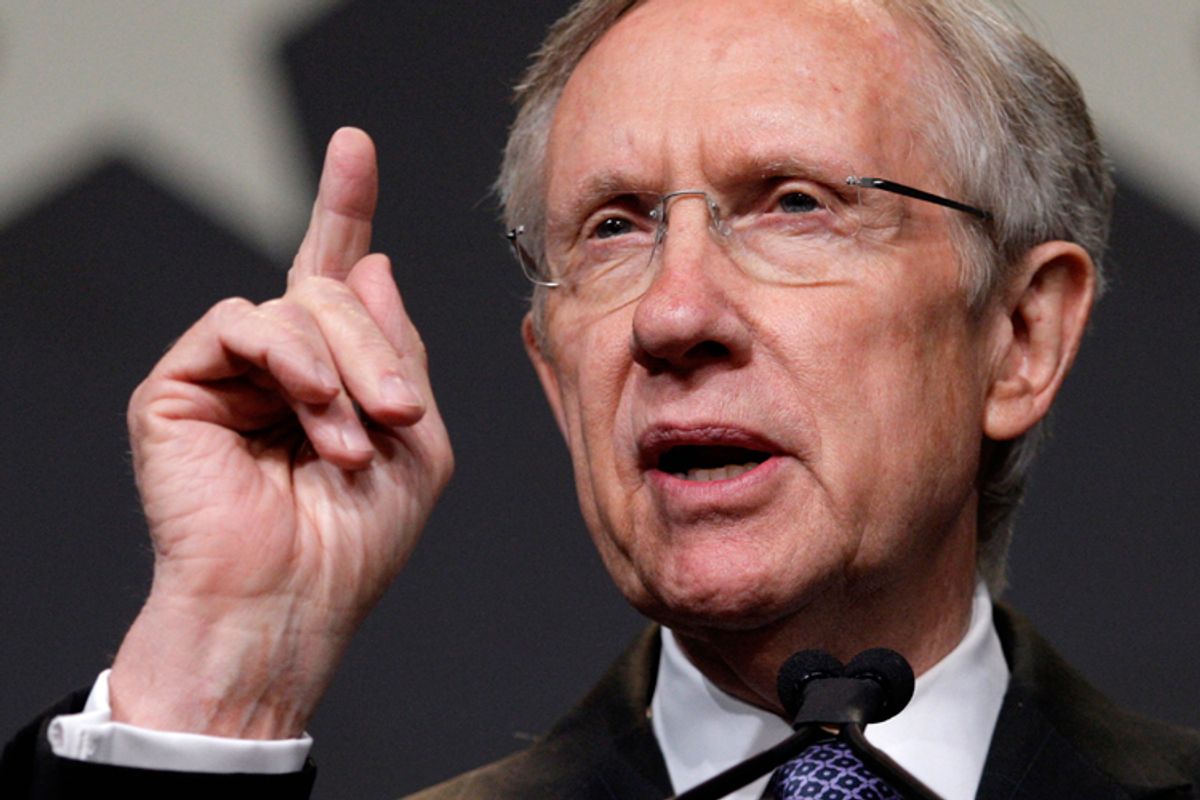 His thoroughly unlikely (and Tea Party-aided) reelection triumph in Nevada gave Harry Reid a new lease on life as the Senate's majority leader -- but it may not last for long.

The Senate that Reid will return to in January will have 53 Democrats -- six fewer than there were before the election, but not a bad total considering the trying climate the party faced this fall. Assuming there are no party switches or resignations between now and then, Democrats can afford a net loss of no more than three seats (or two, if a Republican were to win the presidential race) in the '12 election if they want to preserve their majority -- a task much easier said than done.

The problem for Reid and the Democrats has to do, ironically enough, with success they've enjoyed in previous elections -- specifically in 2000 and 2006, the last two cycles in which the Senate class that will be up in '12 was on the ballot. In 2000, even as Al Gore was battling George W. Bush to a draw at the presidential level, Democrats picked up four Senate seats, bringing them into a 50-50 tie with the GOP in the chamber. Then, six years later, they exploited a poisonous anti-GOP national climate to knock off six Republican incumbents, a result that handed Democrats control of the chamber. The combined effect of these two elections was to produce one gigantic Democratic class of senators -- after the '06 election, the party controlled 24 of the 33 seats that would be up in '12. That number was reduced to 23 last January when Scott Brown won a special election to fill the final two years of Ted Kennedy's term, but the reality remains the same: Democrats will have an awful lot of turf to defend in 2012 -- much of it in Republican-friendly states.

At first glance, the seats of at least half of the Democrats who will be up in two years could be vulnerable. Missouri's Claire McCaskill, Montana's Jon Tester, North Dakota's Kent Conrad, Nebraska's Ben Nelson and West Virginia's Joe Manchin all represent states that didn't vote for Barack Obama in 2008 and that, to varying degrees, remain hostile to the president. And while Florida, Ohio and Virginia all did vote for Obama, his margin in each state was hardly overwhelming -- meaning that Bill Nelson, Sherrod Brown and Jim Webb could find trouble too. Ditto for Bob Casey (Pennsylvania), Herb Kohl (Wisconsin) and Debbie Stabenow (Michigan), all of whom represent states that went strongly for Obama but that turned around and elected Republican governors last week. Even New Jersey's Bob Menendez, whose state last elected a Republican to the Senate in 1972, could find himself sweating under the right conditions: His 2006 opponent, Tom Kean Jr., may be interested in running again and Garden State political observers are whispering about polls that supposedly put the Republican ahead of Menendez. And this isn't even mentioning Joe Lieberman, the Connecticut independent who now caucuses with Democrats.

The GOP, by contrast, will only have to defend four seats from states that voted for Obama: Indiana (Richard Lugar), Maine (Olympia Snowe), Massachusetts (Brown) and Nevada (Ensign). If Lugar wins the Republican nod (and there's no guarantee he will -- more on this later), it's virtually impossible to see him losing in the general election. The same can be said of Snowe. Both are broadly popular political institutions in their home states. Brown should have a tougher time in Massachusetts, but his popularity remains high; he may yet survive. The scandal-tainted Ensign is by far the most vulnerable Republican due to face the voters. If he runs and wins the GOP nomination -- a big if -- he'll be ripe for defeat in the fall; if he opts not to run -- or loses in a primary -- Republicans will have a better chance of holding the seat.

Otherwise, it's hard to see Republicans losing any of their seats in 2012, at least from this vantage point. Their remaining incumbents are from Arizona (Jon Kyl), Mississippi (Roger Wicker), Tennessee (Bob Corker), Texas (Kay Bailey Hutchison), Utah (Orrin Hatch) and Wyoming (John Barrasso). Even if some of these incumbents opt not to run (or lose in primaries), their states are friendly enough to the GOP that Democratic takeovers would be unlikely -- not impossible, but unlikely.

This means that if Republicans lose two of the seats they now hold, Democrats would have to retain 18 of the 23 they now have in order to keep the Senate -- 19 if they were to lose the presidency.

Whether competitive races emerge in many states will depend, obviously, on the national climate. An improved economy will boost President Obama's standing and bolster the prospects of every Democrat running on the ballot with him, just as stagnant (or worsening) economic conditions will jeopardize seats that, for now, Democrats can't imagine losing. Candidate recruitment (which is related to the climate) will matter too, as will the strength (or lack thereof) of the GOP's presidential nominee.

There is one other important factor to note, though, and it could potentially save the Democrats: the Tea Party effect. Republicans lost three Senate races that they should have won this fall -- in Delaware, Nevada and Colorado -- because their conservative base (aka the Tea Party movement) was in revolt and insisted on nominating seriously flawed and unelectable candidates. The base's restiveness may die down between now and '12 -- or it may remain steady, or even intensify. As I've written, today's Republican Party calls to mind the GOP of the Carter era, when the burgeoning "New Right" base mounted a series of primary challenges (many of them successful) in both the 1978 and 1980 cycles. If the Tea Party spirit prevails in '12, Democrats might once again be spared defeats in races they have no business winning. They might also find unexpected targets; what if, for instance, Tea Partiers knock out Lugar in a GOP primary and instead nominate a Christine O'Donnell-ish candidate?

It's not impossible that Democrats will keep their Senate majority in 2012. But they'll need to catch some breaks to do it.