What to fear from "The Pedophile's Guide"

Furor over the e-book is predictable, but experts explain the strange, troubled thinking behind its creation 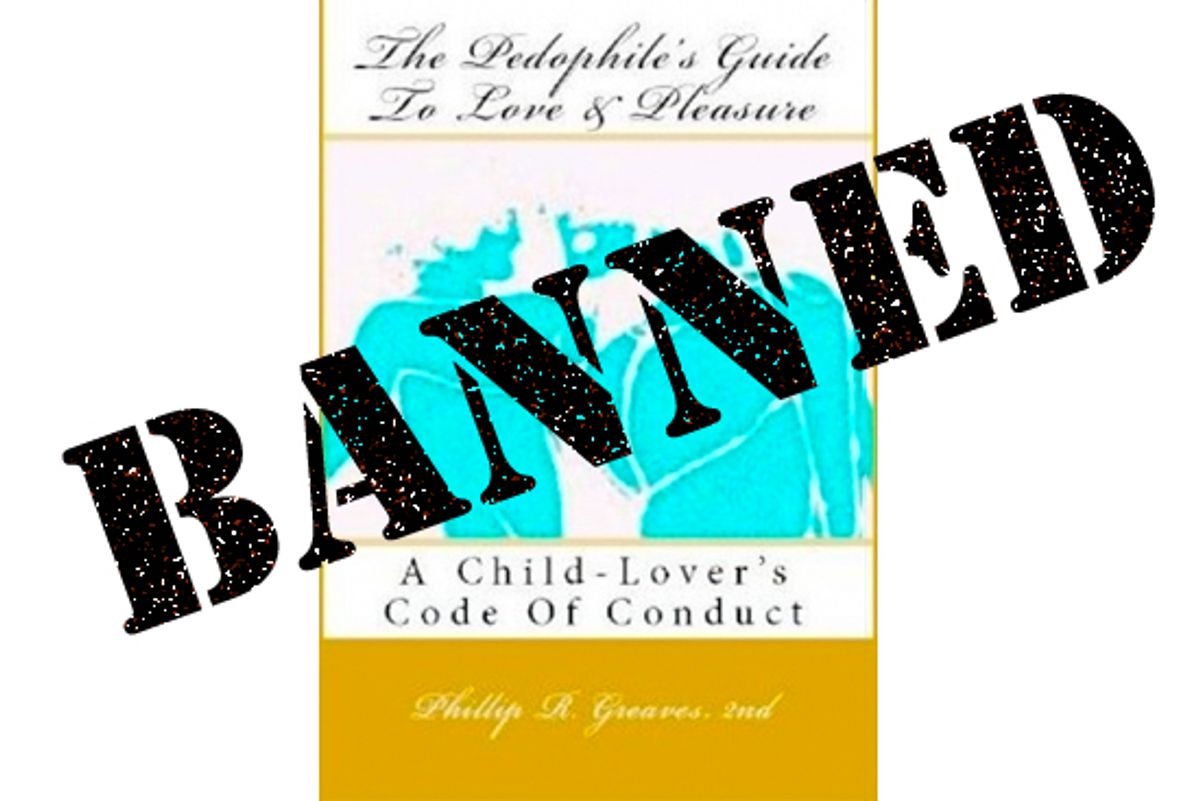 The appearance of the e-book "The Pedophile's Guide to Love And Pleasure: A Child-Lover's Code of Conduct" by Phillip R. Greaves II has garnered a predictable response. Customers threatened to boycott, the media got involved and, after brief resistance, Amazon yanked the book from its virtual shelves. The 47-year-old's self-published book claims to be an attempt to "make pedophile situations safer for those juveniles that find themselves involved in them, by establishing certian [sic] rules for these adults to follow." And the controversy it's kicked off is a classic case of the general public successfully uniting against an easy villain -- with little gained beside the reinforcement of social norms. So, I spoke with some experts on pedophilia about the potential impact of Greaves' book, and the psychological mechanisms that may be at play behind his argument that an adult "kissing and fondling" a child isn't "that big of a problem."

Dr. Fred Berlin, director of the Sexual Behavior Consultation Unit at Johns Hopkins, compares the potential impact of books like this to pro-anorexia online support groups. "There's literature out there on the Internet suggesting that it's OK to be [sickly] thin and that society shouldn't force you into a different lifestyle," he explains. These sites might not be making women anorexic, but it certainly encourages them to engage in self-harm and, in Greaves' case, harm to others. Dr. Wesley B. Maram, a forensic and clinical psychologist, agrees: "Somebody who is struggling with pedophilia" might "feel support seeing this." He says "it may give them some comfort, it might encourage them." However, pulling the e-book from Amazon doesn't solve that particular problem. Amazon made a savvy business decision, perhaps, but ultimately it won't do much to stop the book from being distributed. Not only is the material likely to pop up elsewhere, but there are countless other online resources for pedophiles looking for a sense of community and pointers like those offered up in the book. The book has been merely banished to the darkest corners of the Web.

The actual arguments made within the book are based on a false premise: that a pedophile can have a healthy sexual relationship with a child, as long as they follow certain guidelines. Berlin, who loomed large in Daniel Bergner's fascinating book "The Other Side of Desire," puts it plainly, "In my opinion, no child is worse off for not having been sexual with an adult, and lots of kids are confused and troubled and certainly potentially harmed by the experience." He allows that not every child is "harmed permanently" by such experiences, but he says, "I do think every child is wronged." Dr. Gerry D. Blasingame, vice-chair of the California Coalition on Sexual Offending, points out that Greaves' restrictions -- penetration is off-limits, but "kissing," "fondling" and other "loving" behavior is allowed -- wrongly assumes that most sexual abuse is physically violent. The reality is that most cases involve just "kissing, fondling and non-penetrating behavior," he says, and the reality, based on the countless police reports he's read, is that children report these experiences as frightening and confusing.

Interestingly enough, part of Greaves' evidence that "pedosexuals," as he calls himself, do not necessarily harm children is that he was "introduced to oral sex" by a woman at the age of 7. Berlin speculates that Greaves' childhood abuse could be the foundation for his current philosophy. He adds, "I have no way of knowing, but it's possible his interest in children might have developed because [he] became warped as a consequence of that early life experience." As Blasingame puts it, there are "lots of streams that feed into the river of sexual development," and early sexual abuse actually alters the brain's physical makeup. He says people tend to develop "thinking errors" surrounding abuse, what's called "splitting" in therapist-talk: "If my father was physically abusive and I'm a child it would be very difficult to think of my father as a bad guy," he explains. One way for a child to reconcile his love for his father with the sexual abuse he's experienced is to recast it as a positive, loving experience.

The upside of this controversy is that we're having a conversation about the harm of pedophilia. The downside is that the conversation is largely limited to condemnation. "It's so easy to demonize these people because the emotion tied to these things is understandably so strong," says Berlin. He points out that we are constantly delivering public service announcements to people struggling with depression, eating disorders, drug abuse and the like, telling them to "come and get help" -- but rarely do we direct that same message to pedophiles. "What I wish society would recognize is that good people can be afflicted through no fault of their own with these attractions," he says. "To simply demonize these folks rather than reach out and help them is not serving their interests, or our interests as a society."