Will Olympia Snowe be the next victim of the GOP base's vengeful purification push? 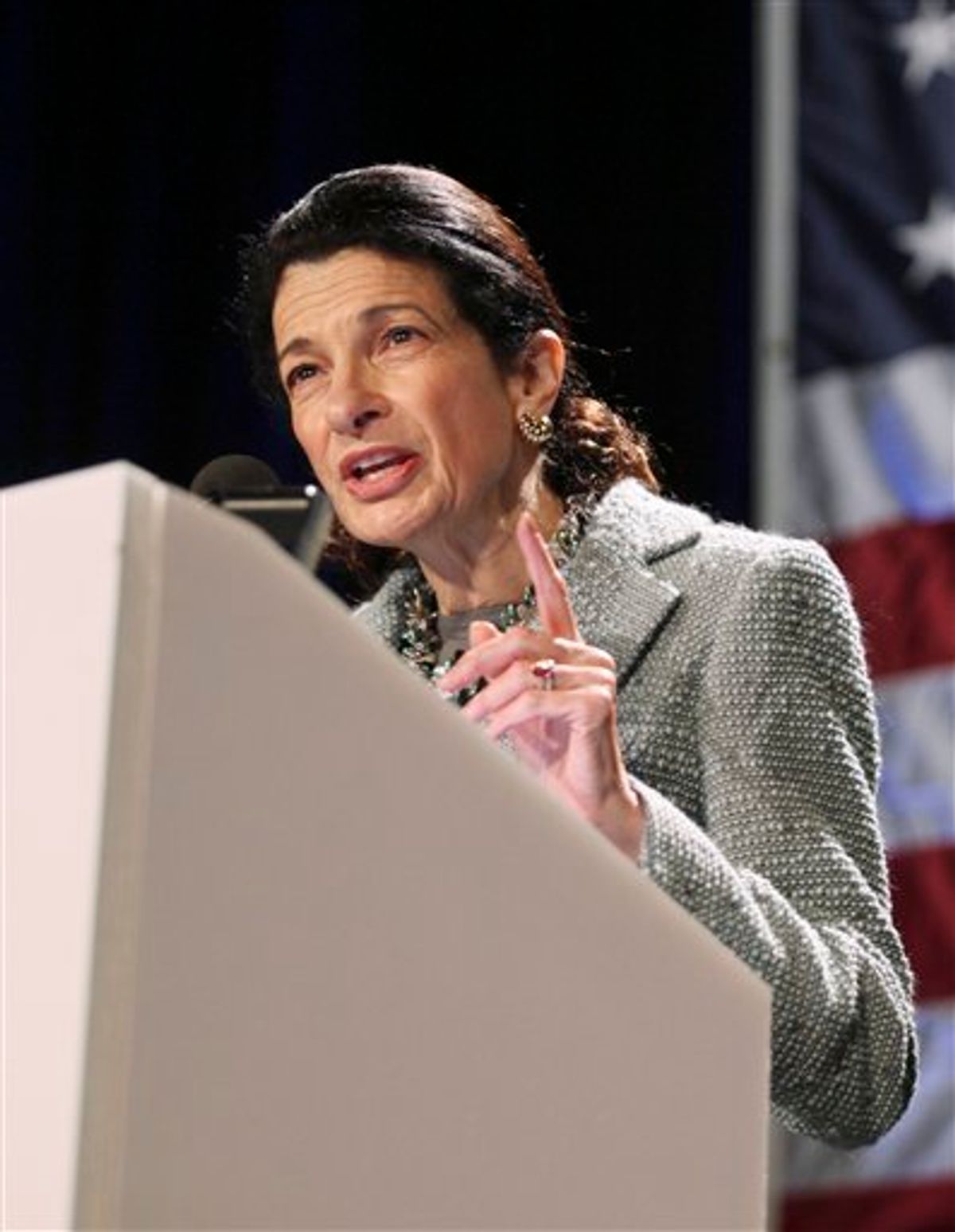 FILE- In this May 7, 2010 file photo, Sen. Olympia Snowe, R-Maine, speaks in Portland, Maine. The government is expected to announce this week that more than 58 million Social Security recipients will go through another year without an increase in their monthly benefits. Snowe was the only Republican to support a second Social Security bonus payment, like the one-time $250 in 2009, when it became clear that seniors wouldn't get an increase in monthly benefit payments in 2010; the bill died from lack of support. (AP Photo/Joel Page, File) (AP)
--

The National Review's Brian Bolduc brings news that a conservative who is part of the Tea Party movement will soon announce a challenge to Sen. Olympia Snowe in the 2012 Republican primary:

He has told me he is running but has asked me to keep things vague so as not to step on his announcement, which he plans to make early next year. He comes out of the tea-party movement and I have every reason to believe he’s serious about this.

Vague as it is, Bolduc's report makes perfect sense. Snowe, of course, is one of the most liberal (or least conservative) Republicans left on Capitol Hill -- and as this year's primaries showed, the GOP base in the age of Obama (aka the Tea Party) has essentially zero tolerance for ideological dissent, especially from entrenched officeholders. Now, is there any reason to believe the Tea Party rage will die down in the next two years? A strong parallel can be drawn between the GOP base's mood now and in the Carter era, when conservatives launched a series of primary challenges in both the 1978 and 1980 elections.

So of course Snowe will be challenged from the right. And of course she should be worried: If the national Tea Party network engages in Maine (and it's hard to believe they won't, given their low regard for Snowe), it really won't matter who's running against her; she'll be in grave danger of losing a primary. The Christine O'Donnell-Mike Castle contest in Delaware this year is as sound a model as there is.

The New Republic's Jonathan Chait argues that Snowe should now "make a plan to hold the seat as an independent or Democrat. The chances of surviving that way are way higher than the chances of making it through a Republican primary." He's half right. As I wrote on Wednesday, Snowe would be well-advised not to switch parties and try to run as a Democrat. Arlen Specter's experience in Pennsylvania this year demonstrates the blowback potential of that approach. Conservatives may see her as a sellout, but in a Democratic primary, her support for (among others) George W. Bush and Paul LePage, the right-winger who narrowly won last week's gubernatorial election, will make formidable weapons for a challenger.

For Snowe, the independent route makes far more sense. For one thing, Maine is more hospitable to third-party candidates than just about any other state. The structural and ballot barriers that exist in, say, New York or Pennsylvania just aren't present in Maine, which elected an independent governor in 1994  (Angus King, who was reelected in a 40-point landslide in 1998) and which nearly elected another one last week (Eliot Cutler, who fell one point short against LePage). Moreover, Snowe is broadly popular with Maine's electorate; her only real problem is with the Tea Partiers who hold sway in GOP primaries. In other words, more than anyone else in the Senate, Snowe is well-equipped to wage a successful independent campaign. I haven't seen any poll numbers, but I strongly suspect she'd win comfortably -- much like King did in his '98 reelection bid -- even if both parties fielded credible candidates.